“One that would have the fruit must climb the tree.”
-- Thomas Fuller

Looking at Mathieu Perreault’s 2013 season with the Caps it is helpful to take a moment and look back at how he got here.  Caps fans will recall that he was a sixth-round pick in the 2006 Entry Draft, the 177th overall pick.  From that draft, 85 draftees have seen at least one game of NHL action, 74 of them skaters.  Only one of those 74 skaters picked after Perreault – Derek Dorsett (drafted by Columbus 189th overall, now of the New York Rangers) – has played in more NHL games than the 159 recorded by Perreault through the 2013 season.  No player picked after Perreault has more goals than the 33 he has, and he has more goals than 43 skaters selected ahead of him.  Only 25 of those skaters have more career points.

Perreault has come a long way.

That said, he is still a player in search of a role.  Perreault, normally thought of as an offense-oriented player, logged most of his 5-on-5 minutes with Jason Chimera and Eric Fehr, with a healthy sprinkling of time with Joel Ward thrown in.  These three are not generally thought of as offensive drivers, but Perreault seemed to get more out of them on that side of the puck than others with whom they played.  In the case of all three, they recorded more team goals for at 5-on-5 per 20 minutes (GF20 at stats.hockeyanalysis.com) with Perreault than they did when apart from him.  Their possession numbers were better with Perreault as well, as their Corsi for and Corsi against per 20 minutes at 5-on-5 attest (stats.hockeyanalysis.com).

What Perreault lacked individually was a sense of consistency, at least as revealed in his “tens.”  He played in only five of the Caps’ first ten games, failing to record a point.  He lit up in the next two ten-game splits, playing in a total of 16 of the 20 games, going 5-7-12, plus-7 in those contest.  He regressed in his fourth ten-game split, playing in all ten games to a 0-1-1, minus-2 scoring line, then rebounding some in his last eight games with a 1-3-4, plus-4 finish.

Perreault did evidence a gift for setting up teammates.  At 5-on-5 no Capital forward had a better first assists-per-60 minutes figure than Perreault.  And this was with players, by and large, who are not consistent goal scorers. And whatever one’s impression of Perreault’s defense, the results while he was on the ice did not feed a narrative of his being suspect on that side of the puck.  At 5-on-5, among 14 Caps forwards playing in at least 20 games he had the fifth best goals against per 60 minutes and had a positive differential between goals scored against on ice versus goals scored against off ice (+0.23; numbers from behindthenet.ca).

His individual possession numbers looked good as well, recording the second best raw Corsi on-ice and the second-best Corsi on-ice relative to off-ice.  It all translated into a PDO value (sum of shooting percentage and save percentage on ice) that was second best on the team at 5-on-5 among forwards playing in at least 20 games.  The picture painted is one of a solid year, but there is a “but”… 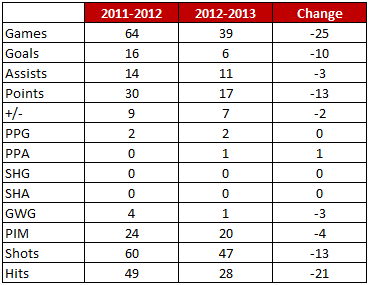 Odd Perreault Statistic… “Two.”  Here is the "but."  In 22 games against teams outside the Southeast Division, Perreault recorded a total of two even-strength points, both in the same game, a 5-3 win over the Buffalo Sabres on St. Patrick’s Day when he recorded a goal and an assist.

Game to Remember… April 23rd vs. Winnipeg.  It was a long road that the Caps took to their April 23rd game against the Winnipeg Jets, but there they were, finally in a position to clinch the Southeast Division.  The Caps started fact with goals from Matt Hendricks and Jason Chimera in the first period, Perreault earning he primary assist on the latterwhen he played catch behind the Jets’ net with Chimera before setting him up for the score in front of goalie Ondrej Pavelec.  Winnipeg tied the game with a pair of goals in the second period, then Nicklas Backstrom returned the Caps to the lead late in the period.  The period might have ended with the Caps up, 3-2, but Perreault converted what would be a broken play with less than three minutes left in the period.  It started when Perreault entered the Jet’s zone in the middle of the ice.  He left a drop pass for Eric Fehr, who had his shot attempt blunted by the stick of Alexander Burmistrov.  Jack Hillen followed up on the loose puck and fired it on goal, Pavelec making the initial save.  But Perreault stuck his nose – or more precisely, his stick – into the pile and chipped the puck past Pavelec.  When Winnipeg scored in the third period, that became the potential game-winning goal, and when the Caps held on for the 5-3 win, it was the Division-clinching goal for the Caps.

Game to Forget… January 19th at Tampa Bay. With a new coach in town, players want to make a good first impression.  Even those who might be role players, such as Mathieu Perreault.  Such was the case on Opening Night when the Caps took the ice in Tampa to face the Lightning.  If good first impressions were what Perreault was trying to give, things did not work out quite that way.  On his first shift of the game, Tampa Bay scored.  Over the first two period he skated a total of four shifts of no particular consequence, save for that goal against.  Then in the third period he took a penalty, the Lightning scoring what would be the game-winning goal on the ensuing power play. It was his last shift of the night.  Five shifts, 3:52 in ice time, no shots attempted, no points, a penalty and a minus-1.  Good impression…not.

Post Season… Things looked pretty good for Perreault in Games 1-4 of the first round series against the New York Rangers.  A goal, three assists, plus-3.  But then there were those last three games… no points, only three shots on goal.  Sure, he finished the round tied for the team lead in points, tied for the team lead in plus-minus, and tied for the team lead in goals.  But none of that came in Games 5-7 when the Caps lost two of three games and scored only two goals in the process, none in Games 6 or 7.  His personal numbers looked good over seven games (second in Corsi on-ice at 5-on-5 among forwards playing in at least four games, second in team shooting percentage on ice, second in on-ice team save percentage, second best PDO value), but in context, it was good early, not so good late…just like the rest of the club.

It is a bit hard to know what to make of Perreault’s season.  On the one hand, he did quite well with linemates who might not otherwise be thought of as offensive stalwarts.  On the other, he lacked a certain consistency in his production.  On the one hand, his underlying numbers looked rather good, even in the post season.  On the other, he was invisible in the last three games of the playoff series against the Rangers (he was by no means alone).  On the one hand, his points pace was not far off his career-best pace of last year, this despite his personal shooting percentage dropping by more than half.  On the other, most of that was built on his production against the Southeast Division, not the strongest of competition.  We are left at the end of the season where we started with Perreault, looking at a lot of questions.  Can he be counted on for a solid 82-games of play (64, set last season, remains his career high)?  Can he assume a steady role as a number-two center, a question that takes on more urgency with the uncertainty surrounding Mike Ribeiro’s return to the Caps?  Can he stand up to the increased physical abuse he might endure next season in the new division into which the Caps have been realigned?  It has been a long climb from being that 177th overall draft pick in 2006.  But this season, Perreault seems to have paused in that climb.  It is not entirely of his own doing, but the climb will resume only when those lingering questions are addressed.

Posted by The Peerless at 10:51 PM No comments: