The Peerless Prognosticator is ON THE AIR!!! -- Game 47: Capitals at Blue Jackets, January 27th

The party is over, the cannon smoke has drifted away, the lights on the scoreboard that burned out in the goal-fest of the All-Star Game have been replaced, and it is back to the winter grind for the 30 teams of the National Hockey League.

For the Washington Capitals, the “second half” of the season opens at the site of the All-Star Game, as they visit the Columbus Blue Jackets at Nationwide Arena.  The Caps open the post-All-Star game portion of their schedule in a tightly-bunched portion of the Eastern Conference standings.  Washington is tied with the Boston Bruins in seventh place in standings points (57) but hold the seventh spot by virtue of having played fewer games than the Bruins.  The Caps are only one point behind the New York Rangers for sixth place in the conference (and third in the Metropolitan Division), and they are within striking distance of Pittsburgh (60 points) for fifth place and Montreal (61 points) for fourth place in the conference.

On the other hand, the Blue Jackets are on the outside looking in.  Columbus comes out of the All-Star Game break in 13th place in the Eastern Conference, 14 points behind Boston and Washington.  Already a team struggling to maintain a grasp on sliver of hope for a playoff spot (4-6-0 in the new year), they lost former Vezina Trophy-winning goalternder Sergei Bobrovsky for the next 4-6 weeks to a groin injury.

Filling that spot is going to be difficult.  Bobrovsky, while not performing at quite his Vezina Trophy level of 2012-2013, at least had a career body of work that suggested he could be depended upon to provide solid, reliable minutes in goal.  His immediate prospects as replacements – Curtis McElhinney and Anton Forsberg, the other goaltenders to have appeared for Columbus this season – do not inspire that sort of confidence.

McElhinney would appear to be getting the call to log the heavy minutes in Bobrovsky’s absence (Forsberg has only two NHL appearances).  A journeyman who is in his seventh season and his fifth team, McElhinney has never in any of his five seasons appearing in more than ten games (including this season) posted a goal-against average below 2.70, nor recorded a save percentage better than .910.  Last season with Columbus was arguably his best in the NHL – 10-11-1, 2.70, .909, with two shutouts.  He is behind that pace this season (4-6-1, 2.98, .907).  His picture is not as clear as that, however.  After what was a ghastly start to his season, McElhinney has put together a string of good efforts.  In his first eight appearances he was 0-5-1 (one no-decision), 3.76, .887.  In his last eight appearances he is 4-1-0 (three no-decisions), 2.18, .930.  Doing that while getting number one minutes will be his challenge.  He is 0-2-0, 5.61, .825 in two appearances against the Caps.

Columbus might have to rely on more offensive output to make up for their goaltender’s absence.  With 24 goals scored in their ten games in 2015, one would think that is not going to be enough on a nightly basis (2.40/game) to lift the Blue Jackets back into contention.

Columbus had two representatives at the All-Star Game – Ryan Johansen (the game’s most valuable player) and Nick Foligno (team captain).  Each has done his part to try to keep the Blue Jackets afloat in their recent slump.  Until very recently, Johansen has been a machine.  From December 18th through January 16th – a span of 13 games – Johansen registered a point in each game and went 8-8-16.  While he was held scoreless in his last two games heading into the All-Star Game break, he is among the hottest players in the league.  In eight career games against the Caps, Johansen is 3-3-6, minus-2.

Foligno was almost as hot as Johansen over a similar period of games.  Starting with a two-goal, three-point night against the Caps on December 18th, Foligno went 4-10-14, plus-1, over an 11-game stretch.  He has been especially productive against the Caps this season.  Four of his 18 goals have come at the expense of the Caps, twice as many as he has against any other opponent (he has a pair of two-goal games), and his five points is the most he has against any opponent this season. 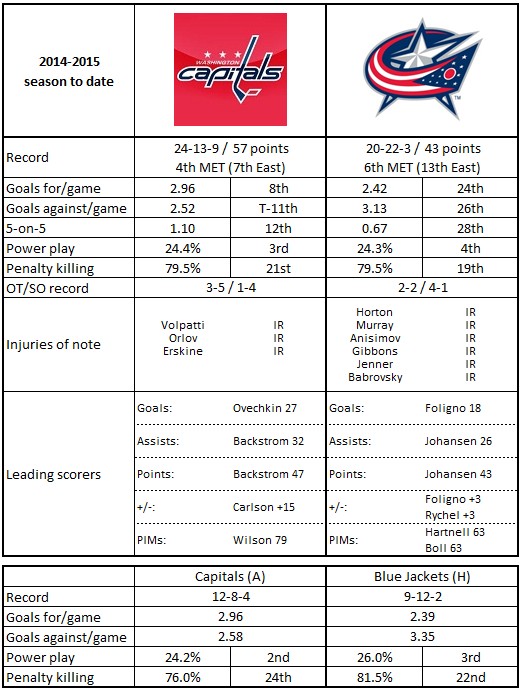 1.  Columbus is a minus team in each period this season, but it gets worse for the Blue Jackets as time goes on.  They are minus-5 in the first periods of games and minus-9 in the second periods of games.  Third periods are another matter.  Their 54 goals allowed is the third-highest total in the league, and their minus-18 is fourth worst goal differential in the league.

4.  Johansen has been a productive offensive player this season, but there is another side to that.  Only five of 527 forwards dressing for games this season have been on ice for more goals against (51 in 45 games), and he is the team “leader,” by far, in that statistic among forwards (Foligno: 38 in 44 games).

1.  Alex Ovechkin has a peculiar career record in terms of his pre- and post-All-Star Game performance.  On a per 82-game basis:
2.  Buffalo has three wins when trailing first this season.  So, too, do the Carolina Hurricanes.  That’s two more wins when trailing first than Washington has, the Capitals having the worst record in the league (1-12-5/.056).

3.  The Capitals are the most efficient power play team in the league by one measure.  They score one power play goal per 6:11 of power play ice time.

4.  In the “you already knew this” file…no team has been shorthanded more times in overtime this season than the Caps (4, tied with Pittsburgh).  They allowed the game-winning goal each time (Islanders twice, Blue Jackets, Flyers).

5.  Here is the odd (and frustrating) thing about that previous item.  The Caps have allowed only one 4-on-4 goal this season third fewest in the league), that coming in an overtime loss to Calgary on November 4th.  They have not allowed a 4-on-4 goal in regulation this season.

Scott Hartnell missed five games after suffering a broken finger in Columbus’ 3-2 overtime win over the Caps on December 11th.  Since his return on December 27th, he has been quite productive.  In 12 games since returning to the lineup, Hartnell is 4-7-11, plus-2.  He seems to be at his agitating best, too.  In his last ten games he has accumulated 24 minutes in penalties – a ten-minute misconduct, roughing, a double minor for roughing, two slashing penalties, tripping, and high-sticking.  What he does not have this season is a point against the Capitals in two games.

Kevin Shattenkirk is the answer to a trivia question, "which NHL defenseman has more multi-point games this season than John Carlson?”  That’s right.  Carlson’s nine multi-point games is exceeded only by Shattenkirk’s ten (Mike Green also has nine multi-point games, giving the Caps the only team with two defensemen among the top dozen defensemen in multi-point games).  He is quietly – very quietly, it would seem – establishing himself as a top-shelf scoring defenseman.  Carlson is tied for fourth in scoring among defensemen (34 points, tied with Philadelphia’s Mark Streit) and is tied with Calgary’s Mark Giordano for the top spot in assists (29).  His plus-15 is tied for fifth, and his 27 even strength points are tied for second (Giordano: 29).  He is tied for ninth in takeaways and is eighth in blocked shots.  Carlson is 3-4-7, minus-2, in nine career games against Columbus.

The Capitals get few breaks in their schedule over the next month, as we noted here.  It makes it that much more important to take advantage of teams that are struggling with performance and injuries to key players.  That is what the Capitals face in Columbus on Tuesday night, and even though they have to turn around, return home, and face Pittsburgh the following night, finding the discipline to take care of business here is the most important order of business.