Washington Capitals: That Was The Week That Was - Week 10

There are two good things that can be said about Week 10 for the Washington Capitals.  First, it’s not how you start, it’s how you finish.  Second, how the Caps finished allowed them to keep the top spot in the Metropolitan Division at week’s end. 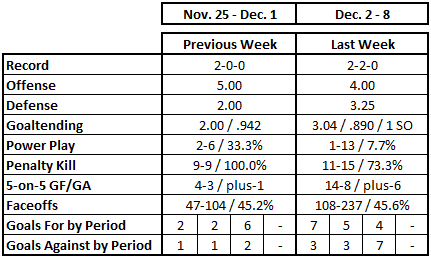 The seven-game winning streak that the Caps brought into Week 10 ended on Sunday in particularly ugly fashion.  Fourteen minutes into the second period, the Caps had a 5-1 lead on the Anaheim Ducks.  The Ducks scored in the 15th minute, the first of what would be five unanswered goals over less than 21 minutes to pin a 6-5 loss on the Caps at Capital One Arena.

Two nights later, the Caps returned to the scene of their greatest triumph in team history, T-Mobile Arena in Las Vegas, where they won Game 5 of last spring’s Stanley Cup final and the first Stanley Cup in team history.  History did not repeat itself, the Caps dropping a 5-3 decision and losing forward Tom Wilson to a concussion, the victim of an outside-the-rules hit by Ryan Reaves.

It might have made for an ugly week, but the Caps clawed out a 4-2 win in Arizona, their first win in regulation in the desert since 2006, when the Caps took a 6-1 decision, and Alex Ovechkin scored what is known simply as, “The Goal.”

Washington closed out the week in fine fashion with another win over a playoff foe vanquished last spring, a 4-0 shutout of the Columbus Blue Jackets that widened their division lead to three points through Week 10. 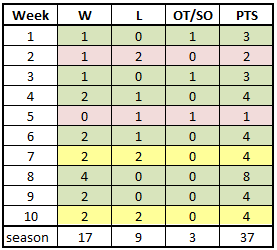 The Caps spread things around smartly in the four games.  Twelve players shared in the 16 goals scored, led by Alex Ovechkin and Jakub Vrana with three apiece.  Ovechkin’s three goals propelled him into the top spot in the goal scoring rankings through ten weeks (22).  For Vrana, though, it might have been a statement week.  He had his first two-goal game of the season in the loss to Vegas, the second multi-goal game of his career.  The three goals for the week gave him nine for the season and put him on a 25-goal pace.  All nine of his goals so far have been at even strength, second on the team to Ovechkin (15).

Sixteen different skaters recorded points for the week, and things were spread out here, too.  Three skaters finished with five points apiece in the four games – Ovechkin, Brett Connolly, and Evgeny Kuznetsov.  Connolly has been hot in a quiet sort of way lately.  He finished the week with a four-game points streak and is 2-5-7 in his last seven games.  While he is a bit behind his goal scoring pace of the past two seasons in which he finished with 15 goals, his 18 points to date put him on a pace to clear with ease his career high (27 last season).

None of the seven teams playing four games in Week 10 allowed fewer shots on goal than the Caps (110).  They allowed fewer than 30 shots in all four games, tying their longest such streak of the season, Games 16-19 in mid-November, when they allowed a total of 100 shots over four games.  The odd thing about those four games is that the Caps also had a 2-2-0 record.

It made for a good week in the underlying numbers, the Caps finishing with a shot attempts-for percentage of 53.22, although there was an odd inversion there.  Usually, that number is higher in situations in which a team is behind, owing to an increased tendency to open things up to erase a deficit.  Not so with the Caps in Week 10.  It was only in situations in which they were behind that they finished under 50 percent (47.62).

That the Caps lost their games when allowing six goals to Anaheim and five to Vegas should not be surprising.  Washington had not been a team that can outscore its defensive lapses.  Through ten weeks they are 1-7-3 when allowing four or more goals, and the lone win came in overtime (5-4 over Montreal on November 19th).

As one would expect in a week when the four games split into two losses and two wins, the goaltending followed along those lines.  Braden Holtby got the call in the first two games of the week and was not sharp.  Over the two games he was uniformly sluggish in all three periods, posting save percentages of .875 in the first periods, .895 in the second periods, and .647 in the third periods of the losses to Anaheim and Vegas.

Holtby gave way to Pheonix Copley in the third game of the week against the Arizona Coyotes, and Copley was on his game.  He turned away 27 of 29 shots, but what made the performance noteworthy in the week’s context was stopping all ten third period shots he faced (Holtby stopped on 11 of 17 third period shots over the first two games of the week).  Copley continues to impress in a backup role.  Since allowing six goals on 36 shots in his first appearance this season , a 6-0 loss to the New Jersey Devils on October 11th, he is 6-1-1, 2.57, .913, solid numbers for a goalie in his first permanent tour as a backup netminder.

The night off worked for Holtby, who returned to the net against the Columbus Blue Jackets and pitched a 28-save shutout in a 4-0 win.  It was Holtby’s second shutout of the season, his first since Opening Night against the Boston Bruins, after not recording a single shutout in last year’s regular season.  The shutout was the 34th of Holtby’s career, bringing him within one of the franchise record held by Olaf Kolzig (35).

The power play struggled mightily in Week 10, making one wonder what this week might have been had the power play even closely resembled what it was in the early part of the season.  The 1-for-13 week was the Caps’ worst performance of the season in what tied for their highest volume of power play chances for a single week (13 in Week 6).

It might have been the worst performance of the Caps’ power play over a single week in several seasons.  The 1-for-13 for the week was bad enough, but it was a well-deserved result.  The Caps managed only ten power play shots on goal in a whopping 26:18 of power play ice time.  The strangest thing about the power play, though, might be that it has been nine games since Alex Ovechkin recorded a power play goal (November 19th against Montreal).  Tom Wilson had the only power play goal of the week, that coming against Anaheim, on  what was his only power play shot on goal for the week.  It bears noticing that with T.J. Oshie and Tom Wilson out at the end of the week with injuries, two right-handed shot players in the middle of the 1-3-1 power play are not available. 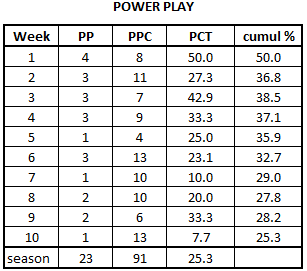 After two weeks in which the Caps killed 20 of 21 shorthanded situations (95.2 percent), the Caps reverted to earlier season form.  That is not a good thing.  But here was the week in microcosm.  The Caps were awful killing penalties in the first two games (5-for-9) but perfect in the last two games (6-for-6).

And, it was not as if the Caps didn’t get a lot of work shorthanded.  They spent 26:01 down a man for the week and allowed 24 total shots on goal, half of those to the Vegas Golden Knights in the 5-3 loss in the second game of the week.  If there was an odd result this week it is that neither the Caps nor the Arizona Coyotes registered a power play shot on goal in the Caps’ 4-2 win. 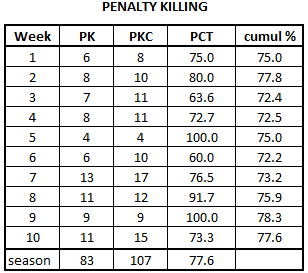 It was not a great week for the Caps in the circle, not a terrible one, either.  In other words, rather typical.  What was disappointing was being under 50 percent for the week in all three zones – 45.5 percent in the offensive zone, 48.6 percent in the defensive zone, and 43.2 percent in the neutral zone.  Onlyi the 56.5 percent effort against Anaheim (35-for-62) saved the week to any extent.

Of the four skaters to take at least ten draws for the week, only Lars Eller was at 50 percent, and that is precisely where he finished on 23-for-46.  Nicklas Backstrom and Evgeny Kuznetsov finished under 50 percent in all three zones, not necessarily a surprising result for Kuznetsov, but it was for Backstrom. 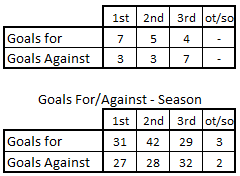 Another case of not being how you start, but how you finish.  In the first two games of the week, the Caps finished horribly, allowing a total of seven goals in the third periods of the two games while scoring only one of their own.  It was not surprising that the results were losses.  The other two games were a different story, the Caps shutting out both Arizona and Columbus in the third periods of those games while scoring three goals of their own in the two wins.  That was the difference between a mediocre week and a perfect one when one considers that over the first 40 minutes of games for the week, the Caps outscored the four opponents by an aggregate 12-6 margin. 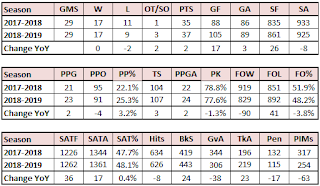 The Caps are slightly ahead of their 2017-2018 pace. Squeezing out points in extra time three times this season versus only once at this point last season.  Scoring is up more than 19 percent compared to this time last season, while scoring defense is roughly the same.  Shots taken and allowed show good movement, up in the former and down in the latter from last year.

Despite the recent struggles on the power play, the Caps are still ahead of last year’s conversion rate, but the penalty kill has slipped a bit from last year’s unimpressive level of penalty kills.

The grittership numbers are, as they have been for much of the season, a mixed bag.  Faceoffs are down, still, while the shot attempts at 5-on-5 have tilted a bit more in the Caps favor.  Hits are down, but blocked shots are up, indicating a mixed bag on possession as both are indicators with the opponent having the puck.  Penalties are down quite a bit, a good thing for a team that struggles with the penalty kill as much as the Caps do.

The glass-half-full interpretation of the week might be that the Caps made something of it after a ghastly start, blowing a four-goal lead in the second half of their game against Anaheim and unable to grab a win in the desert against Vegas.  They did beat an Arizona team that has been quite an annoyance in recent years, winning for the first time in regulation there in more than a decade.  Then, they took advantage of a singularly uninspiring effort by Columbus to keep the Blue Jackets' cannon silent.  It was not a good week, but not a bad one, either, and they remain atop the division.  That is something on which to build.