Two seasons ago, Jason Chimera scored 20 goals in a season for the first time in his career.  Last season he fell back into the valley, failing to record a goal in his first 27 games and finishing 3-11-14 in 47 games.  In 2013-2014, though, Chimera climbed the hill again, finishing with a career best 42 points off 15 goals and a career high of 27 assists.  It was the first time Chimera topped the 40-point mark in his career.

Looking at his progression through the ten-game segments, Chimera was very consistent, especially in goals, scoring 1-3 goals in each segment.  That reflected a rather consistent shooting profile as well with a ranger of 20-27 shots in six of the ten segments.  He was consistent in hits, ranging from 15-21 in nine of his ten ten-game segments.  And here is this odd consistency to his game this season.  Chimera had six goals in 38 wins and six goals in 30 regulation losses.

Just something to think about going forward.

Chimera spent 81.6 percent of his 5-on-5 ice time with Joel Ward, and it was quite productive.  Chimera was on ice for more goals-for per 20 minutes with Ward (1.025) than with any other forward with whom he skated at least 50 minutes of 5-on-5 ice time.  Next in line there was Eric Fehr, with whom Chimera was on ice for 0.837 goals per 20 minutes.  It made for perhaps the most consistently effective even-strength line the Caps had in 2013-2014. 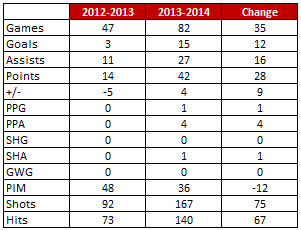 Fearless’ Take… Chimera was 6-11-17 in 26 games against the eight teams in the Eastern Conference making the playoffs.  He was 2-6-8 against the two Pennsylvania teams, always a plus.

Odd Chimera Fact… Jason Chimera was second only to Nicklas Backstrom in even strength assists.  Backstrom had 23 helpers, Chimera had 22.

Game to Remember… November 1st versus Philadelphia.  When the Capitals went to Philadelphia to open the November portion of their schedule, Jason Chimera had not recorded a three-point game for the Capitals in his three-plus seasons with the team and had not recorded a three-point game since October 2007.  By the 36:25 mark of the contest, Chimera had his first three-point game for the Caps.  He got his first point when he was credited with the secondary assist on a goal by Joel Ward just 1:24 into the second period to give the Caps a 2-0 lead.  Just 80 seconds later Chimera got one of his own when Vincent Lecavalier’s offensive zone pass attempt back to Erik Gustafsson at the blue line was deflected by Mikhail Grabovski into the neutral zone.  Chimera split Gustafsson and Kimmo Timonen to collect the puck, break in on goalie Steve Mason, and chip the puck over Mason’s glove to make it 3-0, Caps.

After the Caps made it 4-0 on a goal by Nicklas Backstrom, Chimera added his second assist on Joel Ward’s second goal of the game, starting the play by backhanding the puck off the left wing wall to Grabovski, who sent it along to Ward for a shot that found the far top corner against Mason.  Chimera was not done with just a three-point game, though.  In the sixth minute of the third period, with the Caps on a power play, Chimera got to a rebound of an Eric Fehr shot and backhanded the loose puck to Ward in the slot.  Ward banged it home, the Caps had a 7-0 win, and Jason Chimera had the first four-point game of his career.

Game to Forget… March 5th versus Philadelphia.  Another game in Philadelphia, a different result.  The Flyers jumped out to a 4-0 lead 12 minutes into the second period, but then the Caps started clawing back.  Mike Green scored a power play goal late in the second period, and the Caps got goals from Alex Ovechkin and Troy Brouwer before the third period was ten minutes old to close the gap to 4-3.  Barely two minutes after the Brouwer goal though, a pass from Jack Hillen to Eric Fehr up the left wing in the neutral zone was a hair too long.  Fehr tried to redirect the puck to Chimera, who was filling in the middle.  The puck never reached him.  Jakub Voracek stole it, headed up ice as the Caps were finishing a change, which happened to be Hillen for Karl Alzner.  Alzner didn’t get into the play on time, Chimera could not get back fast enough, and Voracek snapped the puck past goalie Braden Holtby to restore the Flyers’ two-goal lead, blunting the Caps’ momentum.  The Flyers went on to win, 6-4.

Although Chimera’s possession numbers were uninspiring, that was a problem that plagued the whole team.  Otherwise, one might make a case that this was his best season.  Between the career high in points, the way he meshed with Joel Ward and Eric Fehr on the “Green Line,” the surprising even strength assist total, finishing third in even strength goals, finishing with his highest average ice time with the Caps (15:25 a game), it was a pretty good season.

The problem, though, was one not of Chimera’s doing (or that of his linemates).  That Green Line was too often the most productive and the most consistently effective line the Caps iced.  It would be a big plus if he and that line could repeat their production next season while the top two lines show more consistency and production at even strength. But for Jason Chimera in 2013-2014, he climbed that career best hill one more time.

Posted by The Peerless at 9:33 PM No comments: