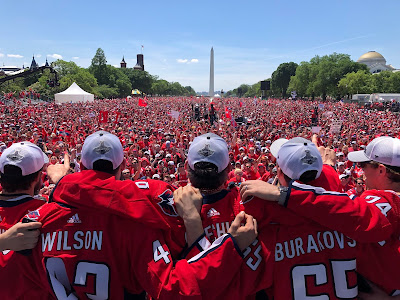 When the Washington Capitals awoke on April 26, 2018, they had escaped a tough foe in the first round of the Stanley Cup playoffs, the Columbus Blue Jackets.  But that evening they would face once more perhaps the most bitter, most frustrating rival in the 44 years of franchise history.  The Pittsburgh Penguins inflicted more pain and heartache on the Capitals and their fans than any other team.  Ten times they faced the Penguins in the playoffs, and nine times they were eliminated by them, more than by any other franchise.

The Capitals evened the series at a game apiece with a 4-1 win in Game 2 on home ice, but they would have to win at least one game in Pittsburgh to win this series.  They did it in Game 3, turning the tables on the Penguins.  Pittsburgh took a 3-2 lead into the third period, but goals by Matt Niskanen and Alex Ovechkin in the third provided the winning margin in 4-3 win.  Ovechkin’s goal at the 18:53 mark provided one of those “signs” that fans might point to as evidence that this year would be different.  Ovechkin appeared to bury a feed by Nicklas Backstrom off a 2-on-1 rush, but his shot hit the post on goalie Matt Murray’s glove side.  The puck caromed behind Murray and out the other side, giving Ovechkin an opportunity for one more swipe at it.  He did not fail, swatting the puck out of mid-air and into the back of the net for the game-winning goal.

Pittsburgh won Game 4 by a 3-1 margin to tie the series at two games apiece, reducing the fight to a best-of-three affair.  Games 5-7 have not been kind to the Caps in the first 43 years of team history, and it was with no small amount of concern about Game 5 on home ice.  That concern seemed well-founded when Pittsburgh took another 3-2 lead into the third period of this contest.  Evgeny Kuznetsov pulled the Caps even just 52 seconds into the period, setting up a tense final frame.  Where the Caps might have crumbled in the past in such situations, they did not in this game.  They came through in a manner that eluded them in the past, getting the big save when they needed it and a goal on the ensuing rush.  It was Braden Holtby stopping a point blank backhand by Brian Dumoulin at one end, and then Alex Ovechkin carrying the puck into the other end.  Just before looping around the Penguin net, he fed the puck in front where Jakub Vrana buried it from the low slot.  The Caps added empty net goals by T.J. Oshie and Lars Eller 35 seconds apart, and the Caps had a 6-3 win.

Suddenly, it was the Penguins feeling the heat, facing an elimination game on home ice, their “threepeat” as Stanley Cup champion in considerable jeopardy in Game 6.  It was a classic.  After a scoreless first period with little in the way of shots, the teams combining for only 13 in the first 20 minutes, they exchanged second period goals.  Alex Chiasson gave the Caps a lead, and Kris Letang tied the game mid-way through the period.  When neither club could solve the other goaltender in the third, it went to overtime.

Hockey is a different animal from other team sports in many respects, but how overtime ends might be the most unique aspect of the sport.  In football, you can generally see things coming as a team drives down the field for what would be the game-winning field goal or touchdown.  Even in baseball, most walk-off decisions are the product of putting runners on base to drive in with a base hit.  In basketball, there is a clock that must run its course.  But in hockey, overtime often ends with a thunderclap, unexpected and loud.   It almost did for the Caps in overtime in this game when Tom Kuhnhackl hit the post with a shot that ricocheted out instead of in.  Later, overtime ended, not in a thunderclap, but on a play that took seconds that seemed like hours, a play that had its own sense of building anticipation, of Caps fans wondering “is this finally it?!”…


Having slayed their most bitter rival, the Caps were merely half way to a championship.  And, it would not be their last difficult test.  The Tampa Bay Lightning were the top team in the Eastern Conference in the regular season, finishing eight points ahead of the third-place Caps and winners of two of the three games in their season series.

The Caps faced the Lightning twice in the postseason in the past, losing a six-game series in 2003 and being swept by Tampa Bay in 2011.  The first two games called up memories of that first meeting, in 2003. That was one in which the Caps won Game 1 and 2 in Tampa.  The Caps did just that in May, beating the Lightning by 4-2 and 6-2 margins.  With two dominating wins and returning to home ice, the thought of “sweep” might have entered more than a few heads.

That notion was crushed when the Lightning called up their own memories of 2003, taking Games 3 and 4 at Capital One Arena by identical 4-2 scores.  When Tampa Bay won Game 5 at Amalie Arena, 3-2, in Game 5, that 2003 series seemed to be playing out as a video replay.

Game 6 in 2003 went to three overtimes before the Capitals succumbed to the Lightning on a power play goal.  This time, Washington never let the Lightning get close enough to fashion a similar ending.  There was no scoring in the first period, but T.J. Oshie got the Caps on top with a power play goal late in the second period.  Devante Smith Pelly, who displayed an uncanny sense of timing for critical goals in this postseason, provided insurance with a goal ten minutes into the third period.  Oshie hammered the last nail into the coffin with an empty net goal in the last minute.  But it was Braden Holtby who shined brightest and stood tallest in this game, staving off elimination with a 24-save shutout to set up a winner-take-all in Tampa in Game 7 for a trip to the final.

Alex Ovechkin opened the scoring in Game 7 just 62 seconds into the contest, and the Caps never looked back.  Andre Burakovsky scored goals seven minutes apart in the second period, and Nicklas Backstrom added a fourth goal into an empty net with 3:43 left.  At the other end, Holtby was once more magnificent, stopping all 29 shots he faced.  In posting a second consecutive shutout in an elimination game, he became the first goaltender to do so without posting one in the regular season since Earl Robertson did it in 1937 for the Detroit Red Wings (Robertson not only did not post a shutout in the regular season, he did not appear in a regular season game).

For the first time in 20 years, the Capitals would skate for the Stanley Cup in the final.  Their opponent – the Vegas Golden Knights – were an expansion team in fact, but hardly one in performance.  They won 51 games in the regular season and carried a record of 12-3 in the playoffs into the final.  It was a club that did it by using speed, forechecking pressure, depth, and balance over the course of the season.  All were on display in Game 1 in which the Golden Knights broke on top with a 6-4 win.  The five goals allowed by Holtby (Vegas added an empty-netter) were the most he ever allowed in a road playoff game and only the second time in 78 postseason games played that he allowed as many.

That, however, would constitute the beginning and the end of the fun for hockey’s darlings.  Vegas managed only eight goals in total over the next four games, all Caps wins, while the Caps were making Marc-Andre Fleury look something less than his otherworldly self that he displayed in the first three rounds (12-3, 1.68, .947, four shutouts).  The Caps did it in a “team” way.

And it goes on and on.  One could look at every name on the roster and come up with a statistic or an anecdote describing their contribution to this, the most successful team in Washington Capitals history.

And so it was.  In 43 days, the Caps defeated their most bitter rival and the top club in the Eastern Conference to reach the Stanley Cup final.  There, they faced a club, their “expansion club” status aside, that swept a club that won two Cups in the previous six seasons, beat a team that was a Stanley Cup finalist two years ago (and that they shut out in the first and last wins of that series), and beat in five games a team with the second-best record in the Western Conference.  It was not an easy road to winning the Cup.

But there they were, and on the 44th day of that difficult road, in their 44th year in the NHL, they awoke Stanley Cup Champions.
Posted by The Peerless at 8:19 AM No comments: