The Peerless Prognosticator is ON THE AIR!!! -- Game 28: Capitals at Coyotes, December 6th

The Washington Capitals continue their road trek on Thursday night when they visit the Arizona Coyotes at Gila River Arena in Glendale, Arizona.  The Caps go into this contest having lost their last two games, their first instance of consecutive losses since they lost to the Columbus Blue Jackets and these Coyotes in Games 15 and 16 in November.

Since Arizona inflicted that second straight loss on the Caps, a 4-1 win at Capital One Arena on Veterans Day, they are 5-4-1, but just 2-3-1 on home ice.  The Coyotes have had a tough time scoring over that ten-game stretch with only 23 goals scored.  The silver lining there is that they have spread the scoring around, 11 skaters sharing the 23 goals.  Clayton Keller and Lawson Crouse share the lead in that department with three goals apiece over the last ten games.

Keller, taken by the Coyotes with the seventh overall pick in the 2016 entry draft, the young center is putting together a sophomore season that looks a lot like his rookie season last year.  With almost a third of the Coyotes’ schedule complete, Keller has eight goals, just over a third of the way to his 23 goals recorded last season.

The difference is in scoring at strength.  Last season, Keller scored six goals on power plays, while this season he has yet to hit the back of the net on a man advantage.  The odd part of it is that Keller is averaging more ice time per game on power plays (3:43) than he did last season (3:01).  On the other hand, he is averaging fewer shots per game on power plays so far this season (0.46 per game) than he did last year (0.77).  He does have seven power play assists, though, a number half way to the 14 he posted last season.  Keller is 2-2-4, plus-3, in three career games against Washington.

Crouse is another youngster taken high in the draft, but one following a different path than Keller.  Taken with the 11th overall pick in the 2015 entry draft by the Florida Panthers, the left winger was traded barely a year later with Dave Bolland to the Coyotes for a third round pick in the 2017 draft and a second round pick in the 2018 draft.  He dressed for 72 games in 2016-2017, posting five goals and 12 points.  He followed that up, however, with a season of only 11 games with one goal, his only point recorded last season.

Crouse did record 15 goals and 32 points for the AHL Tucson Roadrunners last year, perhaps a necessary developmental step.  He started slowly this season with only two goals in his first 15 games, but he does have those three in his last ten contests.  Crouse has two games this season in which he logged 12 or more penalty minutes.  Only Brad Marchand and Antoine Roussel have more (three apiece).  One of those instances happened to involve a fracas with Roussel in a 4-1 win over Vancouver on October 25th, earning a roughing and misconduct penalty, while Roussel was hit with a double-roughing minor and a misconduct.  Crouse is 0-1-1, even, in two career games against the Caps.

Goaltending has been a revolving door since the Coyotes face the Caps last month.  Four goalies have appeared in those games – Antti Raanta, Darcy Kuemper, Hunter Miska, and Adin Hill.  All but Miska started at least one game in that stretch.  Hill has started each of the last three games for the Coyotes and has been quite efficient, stopping 79 of 81 shots (.975 save percentage).  He has only five NHL games under his belt this season, all of them since November 25th, and what a start he has had.

Hill’s first two appearances were in relief of Raanta.  He stopped the only shot he faced in a 6-1 loss to the Calgary Flames, but after replacing Raanta after two periods with the Coyotes down, 3-1, against the Minnesota Wild, he stopped all five third period shots he faced while the Coyotes came back with three goals to give Hill his first win of the season.  He followed up that appearance with a 29-save shutout of the Nashville Predators in Nashville, giving him 35 saves on the first 35 shots he faced in 2018-2019.  He extended his shutout streak to 41 shots and 117:23 before allowing his first goal of the season, 1:26 into the second period of the Coyotes’ 6-1 win over the St. Louis Blues last Saturday.  In five appearances covering 215:46 of ice time to date, Hill has stopped 85 of 87 shots.  “Hot” does not describe his start adequately.  If he gets the call, it will be his first appearance against the Caps. 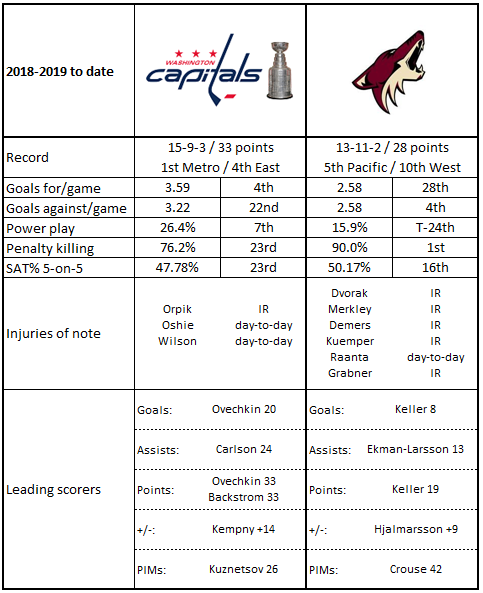 2.  Arizona really does spread the scoring around.  Through 26 games, 19 skaters have at least one goal, but none with more than eight (Keller).  Nine skaters have game-winning goals, Keller the only one with more than one (four).  However, Michael Grabner has the only overtime game-winner for the Coyotes.  He is out indefinitely with an eye injury.

3.  Arizona is the only team left in the league without a major penalty charged.  Only two of their 104 penalties taken were not minors (including bench minors); two misconducts on their ledger.

4.  The Coyotes do a good job of protecting the puck, or they get generous scoring.  Only three teams have been charged with fewer giveaways than Arizona (199) – Colorado (189), Minnesota (157), and St. Louis (156).  Not that they are especially adept at takeaways; they have the fifth-fewest in the league (149).

1.  The Caps have allowed nine goals in the third period of the last three games, and the trend is worse – two goals allowed to the New Jersey Devils, three allowed to the Anaheim Ducks, and four in their last contest against the Vegas Golden Knights.

2.  Winning faceoffs at even strength is not the Caps’ thing.  They rank next to last in even strength faceoffs won (612).  Only the New York Islanders have fewer wins (576).

3.  No team in the Eastern Conference has been shorthanded more often than the Capitals.  They are tied with the Tampa Bay Lightning with 101 shorthanded situations faced through Tuesday’s games.  In the entire league, only Vancouver has allowed more power play goals (28) than the Caps (24, tied with Ottawa).

4.  Having lost their last two games while taking a lead into the third period, the Caps are now tied with Winnipeg for most losses in regulation when leading after two periods this season (three).  On the other hand, the Caps have 12 wins when leading after two periods, fifth-most in the league.  The 15 leads they have taken into the third periods of games is third-most in the league, behind only Nashville (16) and Tampa Bay (17).

5.  Seven defensemen have dressed for ten or more games for the Caps this season.  All of them have points, and five of them have goals (Madison Bowey and Christian Djoos being the exceptions).

Nick Schmaltz was a 20th-overall draft pick of the Chicago Blackhawks in 2014.  After spending two years with the University of North Dakota after being drafted, he moved up to his first professional assignment, splitting time between the Rockford Ice Hogs in the AHL and the Blackhawks, for whom he played 61 games in his 2016-2017 rookie season.  Schmaltz had decent numbers as a rookie (6-22-28, plus-10) and followed that up with an even better sophomore season (21-31-52, plus-1, in 78 games).  However, the Blackhawks stumbled out of the gate this season, and Schmaltz was not contributing enough to arrest that slide.  Combine that with the Blackhawks’ propensity for trading former first round picks, and Schmaltz was a candidate for relocation.

Schmaltz was traded to the Coyotes for forwards Dylan Strome and Brendan Perlini on November 25th.  He seems to like his new home.  After being held without a point in his debut with the Coyotes on November 27th against Minnesota, he has points in each of his last three games (2-3-5), two of those being multi-point games.  His five points represent having a piece of almost half the goals scored by Arizona in that span (11).  In four games with the Coyotes, Schmaltz is almost half way to the total points he had in 23 games with the Blackhawks this season (11) before his trade to Arizona.  In four career games against Washington, he is 1-1-2, minus-1.

The evolution of an NHL defenseman might be slower than that for any other position.  While forwards can have a considerable impact on outcomes early in their careers, defensemen simply have too many things to develop – positioning, skating, stick management, when to step up, when to sit back, spacing, -- and that is before getting to the offensive end of the ice.  Madison Bowey has not yet made a lot of progress in the offensive end of the ice, but he is learning the ways, skills, and techniques he needs in the defensive end of the ice.  While he does get third pair minutes, averaging a bit more than 13 minutes per game, only three times in 19 games has he finished as a “minus” player, and only once in a loss.  Bowey is still looking for that first NHL after 70 games this year and last, but he has points in five of his last 11 games after going without one in his first eight games this season.  He is also getting more shots to the net, recording 12 shots on goal in those 11 games after posting just five shots on goal in his first eight games this season.  In two career games against Arizona, Bowey has one assist.

The trick to managing a schedule is to avoid the long losing streaks.  The Caps have lost consecutive games in regulation for the third time this season.  There has not yet been a three-game losing streak of any kind.  The Coyotes, however, are an ornery bunch when playing the Caps.  Washington has never won three straight games against this franchise dating all the way back to January 1984, when they were the original Winnipeg Jets.  The Caps have lost six of their last seven meetings in Arizona (1-4-2), including the last three games played there (0-2-1).  Washington has not won a game in regulation in Arizona since a 6-1 win in January 2016.  Caps fans remember that game for something else that was “simply sensational”…


The Caps’ frustration, both over the last two games in which they coughed up leads late and in their visits to Arizona, makes this contest quite a chore for a club still dealing with absences of Brooks Orpik and T.J. Oshie, and perhaps now without Tom Wilson, injured in Tuesday’s game against the Vegas Golden Knights.  Dig deep and pull up a win.