The Peerless Prognosticator is ON THE AIR!!! -- Caps vs. Hurricanes, March 21st

It’s the last visit of the season – the regular season – to Carolina as the Capitals take on the Carolina Hurricanes. The Capitals blow into town like a cyclone…

“Hurricanes are no laughing matter, sir."

“Foone…Dr. Ty Foone, of the National Hurricane Center, and we’d appreciate your not making light of these deadly storms.”

“Very funny, sir, but hurricanes are not to be trifled with.”

And you don’t want to have your weather system “Staal” over Raleigh tonight.

“haha…I get it. Meteorology joke.”

And then there is the matter of the “Cole” front that moved into Carolina around the trading deadline.

But it’s not in Carolina, where the Hurricanes are, in fact, 6-1-2 in March and 1-0-1 against the Caps for the month. That 14-point month so far has catapulted the ‘Canes into sixth place in the Eastern Conference, and to abuse the hypothetical you hear at this time of year, if the playoffs were to start today, the Caps and ‘Canes would be the first round matchup. And speaking of matchups, here are the number matchups... 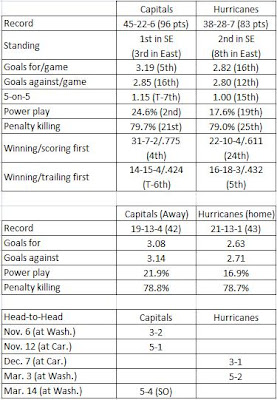 In March, Carolina has outscored its opponents by 40-21 in nine games. Four of their six wins have been by at least three goals, including a 5-2 win over Washington in the first game of the month. They’ll be bringing a two-game winning streak into tonight’s game, a 4-2 win over Martin-Brodeur-less New Jersey on Wednesday and a 5-4 win over the Islanders last night.

Special teams have been key for the Hurricanes in two respects. First, the power play is 13-for-44 this month (29.6 percent). It’s a good thing, too, since the penalty killers are only 28-for-36 (77.8 percent). And in those numbers are the second key – the Hurricanes have enjoyed eight more power plays than they have suffered shorthanded situations. They have had more power play opportunities than their opponents in six of the nine games they’ve played this month, going 5-1-0 in such games. Given the Caps’ tendencies to wear a path to the penalty box on nights they’re not fully engaged, this bears watching.

Individually, Erik Cole has now played eight games for the Hurricanes since returning to Carolina from Edmonton. That the Hurricanes are 5-1-2 and Cole 2-8-10, +4, is probably not a coincidence. And he’s had salutary effects on the play of Eric Staal, who is 6-8-14, +9 in the eight games since Cole returned to the scene. Combined, the “Erick’s” have played 69 career games against the Caps, their production being 33-32-65, +4, with nine power play goals, a shorthanded goal, and three game-winners.

On defense, the Hurricanes have gotten contributions from an unexpected place. Anton Babchuk has seven goals in his last 15 games, including the game-winner against the Devils last Wednesday. Perhaps more important, the goal scoring hasn’t come at the expense of defense (or at least his ability to be on the ice when good things happen). He is plus-12 in those 15 games. As a group, it has been solid. In 45 man games played by the top six defensemen this month, there are only six minus games in the bunch.

While the Caps are pondering the “Erick’s,” Whitney, Brind’Amour, etc., consider Patrick Eaves. In 63 games against the rest of the league this year, he is 3-7-10, +6. Not exactly fear-inspiring. But in four games against the Caps he is 2-1-3, +2, doubling his production from previous years against the Caps to 4-2-6, +4 in 14 games. He could be an under the radar guy that could burn a team not paying attention.

The one kind of line you don’t like to see from Semin is this…0-0-0, even, three shots…and four PIMs. It’s not so much the points as the penalties, both for hooking in the first period against Tampa Bay in the Caps’ last contest. It suggests maybe a bit of a wandering focus, and taking the iffy penalty against the Hurricanes lately is playing with fire. Semin has really abused Carolina defenses – 19-15-34, +6, with eight power play goals and four game-winners in 23 career games. He is a mind-boggling 6-7-13, +3, with two game-winners in four games against Carolina this year. Which Semin shows up will probably be the key for the Caps.

Carolina hasn’t lost a home game in more than a month, winning seven in a row since taking a 5-1 loss at the hand of the Bruins. They are firing – quite literally – on all cylinders. If the Caps defense and goaltending needed a test, they are going to get one in this game. As the Caps end the regular season series against the Hurricanes, they catch Carolina in the midst of perhaps their hottest stretch this season. And heat feeds Hurricanes. The Caps have enough to weather the storm…

Posted by The Peerless at 9:56 AM No comments: