Someone else stittin' at the end of the bar...

“Hey cuz, how does Peerless start these things?”

No he’s not, you idiot. He’s still in hiatus.

“Oh yeah…right. But where is hiatus, anyway? Isn’t that in Massachusetts?"

No, that’s “Hyannis.” Shouldn’t you be getting to the point?

-- Last year the Caps had a plus-eight differential in goals scored to goals allowed through 14 games (no, that doesn’t include shootouts, cuz). This year, plus-12.

-- Compare goals allowed last year to this, and it’s a 21 percent improvement, down from 43 goals to 34 allowed.

-- I keep hearin’ that whole “puck possession” thing gettin’ talked about. Well, here is somethin’ I found interestin’ on that score. The Caps have six players who have played in all 14 games and have a takeaway-to-giveaway ratio better than 1.00. Here is that list: Mike Knuble, Nicklas Backstrom, Alexander Semin, Tomas Fleischmann, Brooks Laich, and Alex Ovechkin.

-- As a team, the skaters are only a minus-3 in giveaways to takeaways.

-- You’d expect David Steckel to be among the leaders in faceoffs (he’s eighth overall). But bet you wouldn’ o’ had Nicklas Backstrom in the top 30 and ahead of guys like Eric Belanger, John Madden, Mike Modano, and Saku Koivu…or is that Mikko Koivu (cuz, it’s both of them, actually).

-- Am I reading this right? Tomas Fleischmann has been on the ice for one goal against so far in 14 games?

-- Alex Ovechkin leads all NHL forwards in average time on ice per shift (1:04), but right behind him are Evgeni Malkin (1:03) and Sidney Crosby (59.0). In fact, while the Caps have two of the top 14 forwards in average shift time (Nicklas Backstrom being the other one), Pittsburgh has four of the top 11 (Chris Kunitz and Mike Comrie being the others).

-- The Caps are second in the NHL in goals scored per game, but they have only one player in the top-60 in shooting percentage (Alexander Semin, 34th at 18.8 percent). And no, we’re not counting Matt Bradley’s 1-for-5 shooting.

Not bad, but cuz?

... either order the dog a beer or take him outside. 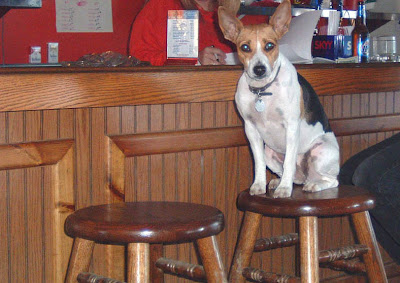