"I don't think anyone came in rejoicing.  It's nice to know we're not gonna finish lower than third [in the conference], but other than that, we have bigger goals."

-- Brooks Laich, on clinching the division

But don't forget how far the Caps have come, either.
Posted by The Peerless at 3:28 PM 1 comment:

Over at CSNWashington.com, Michelle Scalise has a nice interview with Capitals defenseman John Carlson.  It got us to thinking, we have the cousins -- Fearless and Cheerless -- visit us from time to time to get their, uh... unique take on the Caps.  But no one knows much about them.  So we thought we'd borrow a few questions to give folks a glimpse into the lives of the cousins.  It might go something like this...

The Peerless Prognosticator: What was your best hockey memory?

Fearless: “I can remember it as if it was yesterday… it was a bright winter morning, and we tykes were out on the pond playing a rousing game of shinny. I hadn’t played a lot of hockey at that age, but there I was, winding my way along the ice, stick handling here, stick handling there, and just enjoying the moment.”

TPP: How old were you when you first started playing hockey?

Fearless: "I think I was born with skates on. It’s just a God-given talent. I can’t remember a time when I didn’t skate, but think I might have been three or four when I started playing hockey."

TPP: How about you, Cheerless?

Cheerless: “Oh, not 'til I growed up some. When Fearless was born with skates on, he tore Momma up bad, and she wasn’t going to have any of that no more.”

TPP: If you weren’t playing hockey, what would you be doing?

Fearless:  "I would be studying art in Milan… or maybe architecture in Florence. Definitely something artistic, to give voice to the human experience."

Fearless: "Sushi... There is nothing that melds sight and taste like expertly prepared sushi."

Cheerless: "Me, too… barbecued."

Fearless: “'The Seven Samurai' – I so love Kirosawa."

TPP: What’s the last song you sang out loud to?

TPP: What’s your favorite place to hang out?

Fearless: “I like to spend the day browsing through the art museums on the Mall.”

Cheerless: “Uh, over my belt?”

TPP: You guys are doing pretty well, what with being frequent guests on a famous hockey blog and all... Have you made a big splurge yet?

Fearless: “What blog is that?"

Fearless:  "Well, I have to admit a weakness for antique hockey equipment.”

TPP: How about you Cheerless, have you made a big splurge, yet?

Cheerless: “No, but I usually have a big one right after I eat breakfast.”
Posted by The Peerless at 12:37 PM 1 comment:

The Peerless Prognosticator is ON THE AIR!!! -- Caps vs. Lightning, March 12th

Didn’t we just do this? The Tampa Bay Lightning come back to Verizon Center tonight to close the home stand that they opened for the Caps eight days ago. It has been a successful stand so far for the Caps, who take a 3-0-1 record into the last game of the set. In the four games they outscored their opponents 14-10. If there has been a blot on the record in the last week is it in special teams. Sure, the Caps are 4-14 on the power play in this home stand (28.6%), but they have killed off only nine of 14 shorthanded situations (64.3%).

OK, Cheerless, what would you call them.

"I’m afraid we’re stuck with him…"

As for the game, the Lightning come into this game with the same sort of disarray we described in the prognosto eight days ago. Going 1-1-1 since then isn’t going to give the Lightning much of the jolt they need to climb in the standings. Neither is coming into Verizon Center to visit the Caps in the back half of a back-to-back. The Lightning lost to the Leafs last night in overtime, 4-3. That is not especially good news for the Lightning. Tampa Bay split their first seven back-to-back series this season (going 7-6-1 in the process), but lost both ends of their last back-to-back – at the Islanders (5-4 on February 13th) and at the Rangers (5-2 on Valentine’s Day).

We’ll refer you to the prognosto eight days ago for some of the details about the Lightning. The overall numbers look like this... 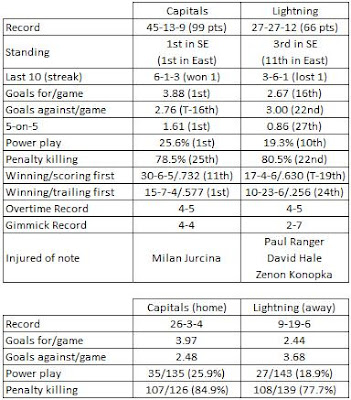 They really haven’t changed in the three games since, especially in one important respect. Steven Stamkos has been tearing up the league. In three games since the Caps and Lightning tangled, Stamkos is 4-3-7. And his running mate – Martin St. Louis – has been right there feeding him. The diminutive one is 2-4-6 in those same three games. One thing that will change is that with Mike Smith having played last night, not to mention he is 0-3, 3.80, .883 against the Caps this season, Antero Niittymaki should get the call in goal for the Lightning.

But what about the Caps? The home team has jumped out of the blocks after the Olympic break, going 4-0-1. This after closing the pre-Olympic portion of the season 17-2-2 after losing to the Los Angeles Kings in the first game of 2010. 21-2-3 is, as they say, “not bad.” What distinguishes the five games since the Olympics is that the Caps have given some encouraging signs that they are clamping down in their own end of the ice. In five games they allowed 11 goals, including a shutout against the Rangers. The flip side of that, though, is that of the 11 goals they allowed in the five games, five of them came on the power play. You could say that outscoring opponents 13-6 at even strength is a good thing (and it is). But getting outscored on the power play 5-4 remains a problem, and it is, in our opinion, the team’s Achilles’ heel, more so than simply saying they have iffy goaltending or less-than-top-shelf defensemen.

In these last five games the Caps have had the benefit of scoring balance. Eleven players share in the 17 goals, and 19 skaters have points.

Mike Green leads the team in scoring in the post-Olympic portion of the season at 3-3-6 in five games. Green continues to lead the league’s defensemen in goals, assists, points, power play goals, power play assists, and power play points, while holding down the second spot in plus-minus (behind teammate Jeff Schultz).

Speaking of Schultz, he had the second consecutive “minus” game for only the second time this year when he went minus-1 against Carolina. He has had only ten “minus” games this season. We’ll say it again – we don’t care if he does it by hitting guys, angling guys off the puck or singing sweet lullabies in their ears, but if more good things happen when he’s on the ice than bad things, we’ll take it. Schultz is very much this generation’s Joe Reekie. He doesn’t look great doing it, perhaps (Reekie’s skating was once famously described by goalie Olaf Kolzig as “painful” to watch), but the job gets done at the end of the day.

What might be surprising in these last five games is the comparative silence of Alex Ovechkin. He is second on the team in scoring over this stretch (2-3-5), but except for a pair of goals against the Stars in a 4-3 Gimmick loss, he has been (for him) quiet. Four points in the last two games suggests that, like the warning signs before the Mt. St. Helens eruption, he is about to break out. Given that he is 23-24-47 in 34 career games against the Lightning (including 3-4-7 in four games this year), tonight might be that night.

Malone missed a game with an undisclosed upper body injury, but he returned to the ice against Toronto last night, playing ten minutes without a point. Stamkos and St. Louis have been shouldering the scoring load lately for the Lightning, with mixed results in wins and losses. The Lightning need to get secondary scoring support, and that points right to players like Malone. Despite dealing with the bumps and bruises that come with this time of year, Malone will have to be an important cog down the stretch if the Lightning are to climb a few notches in the standings. The problem is that Malone has gone 15 games without a goal and doesn’t have one in four games against the Caps this season.

OK, kid… you’re up. Varlamov appears likely to get the call, since Jose Theodore was in net against Carolina on Wednesday. Varlamov is 1-0-1 since the break, but he hasn’t looked sharp in doing it, allowing seven goals on 55 shots (.873 save percentage). Five of those seven goals were allowed in the third period (on 21 shots, a .762 save percentage). Varlamov needs to show he can be good for 60, not just for 40 minutes, or else Stamkos will eat him up (he had a third period goal against Varlamov eight days ago), and he’ll be seeing less and less action down the stretch.

1. Big Guns, be Top Guns. Nicklas Backstrom, Alex Ovechkin, and Mike Knuble have four of the 17 goals the Caps have scored (23.5 percent) in the five games since the break. By way of comparison, they scored 33 of the 67 goals the Caps had on their 14-game winning streak (49.3 percent). Somewhere in between would be good (edit: Knuble appears to be a scratch for this game, so Alex?...Nick?...do your stuff).

2. Finish strong. This applies more to defense and goaltending than offense. In the five games since the break, the Caps have allowed only two first period goals. But they have allowed four in the second period and five in the third. Letting teams back into the game isn’t part of the game plan.

3. Number 9…Number 9… Brendan Morrison scored the game-winning goal in the last game before Christmas in a 5-2 win over Buffalo. He has one goal since, against the Islanders on January 26th. He is 1-10-11, plus-3 over his last 29 games. He is 0-2-2 in four games against the Lightning this year.

In the end… well, in the end the Caps are just better.