The Peerless Prognosticator is ON THE AIR!!! -- Game 24: Penguins at Capitals, December 1st

The Washington Capitals take the ice for the middle game of this week's three-game home stand, hosting the Pittsburgh Penguins this evening at Verizon Center. As the NHL headed into Wednesday night action, the Penguins led the NHL in points; had the greatest single talent in the history of the league not born in Brantford, Ontario, or Montreal, Quebec; scored with aplomb; checked with enthusiasm; defended with honor; and upheld the virtues of truth, justice, and the NHL way.

In other words, we Caps fans despise them.

Nevertheless, the Penguins come to town just about where we came in last year when they made their first visit to D.C. You remember, don’t you Caps fans? One team was riding high, coming to town on a 16-2-1 run and feeling all fat and happy with the HBO cameras recording every sappy, sugary, saccharine moment of boys throwing snowballs at one another, boys playing video games against one another, boys playing pranks on one another, and oh yeah…boys winning a crap load of hockey games.

The other team was surly, sullen, and sad, mired as they were in a losing streak that ended just a couple of games before the Sunshine Boys came to town. All you ever saw of Caps were guys on training tables getting treated for this or that injury, a coach in a locker room making creative use of a verb/noun/adjective generally associated with fornication, and oh yeah…a crap load of losses.

Well, here we are. Pittsburgh is 11-5-2 after a shaky 3-2-2 start, leading the league in points, and their fresh-faced star back on the ice and tearing things up. Washington is 5-10-1 after a 7-0-0 start, can’t stop a puck if they nailed the goal shut, can’t score if they were in a brothel waving hundred-dollar bills, and their coach has been fired.

And if you’re thinking that the new coach is going to bring his years of success in battling the Penguins to bear on this game, well…good luck with that. In his 12 seasons in Washington, Dale Hunter’s Caps teams compiled a regular season record of 23-37-6 against the Penguins. We won’t get into that whole playoff thing. That’s a tale for another day. Here is how the two teams stack up against one another: 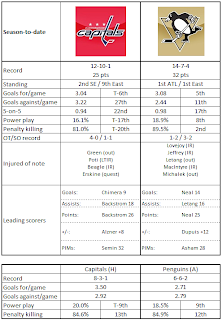 (click pic for larger image)
Let’s be frank…if the Penguins don’t score ten, there will be an investigation.

2. That is, when they are not killing them off. It is not that they spend so much time doing it (15th in total shorthanded time) or face that many situations having to do it (tied for 14th in total shorthanded situations). It is that they are so adept at it. They have allowed only nine power play goals this season (only New Jersey and Phoenix have allowed fewer), and they are third in overall penalty killing efficiency (89.5 percent). But there are two things to watch for here. First, the Penguins are not nearly as efficient on the road (84.9 percent) as they are at home (97.0 percent) in penalty killing. Second, the Penguins have allowed two power play goals in a game three times this season – all on the road, all in losses. On the other hand, the Caps have scored two power play goals in a game twice this season and won them both. Trouble is, they have not done it in more than a month (against Detroit on October 22nd).

3. If there is a weak underbelly on this team, so far it has been the defensive pair of Zbynek Michalek and Paul Martin. Of the 61 goals allowed by Pittsburgh through 25 games, Martin has been on the ice for a whopping 30 of them (yes, Roman Hamrlik has been on ice for 31 goals against the Caps). Michalek has been on ice for only 15 goals against, but then again, he has appeared in only 14 games, too (his is a 27 goals-against pace through 25 games). He is expected to be out for this one, so it is all up to Paul Martin to be the guy with the best seat in the house to see the Caps score.

4. If it is possible for Evgeny Malkin to be “quiet” in his performance, he is quietly producing at a 38-58-96 point pace. Despite missing seven games, Malkin is second on the team in scoring, and what is worse for Caps fans, is 4-5-9 in his last five games. He is 7-19-26 in 17 career games against Washington.

5. Last season Pittsburgh was tied for second in the league in fighting majors with Boston – 71 in 82 games (trailing only St. Louis). So far this season they have 10 in 25 games, a 33-fight pace. Twenty Penguins shared in that 71-fight total from last season, Derek Engelland leading with 13. So far, only five Penguins have dropped the mitts, and Engelland has only three (second on the team to Arron Asham’s four). Here is the thing, though. In eight games in which the Penguins have had at least one fighting major, they are 2-3-3.

1. In 25 career regular season games against the Penguins, Alex Ovechkin is 19-14-33, plus 15. He is 9-5-14 on the power play alone. He has a shorthanded goal against the Penguins (one of four in his career). He scored a goal in his only appearance so far this season against Pittsburgh. He has points in four of his last five games. But there is this…he is 1-for-32 in shooting (3.1 percent) in his last nine games.

2. Speaking of “soft underbelly,” if you look at those 74 goals allowed by the Caps so far in 23 games, you will find that Roman Hamrlik (31) and Dennis Wideman (29) are right up there among defensemen on ice for goals against. But then you have John Carlson (23), Karl Alzner (20) and Jeff Schultz (19). The Caps are spreading it around pretty well, and not in a good way.

3. In 24 career games against Pittsburgh, Tomas Vokoun has faced an average – an average – of 37 shots on goal per 60 minutes. That is seven more per 60 minutes than the Caps have allowed so far this season. If the Caps can hold that shot total down, and Vokoun is in goal, his .924 career save percentage against the Penguins could bear dividends.

4. Mike Green has three power play goals this season. He also has played a total of 7:44 in the Caps’ last 16 games. The three power play goals are significant because the rest of the defense combined has three. Dennis Wideman has only one of them. You might remember it – it was the game-winner in the first meeting of these two teams, a 3-2 overtime win on October 13th.

Jeff Halpern did not have a good time of it, even for a fourth liner, in November. Since recording points in his first two games of the month, he is without a point in his last 11 games, and he is a minus-6 over that span. But the Penguins might be the tonic to cure those ills. In 37 career games against Pittsburgh, Halpern is 11-10-21, plus-11. Three of his goals were game-winners.

1. Possession. Pittsburgh is third in the league in shots on goal, and only one team (Detroit) has more wins when outshooting the opposition. The Caps were outshot by a 41-19 margin in the first meeting between these teams on October 13, and it took goalie Tomas Vokoun playing perhaps his best game thus far in a Caps jersey (stopping 19 of 20 shots in the third period and overtime) and an overtime power play goal to come out with a win. The Penguins were held to fewer than 30 shots only once in November.

3. Hospitality. Don’t be good hosts. The Penguins are a rather ordinary road team. Among the playoff eligbles in the East, only Ottawa has a worse road record than the Penguins’ 6-6-2, and they are tied for 23rd in goals allowed on the road.

In the end, the run up to this game is like a bad movie rerun. Pens are up, Caps are down. But hey, it’s December. If this is the story line in April, there would be more cause for concern. At the moment, it is more annoyance than crisis (although for Caps fans, pretty much anything is a “crisis”). Nevertheless, the Caps have found a way against this team. Since dropping Game 7 of the second round of the 2009 playoffs, the Caps are 8-0-1 against the Penguins and have outscored them, 33-18. We’re thinking that the Caps will find a way to continue that trend and make Dale Hunter’s first win as an NHL coach a memorable one.

Hey, we got through a whole Pens/Caps issue without mention of Sidn...