Dmitry Orlov’s development as an NHL defenseman has not been linear.  Taken in the third round of the 2009 entry draft, 55th overall (between Eric Gelinas and Kevin Lynch, both of whom spent their 2017-2018 seasons in the AHL), he worked his way up from the KHL to the AHL and finally to the Caps in 2011-2012.  He had a solid rookie season (3-16-19 in 60 games), but then he lost momentum in his development when injuries limited him to just 59 games with the Caps over the next three seasons, the last of which he missed in its entirety.

His tens started slowly – just 1-2-3, minus-3, in his first two segments – but he raised his production in the third ten-game segment (1-6-7, plus-5) and maintained it thereafter, going 8-17-25, plus-15 in segments 3-7 before slumping a bit at the end (1-2-3, minus-2, in his last segment).  Those tens displayed a rather odd consistency in his shooting.  He averaged 14.7 shots per segment over his last six segments, and they was somewhat tightly wrapped around that average, ranging from 12 to 18 shots. 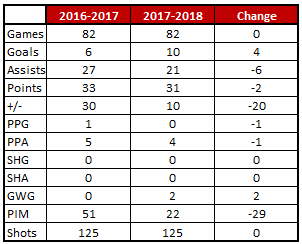 Fearless’ Take… Dmitry Orlov will turn 26 years old later this month, but he is already staking a claim as being one of the better defensemen in team history, numbers-wise.  He is one of 11 defensemen in franchise history to appear in at least 350 games, record at least 25 goals, and post at least 100 points (30-94-124 in 365 games).  Adding in his career plus-53, and he is one of just eight defensemen to add a plus-50 or better to the three other marks.

Odd Orlov Fact… Dmitry Orlov was the only Capitals defenseman among the ten who dressed for at least one game this season to have a takeaway-to-giveaway ratio of better than 1:1 (1.06:1 on 54 takeaways and 51 giveaways).

Dmitry Orlov has shown from time to time a certain offensive flair.  When he had a goal and an assist against the Pittsburgh Penguins in a 7-4 loss on February 2nd, it was his tenth multi-point game as a Capital, becoming just the 13th defenseman in team history to record at least ten such games.  But he had yet to post a three-point game.  That is, until a mid-March game in Brooklyn against the New York Islanders.

It was a wild game from the start.  Brock Nelson put the Islanders in front less than three minutes into the game, but the Caps stormed back on goals be Lars Eller and T.J. Oshie less than a minute apart mid-way through the period.  Andrew Ladd tied the game for the Isles just 60 seconds after Oshie’s goal, and it looked as if the teams would go to the first intermission tied, 2-2.  But with less than three minutes in the first period, Orlov got the Caps started up ice with a pass from his knees to Evgeny Kuznetsov exiting the defensive zone.   Kuznetsov carried the puck into the Islander end, and they he curled back along the left wing boards looking for support.  He spied Orlov trailing the play and backed off to the blue line while feeding Orlov skating down the wall.  Orlov curled through the left wing circle and from a severe angle threw a shot at the Islander net that snuck between goalie Christopher Gibson and the near post to give Washington a 3-2 lead at the first intermission.

The Caps added to their lead early in the second period on an Andre Burakovsky goal.  Mid-way through the period, Orlov found Nicklas Backstrom circling through the right wing circle in the New York zone on a power play.  Backstrom fed the puck in front to Kuznetsov for a shot from Gibson’s left.  Gibson got a glove on it, but the puck trickled out to Backstrom, who sent it home to give the Caps a 5-2 lead and Orlov a secondary assist.  In the third period, the teams exchanged goals less than a minute apart mid-way through the frame, but Oshie took a feed from Orlov as he was reaching the red line and snapped a shot into the Islanders’ empty net to seal the Caps’ 7-3 win and Orlov’s first three-point game as a Capital.

It was a night many Capitals seemed to lack excitement for, and for many Capitals it became one to forget.  An early-November game in Buffalo against a team struggling with a 4-8-2 record.  Buffalo jumped all over the Caps in the first period, outshooting them, 15-4, but Philipp Grubauer kept the game scoreless.  He could not hold them off forever, though, allowing an Evander Kane goal less than three minutes into the second period.  Alex Ovechkin tied the game late in the period, but the Sabres reclaimed the lead early in the third period on a Benoit Pouliot goal.  Kane added an empty netter in the last minute to wrap up the scoring in a 3-1 Caps loss.

For Dmitry Orlov it was a particularly frustrating night.  He was not on ice for any of the three Buffalo goals, but he had five of the Caps’ 25 shots on goal (tied for the team lead and his highest shot total of the season) and eight of the team’s 43 shot attempts (tops on the club).  He did not record a point in 24:24 of ice time.

Postseason… Coming into the 2018 postseason, Dmitry Orlov appeared in 24 games without a goal and with only three assists.  He got his first career playoff goal when he opened the scoring in the Caps’ series clinching 6-3 win over the Columbus Blue Jackets in Game 6 of the opening round series.  It was the middle game of a three-game points streak in which he had a goal and three assists, doubling his career point total in the postseason.

By the time it was over, Orlov doubled his playoff game total, appearing in all 24 games for the Caps.  He went 2-6-8, plus-5, to set career highs in goals, assists, points, and plus-minus.  His 48 shots on goal almost doubled his total from the previous two postseasons combined (26).  Similarly, his hit total (40) and blocked shot total (43) were career bests, and he logged his highest average ice time in three trips to the playoffs (24:12, third behind John Carlson (25:38) and Matt Niskanen (25:23)).

Looking at the cap hits of active defensemen, Dmitry Orlov’s $5.1 million is nestled between five players at $5.0 million (Detroit’s Danny DeKeyser, New Jersey’s Andy Greene, Vancouver’s Alexander Edler, Toronto’s Morgan Rielly, and Philadelphia’s Andrew MacDonald; and Buffalo’s Zach Bogosian at $5.143 million.  In that neighborhood, Orlov might be a bargain.  Only Rielly is younger (24; Orlov is 25), Only Rielly (51 points) and Edler (34) had more points than Orlov in 2017-2018 (31), only Edler had higher average ice time (24:15 to 23:07), and Orlov had the best plus-minus (plus-10; all numbers from capfriendly.com).  Orlov has five more years on his current deal, too.  He has improved his offense with reasonable consistency since his injury plagued early years as a pro, and he has improved his play in his own end to the point where he gets steady top-four minutes with Matt Niskanen as the nominal top pair among the defensemen.  It has been a slow, or at least slower than either player or club might have liked, process, but all the hurdles and all the opportunities have established Orlov as part of a solid foundation on the blue line for years to come.