The Peerless Prognosticator is ON THE AIR!!! -- Game 22: Capitals at Bruins, November 16th

The Washington Capitals continue alternating home and road games in this stretch of the schedule, heading north to Boston on Saturday to complete a back-to-back set of games to open the weekend.  Both teams will be completing back-to-back sets of games, the Caps having faced Montreal on Friday, while the Bruins will be returning home after a visit to Toronto to face the Maple Leafs. 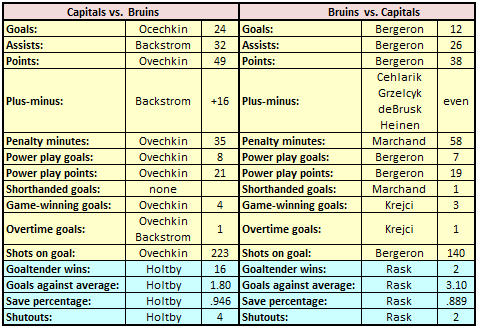 The Capitals do not often go into a contest facing an opponent with more goals than Alex Ovechkin, but they will do so on Saturday when they face David Pastrnak.  Still only 23 years old, Pastrnak has established himself as a potential successor to Ovechkin as the league’s elite goal scorer.  He is one of nine players to post more than 30 goals in each of the three seasons preceding this one, and he was one of four to do it at the age of 22 or younger last season (Patrik Laine, Auston Matthews, and Connor McDavid were the others).  With 16 goals in 18 games so far this season, tops in the league through Thursday, he seems almost a shoo-in to hit the 30-goal mark for a fourth consecutive season.  He has been almost as consistent as he has been productive in finding the back of the net.  He started the season with consecutive games without a goal, but since then has experienced consecutive games being blanked only once (Games 16 and 17 against Detroit and Philadelphia, before breaking that streak with a goal against Florida on Tuesday).  The most impressive number he might have posted this season to date, though, occurred in a game in which he did not score a goal.  On October 27th, in a 7-4 win over the New York Rangers, Pastrnak became the first player this season to post five assists in a game (Leon Draisaitl did it for Edmonton in November) and only the sixth winger to do it since 2005-2006.  In 12 career games against the Caps, Pastrnak is 3-5-8, minus-11.

By the time Thanksgiving rolls around, Patrice Bergeron could find himself third on the all-time list of games played for the Boston Bruins.  He went into Friday’s game against Toronto having played in 1,046 NHL games, all with the Bruins, six behind third-place Don Sweeney (1,052).  It is no small feat for a player who has lost large chunks of games of his career to injuries.  Among them were a 16-game absence last year to a rib injury, a 13-game absence late in the 2017-2018 season to a fractured foot, lower body injuries that kept him out for eight games in October 2017, and so on.  He has never played a complete 82-game schedule in his 15 seasons preceding this one.  Nevertheless, the absences did not diminish his production all that much.  Save for the abbreviated 2012-2013 season in which he posted 32 points in 42 games, he had at least 50 points in all nine other seasons since 2009-2010.

Bergeron is also among the most accomplished two-way centers of his generation.  Only once in 15 seasons before this one was he a “minus” player (minus-28 in 77 games for a 76-point Bruins team in 2006-2007).  Since that season, Bergeron is one of only three players in the league, all of them Bruins, to post a cumulative plus-minus of plus-200 or better (Bergeron is plus-206, Brad Marchand is plus-206, and Zdeno Chara is plus-248).  To that add that he is a four-time winner of the Selke Trophy as the league’s best defensive forward, one of only two forwards in NHL history to win it four times (Bob Gainey did it for Montreal four consecutive years, 1977-78 through 1980-81).  He was also a finalist in four other seasons, the latest one being last season (he finished third in the voting).  Bergeron is also a master of the faceoff circle.  Since entering the league in 2003-2004, he is one of only two players to take at least 20,000 faceoffs (Sidney Crosby is the other), and of the 413 players since then to take at least 1,000 draws, he is 13th in winning percentage (57.1).  Bergeron is 12-26-38, minus-13 (worst against any team he has faced), in 47 career games against the Caps.

Urho Vaakanainen is the youngest defenseman to dress for the Bruins this season, and while the 18th overall pick of the 2017 Entry Draft might represent a large part of the Bruins’ blue line for the future, he dressed for only one game this season to date.  For the moment, the youth movement is reflected primarily in Charlie McAvoy.  He was also a high draft pick, taken 14th overall by Boston the year before Vaakanainen, and if he has faced a challenge to date in his young career, it is staying healthy.  He appeared in only 63 games in his rookie season in 2017-2018, missing four games to heart arrhythmia and 15 games to a sprained knee ligament.  Last season, he missed 20 games to a concussion and another seven to a lower body injury.  Nevertheless, the Bruins re-signed him in September to a three-year/$14.7 million contract.  Why?  Even missing all of those games, McAvoy’s 60 points was second highest among all defensemen playing in their first two NHL seasons over the last two years (Will Butcher had 74 over those two seasons for New Jersey).  McAvoy has been slow out of the gate so far this season, though.  Through 18 games played as of Thursday, he was 0-4-4 despite averaging more than 22 minutes of ice time per game, tops among all Boston defensemen.  McAvoy is 0-1-1, minus-1, in five career  games against Washington. 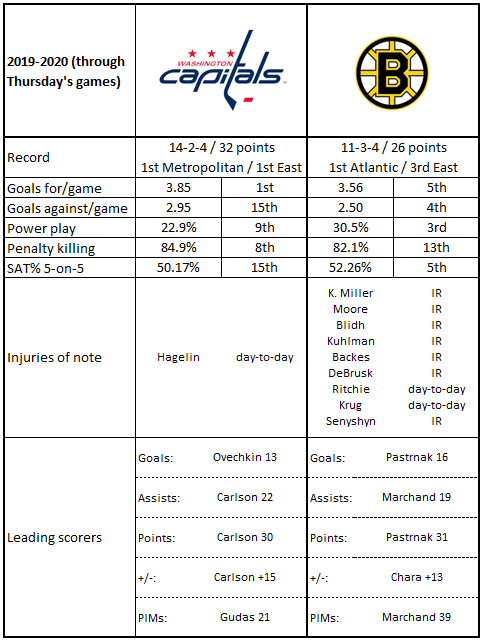 1.  Boston has the biggest positive goal differential on home ice so far this season (plus-19; 39 for and 20 against).

2.  The power play is an essential element to the Bruins’ success at home.  Their 38 power play chances on home ice are tied for fifth (38) through Thursday, their 13 power play goals are most in the league, and their efficiency (34.2 percent) ranks third.

3.  The Bruins are not welcoming hosts.  They have committed 47 penalties on home ice, second-most in the league (Anaheim had 52 through Thursday), and they have three misconduct penalties, tied with San Jose for most in the league.

5.  Boston is the only team remaining in the league not to have lost a game in regulation on home ice this season (7-0-3).

1.  The Caps have nine wins in 11 road games so far this season, most in the league.

2.  Washington’s 177 blocked shots on the road lead the league.

3.  The Capitals are shooting 12.7 percent through 11 road games so far, best road shooting percentage in the league.

4.  The Caps are the only team in the league to have taken more than 40 penalties on the road and have all of them be minors (48).

5.  No team in the Eastern Conference has taken more faceoffs on the road than the Caps (693), and only four of the 16 teams have a worse winning percentage than Washington (47.6).

It would appear that Jaroslav Halak will get the nod in goal for Boston when they host the Caps on Saturday.  The name “Halak” conjures bitter memories for Caps fans, so bitter that you would think he was product of combining the DNA of Patrick Roy, Terry Sawchuk, and Jacques Plante, with a sprinkling of Martin Brodeur and Dominik Hasek for good measure.  There is a lot of ill will in Capitals Nation for a goalie who has a total of 13 career playoff wins, but four of those wins came in 2010 as a goaltender for the Montreal Canadiens in one of the biggest first-round upsets in Stanley Cup playoff history.  Halak went 4-2, 2.46, .939, and stopped 131 of the last 134 shots he faced in that opening round series against the Caps in winning Games 5-7 and sending the Caps to an early spring of golf and beer in which to drown their memories.

But Halak has been a good at times, mediocre at others goaltender for 14 seasons.  He will soon appear in his 500th NHL game, but in the 496 games he appeared in to date since he entered the league in 2006-2007, he is 14th in wins with 258 (note that he trails Braden Holtby (266) in this stat despite Holtby’s entering the league four years later and playing in more than 60 fewer  games), 23rd in goals against average (2.49; minimum: 100 games), 24th in save percentage (.916; minimum: 100 games), although he is sixth in shutouts (48).  He has not been a clear number one goalie for large parts of his career or at least not shouldered a large workload (he has never started 60 games in a season and started more than half of his team’s games only six times in 13 seasons preceding this one).  This season, he is once more good from time to time, not as good about as often.  He is 4-1-2 in seven appearances, but he benefits from goal support, too.  He has allowed four goals in three games and suffered a regulation loss in none of them (2-0-1).  Even against the Caps in the regular season his numbers have not been particularly impressive.  In 21 appearances (19 starts), he is 9-10-0, 2.80, .900, with one shutout.  Since earning his only career shutout against the Caps with the Islanders in December 2016, Halak is 2-4-0 (two no-decisions), 3.32, .886 in eight games against Washington.

Evgeny Kuznetsov seems to be putting his early season three-game suspension behind him.  Having appeared in only 17 games to date, he is still in the top-25 in points (18/tied for 23rd) and is one of 18 players averaging more than a point per game (1.06/T-16th).  He had a string of four straight multi-point games broken in the Caps’ 2-1 Gimmick win over the Philadelphia Flyers on Wednesday night, but his trick shot goal was the game-winner for the Caps.

Boston started the season as one of the best teams in the league, going 11-1-2 in their first 14 games.  But they find themselves on a four-game losing streak (0-2-2) pending their result in Toronto against the Maple Leafs on Friday night.  On the other hand, the Caps started a bit sluggishly, going 3-2-2 in their first seven games, but they now hold a 13-game points streak (11-0-2).  Boston also comes into this game banged up with a long injury report posted on Thursday.  For two teams facing one another in the back half of a back-to-back set of games for both, health and momentum might be the keys here.