The Peerless Prognosticator is ON THE AIR!!! -- Game 43: Maple Leafs at Capitals, April 16th

Well, if you are going to go into the post-season having to play tougher opponents, there is no time like the present to see how you stack up against them.  And that is where the Washington Capitals find themselves, about to undertake a week in which they will take on three teams, all from Canada, and all currently qualifying for the playoffs.

First up in what could be a playoff preview – either in the first round or (hopefully) down the road – the Capitals host the Toronto Maple Leafs on Tuesday night.  This will be the last regular season meeting of the clubs, Toronto having won both contests earlier this season by identical 3-2 margins, one in each city.

Toronto played in New Jersey last evening, but leading up to that game had sustained a pretty good run of success. The Leafs went into last night’s game against the Devils with a 6-1-1 record in their last eight games, outscoring their opponents by a 29-17 margin.  Three of the six wins were by margins of three or more goals, including decisions at Ottawa (4-0) and against Montreal (5-1).

Special teams have been impressive for the Leafs in this run, especially the penalty kill.  Over those last eight games the Leafs are 25-for-26 (96.2 percent), part of a longer run in which they are 55-for-58 (94.8 percent) in 19 games since the beginning of March.

The power play has not been quite as impressive, but it has had its moments, going 5-for-27 (18.5 percent) over the 6-1-1 run.  In five of the wins in this stretch the Leafs recorded a power play goal.

In these last eight games Toronto has had points from 18 different skaters and goals from 12 different players.  Phil Kessel leads the club with five goals over this stretch and is tied with James Van Riemsdyk in assists with six.  Kessel leads in overall point with 11, Joffrey Lupul has nine (4-5-9).

Lupul’s point total in this eight-game run is made more impressive by the fact that: a) he missed almost two months of the season with a broken arm, returning only on March 16th, and b) he suffered a concussion on April 4th against Philadelphia, causing him to miss the last four games heading into Monday night’s game against New Jersey.

Here is how the teams compare, numbers-wise (through games of Sunday)... 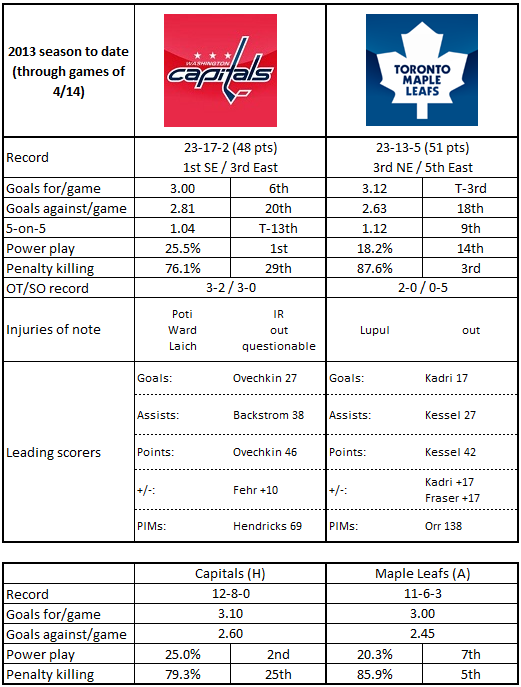 1.  Toronto seems all but assured of ending a seven-season streak in which they failed to make the playoffs.  It is the longest streak in franchise history. Until this streak Toronto had not gone more than two seasons without making the playoffs since enduring a three-season streak from 1925-26 through 1927-28, and in the first of those seasons they went by the name, “Toronto St. Patricks.”

2.  Capitals assistant coach Calle Johansson played on the last Toronto Maple Leaf team to make the post-season, going without a point and a minus-1 in four post-season games.

3.  Toronto is the only team in the NHL to have scored at least 40 goals in each of the first, second, and third periods of games this season.

1.  Washington is now fifth in goal scoring at home with their 3.10 per game average.  They have 13 goals scored in their last three home games.

3.  Washington is at the end opposite the Maple Leafs when it comes to penalties.  Only six teams have fewer penalty minutes per game than the Caps (10.5).

4.  The Caps need better starts.  They have a minus-5 goal differential in the first periods of games this season, a plus-7 in the second period of games, and a plus-5 in the third period of games.

5.  The Caps have been outshot by opponents in 31 of 42 games this season and have a 15-14-2 record in those games.  They are one of eight teams that has not finished a game even with their opponents in shots on goal.

The standard operating procedure in the NHL for identifying injuries is “upper body” and “lower body” injuries, usually hiding some structural injury – a knee, and ankle, a shoulder, a groin – or a concussion.  Mikhail Grabovski has had to deal with other issues recently, a gastrointestinal disorder that, according to head coach Randy Carlyle, has been bothering the 29-year old forward for a couple of years.  It is hard enough to play the game when at tip-top shape, but to deal with a chronic ailment and still perform at a high level (52 goals in 155 games in the two seasons preceding this one) says something about Grabovski’s grit.  Still, he is without a point in his last four games and has only one assist in his last eight games. He is 3-5-8, plus-4 in 17 career games against Washington.

1.  As the first 20 go… Toronto is fifth in the league in first period goals scored, and only Chicago has more wins when leading after one period.  The Caps need to play the first 20 like a road game, keeping things simple.

2.  Happy place.  “Truculence” is a word often used in jest to describe the Maple Leafs, but it fits.  They play fast and loose with the rules.  The Caps cannot be in a retaliatory mode.  Let the Leafs do their thing, then the Caps can do their thing…score power play goals.

3.   Do a volume business.  James Reimer has been the goalie of record in Toronto’s last eight games (including the win over New Jersey on Monday night).  This being the second of a back to back, Ben Scrivens could get the call in goal.  In four of his last six appearances he has failed to reach the .900 mark in save percentage.  Make him make saves.

This will be a challenge for the Caps, even with Toronto coming into DC from a game last night.  The Maple Leafs are 3-3-1 in the back half of back-to-back games this season.  And while the Caps are looking to extend their winning streak to eight games, the seventh win in that streak revealed a number of holes.  If the Caps learn from that third period against Tampa Bay and tend to business, well..