The Peerless Prognosticator is ON THE AIR!!! -- Game 13: Capitals at Panthers, February 12th

The Washington Capitals wrap up their home-and-home set against the Florida Panthers with a trip to the Sunshine State on Mardi Gras.  We covered much of this matchup in the prognosto from Saturday, and since neither team has played since then, there is not much to add.  However, there are some takeaways from that game that you, dear reader, might keep in mind for this one…

-- It was a case of resistible force meeting moveable object when it came to what happens when scoring or trailing first.  The Caps had not won a game when scoring first before Saturday night (0-4-0); the Panthers were 1-4-0 when allowing the first goal.  The Caps lost both games in which they led at the first intermission; Florida was 1-4-0 when behind after 20 minutes.  Something had to give.  It was the Panthers.  Troy Brouwer recorded the only goal of the first period when he scored with 2:15 left.  It wasn’t until the second period when the importance of that score became apparent.  Brouwer scored 3:36 into the period on what would be the Caps’ first shot after Brouwer’s first goal.  That was building on momentum, something the Caps have not done often this season.

Takeaway… Getting the early first goal is nice, but getting the unanswered second one is what puts your opponent behind the eight ball.

-- The Caps have been plagued by undisciplined play this season, but it was lack of discipline that might have done in the Panthers as much as anything in Saturday’s game.  Joel Ward scored eight minutes after Brouwer’s second goal on only the fourth shot faced by goalie Jose Theodore in those eight minutes.  It made for three goals on six shots in a span of 14:10.  Less than three minutes after that goal by Ward, Theodore almost decapitated Mathieu Perreault as he was ducking behind the Florida net, earning an interference penalty.  Florida killed off that penalty, but barely two minutes after that penalty kill they took another penalty.  If not for a coincidental penalty to Mike Green apart from the original Tomas Kopecky infraction, Florida might have dug an even deeper hole on the scoreboard.  As it was, they lost their focus and the competitive portion of the game was more or less over.

Takeaway… Pressure makes for mistakes by the opponent.  Mistakes turn into goals.  Goals turn into frustration.

Takeaway… The troubles the Caps might be having in the second period might be due to having trouble adjusting to the long change in the middle period.  That and adapting to a zone, as opposed to a man-to-man defense such as they played last year might be causing them problems.  What problems this should cause in a road game are not obvious, since it matters most in changes on the fly.  Still, it is just one more thing that needs to be solved on a more permanent basis.

-- Mike Ribeiro had a fine game in the faceoff circle…in the offensive end.  He was 5-for-7 in the attacking end.  The defensive end?... 1-for-7.  It seems a bit surprising that he – an offensive center who has faceoff issues generally – would have led the Caps in defensive zone draws taken.

Takeaway… If Mike Ribeiro is leading the team in defensive zone draws and performing at the level at which he did on Saturday, it would seem unlikely the Caps would escape with another shutout.

-- All six defensemen and all of the top nine forwards finished the Saturday game in “plus” territory. None of the fourth line forwards registered a point, but neither were they exploited by the opposition either on the scoreboard or in terms of taking penalties.

Takeaway… That is the kind of balance – the 18 sets of oars in the water among the skaters rowing in the same direction – that can be very effective and cut down on the wear and tear of the top lines and pairs having to do much more than their share for the Caps to win.

Takeaway… The Caps have even strength issues to deal with (an 0.76 goals-scored to goals-allowed ratio at 5-on-5, for example), but the Panthers are last by a wide margin in this category.

-- Florida has the fifth largest positive spread between its home power play rating (33.3 percent) and its road power play rating (12.0 percent). They have the sixth largest positive spread between their home penalty kill (84.2 percent) and their road penalty kill (69.2 percent).  In other words, their special teams at home are much, much more efficient than they have been on the road.

Takeaway… The Caps beat the Panthers handily in the even-strength game on Saturday.  Chances are, that’s the path to a win in this game, too.

Overall, here is the tale-of-the-tape updated for Saturday’s results between these teams: 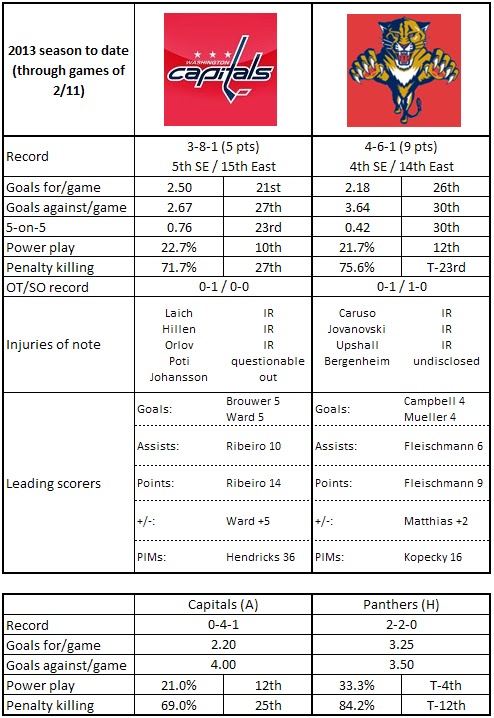 In the end, if the Caps are to get their first road win of the year somewhere (they are 0-4-1, the only team left in the league without a road win), you would think it would be against these Panthers.  Florida has the third-worst home record (points earned), they are awful at 5-on-5, they have the most losses in the league by three or more goals (five), they have been shut out three times (tied with Nashville for most times shut out), and both of their goaltenders are way on the wrong side of 3.00 in goals against and .900 in save percentage.  As bad as the Caps have been so far, this is one they have no business losing.

Posted by The Peerless at 6:15 AM No comments: