As the Washington Capitals were celebrating their Stanley Cup victory on the ice at T-Mobile Arena in Las Vegas last June, the votes were being tabulated for the Conn Smythe Trophy, awarded to the most valuable player of the postseason.  Evgeny Kuznetsov, who some thought should have won it, did not, but he did get five of 18 first-place votes and 13 second-place votes.  Valuable he was.  And what management, teammates, and fans might have hoped was that his performance in the 2018 postseason would be a springboard to a big season in 2018-2019, propelling him into the elite-of-elite strata of players in the NHL.

His 2018-2019 season fit that pattern in his ten-game segments.  He blasted out of the gate, going 5-10-15 in his first ten games, posting five multi-point games in that segment.  However, he regressed thereafter, going his next four segments without hitting double digits in points.  Part of that was the product of his sustaining a concussion on this play in a game against Winnipeg in mid-November:

He missed the remainder of that game and the next six contests.  However, he did come back blazing after that, going on an eight-game points streak upon his return to the lineup.  Perhaps there was a delayed effect of his injury and absence, but for whatever reason, Kuznersov’s point production dropped considerably once that streak ended.  In his last 50 games he went 14-27-41.  That is certainly a respectable level of production, but for a player seen as having elite skill, being tied for 40th in the league in points over that span was a step back. 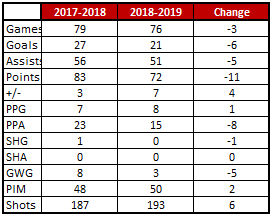 Fearless’ Take… For all the fits and starts to his season, Kuznetsov still finished the year with 51 assists, the third time in his career – third time in four seasons, in fact – that he finished with 50 or more assists.  Only teammate Nicklas Backstrom has more 50-plus assist seasons over the last four years (four) than Kuznetsov (tied with five other players).  And, for whatever inconsistency he might have displayed on a year to year basis, Kuznetsov now stands fifth in franchise history among the 102 skaters dressing for at least 200 games in assists per game and 15th in points per game having not yet reached his 27th birthday.

Cheerless’ Take…  All that is nice, but this is a player in whom the team has made a $62 million investment over eight years.  His cap hit is $1.5 million more per season than Colorado’s Nathan MacKinnon, who is one off the league lead in postseason scoring through Monday and has had consecutive 90-plus point seasons.  One has to think Kuznetsov has another level he hasn’t tapped yet.  And yeah, Peerless harps all the time about faceoffs, and yeah, they don’t matter much in the larger scheme of wins and losses.  But it can be an indicator of one’s respect for one’s craft.  The gold standard for that sort of thing is Sidney Crosby, who might be the most ruthlessly self-critical player in the history of the sport, focused on making strong those things that he might see as weaknesses – shooting, defense, and yes, faceoffs.  Only once in six seasons has Kuznetsov been over 45 percent for a season, and he was 38.7 percent this season.  Folks have noticed, but the point is whether his attitude, or at least his performance in this area is an indicator that he isn’t being all he can be in other areas, at least on a consistent basis.

Odd Kuznetsov Fact… Throw out the game against Winnipeg when he was injured and skated only 4:10, and Kuznetsov was 11-14-25, plus-5, in 18 games in which he won at least 50 percent of his faceoffs.  There were 23 occasions in which he took more than five draws in a game and won fewer than 35 percent.  He was 4-13-17 in those games.

In the Stanley Cup final against the Vegas Golden Knights, Evgeny Kuznetsov went 1-7-8, plus-5, in the five game series.  In four regular season games against the Golden Knights coming into this season, he was 1-5-6, plus-3.  So, when Vegas visited Capital One Arena in the third game of the regular season, one might have wondered if Kuznetsov could sustain the magic.  It took less than 20 minutes to get at least an indication.  On a power play late in the first period, Nicklas Backstrom stepped out from the right wing call with the puck.  As he was surveying the play, Derek Engelland flattened Brett Connolly in the slot with a cross-check to the back.  Backstrom and Kuznetsov took advantage of the commotion, Backstrom sending the puck in front as Kuznetsov was circling out to the top of the crease.  Kuznetsov redirected the puck through the legs of goalie Marc-Andre Fleury to put the Caps on top with just 34.5 seconds left in the period.

It was his deft skating and passing that set up the Caps’ second goal midway through the second period.  Skating the puck into the right wing circle, he had the presence to pull the puck back just out of the reach of defenseman Colin Miller’s stick.  He then hit Alex Ovechkin on the other side for a one-timer that made it 2-0, 9:42 into the period.  Cody Eakin got one back for Vegas before the end of the period, but the Caps went back up by a pair on a power play early in the third.  Kuznetsov occupied Backstrom’s usual spot on the right wing wall as Backstrom circled around the back of the Vegas net.  Kuznetsov inched in and threaded a pass through defenders Jon Merrill and Nick Holden onto the tape of the stick of Backstrom at the top of the crease.  Backstrom had only to turn his stick blade to redirect the pass for a 3-1 lead 5:08 into the period.  Kuznetsov earned his third primary assist of the game five minutes later, taking a pass from Brett Connolly in the neutral zone, skating the puck into the left wing circle, and faking a shot before sending a pass through defender Ryan Carpenter’s skates to Ovechkin for his second goal of the game and completing a four-point night for Kuznetsov in the 5-2 win.   It was Kuznetsov’s sixth game of four or more points in his career and the first of two he had this season.

Chicago has not been among Evgeny Kuznetsov’s favorite stops, if his numbers are an indication.  Although he had only three games at United Center before this season, he was just 1-0-1, minus-2, with only four shots on goal in those three games.  His fourth trip to the Windy City might have been his worst and perhaps the Caps’ worst game of the season.  Chicago scored early and often, racing out to a 3-1 lead less than 15 minutes into the game.  The Caps did close to within a goal twice, but they could not find the equalizer in an 8-5 loss.  For Kuznetsov’s part, he skated 16:44, did not record a point, suffered five blocked shot attempts, lost seven of 11 draws, and finished a team-worst minus-3.

Postseason… Kuznetsov was fine, if not dominating at home against Carolina, going 0-5-5, plus one in the first three home games of the first round series, but he was invisible on the road, not recording a point and going minus-1, even though he recorded twice as many shots on goal in Carolina (10) in three road games than he did in the first three games at Capital One Arena (five).  That left things up to Game 7 at home.  When he scored his only postseason goal, 13:22 into the second period contest, it gave the Caps a 3-1 lead.  As it turned out, it would be the last goal scored by the Caps this season, the Hurricanes winning in double overtime, 4-3.  He finished a far cry from last season’s Conn Smythe-worthy trip, finishing 1-5-6, minus-1 in seven games.

Looking ahead… Kuznetsov has six more years on his current contract, and next year will be the first year of that deal in which a modified no-trade clause provision will be in effect (source: capfriendly.com).  Not that he is going anywhere soon; Kuznetsov is as much a part of the core of this team as anyone at this point.  But he has not yet stepped up into that highest echelon of players that his skill set and occasional displays suggest he could occupy.  He has one 80-plus point season in six years with the Caps.  It will be interesting to see if this “off” year by his standards cannot serve as inspiration to make it two such seasons next year.

Evgeny Kuznetsov might be among the top-five pure talents ever to play for the Capitals. Very few players have exhibited his combination of skating ability, speed, shooting touch, stickhandling, and passing acumen, the hockey equivalent of the “five tool” player in baseball.  When he is at the top of his game, one could count the players in the league who are better on one hand.  But there seems to be a “not quite there” part of his game that defies reasoning.  He has not put together consecutive elite seasons, and his play this season was too often frustrating, despite finishing with more than 70 points for the third time in five full seasons.  As he enters what could be the prime of his career, that kind of elite production on a consistent level will be something expected more than hoped for.