The Peerless Prognosticator is ON THE AIR!!! -- Game 15: Islanders at Capitals, November 5th

The Washington Capitals take the ice on Tuesday night in the second game of their three-game home stand, facing the New York Islanders in a Metro Matchup.

For the Capitals it is an opportunity to tie their longest winning streak of the season - three games - while for the Islanders it will be an opportunity to extend their lead over the Caps for second place in the Metropolitan Division to three points.

The Islanders have been quietly and patiently putting together a team that has depth and skill.  They have done it primarily through the draft.  Of the 15 skaters to dress for ten or more games this season for the Isles, nine of them are home grown draft picks (Matt Donovan, another draft pick, has nine games this season). That list includes the top-four point getters for the Islanders: Kyle Okposo, Frans Nielsen, John Tavares, and Josh Bailey.

You would think that the preponderance of drafted players, especially from 2006 onward, would make the Islanders one of the youngest teams in the league.  The fact is, they are not.  That they are in the middle of the pack, age-wise, is a product of some years on the back line (Radek Martinek (37) and Matt Carkner (33), as well as Lubomir Visnovsky (37) who is currently out with a concussion).

That experience on the blue line translates into good possession numbers, at least for the players with that experience.  Martinek and Carkner have the best 5-on-5 Corsi/on and Relative Corsi numbers among the defensemen, along with Thomas Hickey (source: behindthenet.ca).  It is the young guys – Hamonic, MacDonald, and Brian Strait (a 25-year old defensemen picked up on waivers from the Pittsburgh Penguins last January).  It has made for a team that looks to have potential, and looks to have some consistency issues, too.  Here is how their numbers compare those of the Caps (rankings through Sunday’s games): 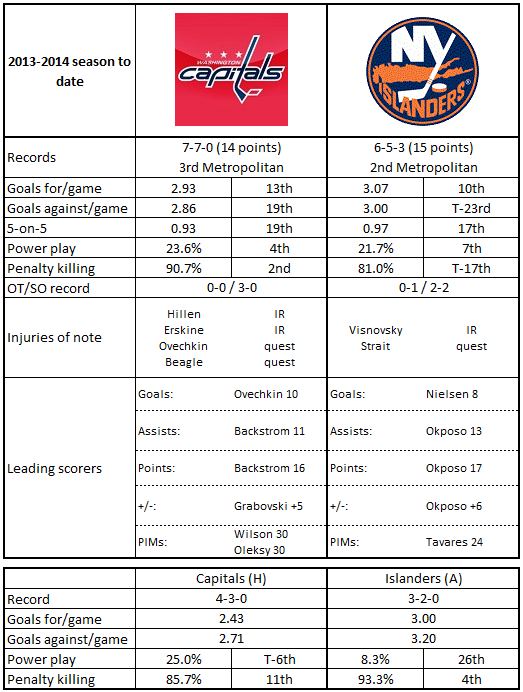 1.  The Islanders are lurching through the early season like a student driver using a stick shift for the first time. They have yet to put together anything more than consecutive wins, which just so happens to be the current streak that they bring to Verizon Center.  What they have not done is lose a road game in almost a month.  On the other hand, they have only two road decisions in almost the last month, wins in Pittsburgh and in Ottawa.

4.  No team has more one-goal decisions than do the Islanders.  New York is 4-4-3 in those games, five of them decided in extra time – 0-1 in overtime and 2-2 in the freestyle competition.

3.  The Caps are 5-2-0 in their last seven games, three of the wins coming by margins of three or more goals.

When the Islanders traded Matt Moulson, a 2014 first-round draft pick, and a 2015 second-round draft pick to the Buffalo Sabres for two-time 40-goal scorer Thomas Vanek, it was a signal…of something.  There is a school of thought that says that the team getting the best player in a deal wins the trade (Caps fans who remember how Jaromir Jagr became a Cap might disagree).  In a salary cap league, this might be less true than in the old days when it was still a dubious truth (remember Eric Lindros?).

Vanek is an unrestricted free agent after this season, and playing on a team much better than the one he left (which is not saying much) he will have a better stage on which to showcase his skills in pursuit of his next contract.  Still, it is not as if this trade suddenly put the Islanders on a short list of Stanley Cup contenders.  And, in obtaining the services of Vanek the Islanders had to give up, in Moulson, one of the more underrated players in the game and a guy who was a great fit as a linemate for John Tavares.

Vanek seems to be warming to his new surroundings.  He was held off the score sheet in his first game with the Islanders, a 3-2 loss to the Rangers.  He had an assist in the Islanders 5-4 shootout win over Ottawa last Friday, then he assisted on the game’s first goal and scored the insurance goal in a 3-1 win over Boston on Saturday.  In 28 career games against the Caps he is 10-11-21, plus-8.

Through 14 games, Troy Brouwer has one even strength point, a goal coming in a 4-1 win over Columbus on October 19th.  That production is a bit light for a scoring line right winger.  Coming as it does after what amounts to a career year, on a goals per game basis (he scored at a 33 goals-per-81-games pace last season), this is a disappointing start to say the least.

Part of it is shooting.  After he had that one even strength goal on five even strength shots against Columbus, he had a total of two even strength shots on goal in his next six games (he has only 12 shots on goal at five-on-five through 14 games).  Part of that is a chicken-and-egg thing.  Brouwer is more of a shooter of opportunity than one who creates on his own.  There is also the lingering problems of second line production overall – is Brouwer a symptom or a cause?

We are of a mind that there is enough blame to go around on that second line for its lack of offensive production.  The other side of it is that the Erat-Laich-Brouwer configuration of it doesn’t have enough playmaking creativity to take advantage of what scoring pop it might have (as a group, their per-82 game career goal scoring levels are 18, 17, and 19, respectively).  Even the reconfigured second line of Marcus Johansson at center, and Laich and Brouwer on the wings for the last two games of last week produced a total of six even strength shots on goal over two games.

Brouwer needs to lift his game, but to do that he might need others on his line to do it as well.  He is not quite a “do-it-yourself” sort of player.  In ten career games against the Islanders he is 2-3-5, minus-2.

1.  Volume, Volume, Volume.  If a skater can get “sheltered” minutes by where he starts play – offensive or defensive zone – and against whom he plays, perhaps goalies can get sheltered minutes, too.  Whether by design or by chance, Evgeni Nabokov has had sheltered minutes against the Caps, having had to face those 24.1 shots per 60 minutes in his last seven games against the Caps as we noted above.

So far this season he is averaging 30.0 shots faced per 60 minutes, and the added workload shows.  He is 29th in goals against average and 31st in save percentage.  The Caps are not a team that generates a lot of shots on goal (20th in the league), but their ability to do so could mean an advantage over a somewhat creaky goaltender.

2.  Discipline.  Only eight teams have fewer minor penalties than the Islanders, and only three teams have fewer penalty minutes per game.  That translates into almost one full shorthanded situation more that is faced by the Caps (3.9/game) than the Islanders (3.0).  Part of that is the fact that the Caps found themselves shorthanded 17 times over their last three games.  The Islanders have only one power play goal on the road this season in five games (1-for-12), tied with Buffalo for fewest in the league.  But let sleeping dogs lie; don’t poke them.

3.  Turnovers are not just baked goods.  The Islanders are a leaky team in this respect.  While the “giveaway” statistic is open to interpretation, only four teams have been charged with more of them than the Islanders.  Of a more concrete nature, the big minutes eaters on defense – Travis Hamonic and Andrew MacDonald – have rather unimpressive possession numbers.  They are 130th and 148th, respectively, in Corsi/on ice per 60 minutes at five-on-five among defensemen playing in at least ten games so far.

In the end… These are similar teams so far, performance-wise.  They are within 0.15 goals scored per game of one another, as well as 0.15 goals allowed per game.  Both are just on the bad side of 5-on-5 goals scored to goals against ratio.  Both are north of 20 percent on the power play.  Even their relative home/road strengths and weaknesses play against one another.  The Caps have been a very good home power play team, but the Islanders have the fourth best road penalty kill in the league.  The Caps have a decent, but unspectacular home penalty kill, but the Islanders road power play has been awful (26th in the league).

It suggests a close game, especially since 11 of 14 Islander games this season have ended in one-goal decisions, and 13 of the last 18 decisions between these clubs ended the same way (Caps are 11-1-1 in those one-goal decisions).  There is little to suggest things will be any different in this game.

Posted by The Peerless at 10:19 PM No comments: