The Peerless Prognosticator is ON THE AIR!!! -- Game 29: Capitals at Sharks, December 3rd

After starting a four-game stretch away from Capital One Arena with a 5-2 win in Detroit over the Red Wings on Saturday night, the Washington Capitals head to San Jose to meet the Sharks on Tuesday night in the first game of the Caps’ annual visit to the west coast.  Washington takes a three-game winning streak into the game as well as the best road record in the league (11-2-1).  San Jose is a team on a roll as well, winners of their last two games and 11-2-0 in their last 13 contests. 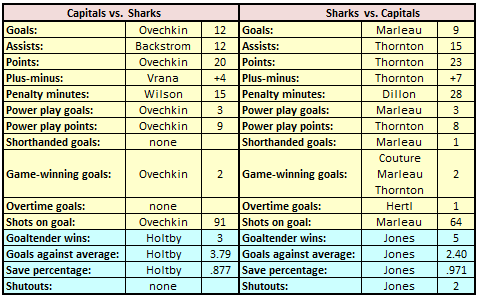 Patrick Marleau has played in more games (1,517), scored more goals (514), and has more points (1,093) than any other player in San Jose Sharks history.  Joe Thornton has more individual awards (2006 Ross Trophy and 2006 Hart Trophy; four first or second team NHL All Star selections), as does Brent Burns (2017 Norris Trophy, three times a Norris finalist, three times a first or second team NHL All Star selection).  But with Marleau and Thornton having turned 40, and Burns to turn 35 in March, it might be Logan Couture’s team now.  The 30-year old Couture has been a consistent goal and point producer for the Sharks since his first full NHL season in 2010-2011.  Since then, he has failed to record 20 or more goals only once, in 2015-2016 when he was limited to 52 games by a fractured right leg and scored 15 goals.  That also happened to be his only full season among his last eight (not including the abbreviated 2012-2013 season) in which he recorded fewer than 50 points (36).  As it is, Couture stands third on the all-time list of Sharks goal scorers (248), fifth in assists (287), fourth in points (535), and fifth in power play goals (71).  With this being the first year of an eight-year/$64 million contract signed in July 2018, he would seem to have many productive years yet to improve his ranking in franchise history.

This season, Couture had a bit of a slow start goal scoring, posting only one in 13 games in October while adding nine assists.  However, he tied for the team lead in goals for November (seven, with Timo Meier and Tomas Hertl), and he led the team in assists (11) and points (18).  He was tied with Evander Kane in game-winning goals (two) and tied with Brent Burns for the team lead in power play points for the month (three).  And, all of his scoring damage came in his last 12 games after starting November without a point in three games.  In those 12 games, Couture has five multi-point games, including a four point game (1-3-4) in a 6-5 win over Minnesota on November 7th that kicked off his November scoring surge.  In 15 career games against Washington, Couture is 5-8-13, plus-2.

Brent Burns and Erik Karlsson get more attention on the San Jose blue line, and they are tied for the team lead in points among defensemen (21), but Marc-Edouard Vlasic deserves some attention for an approaching milestone.  Tuesday will mark Vlasic’s 994th NHL game, all with the Sharks and the most games played by a defenseman in Sharks history.  He will soon hit the 1,000 game mark for his career, becoming only the third player in team history to hit that mark (Marleau: 1,517; Thornton: 1,062).  Vlasic is second only to Burns in team history in goals among defensemen (71 to Burns’ 126), assists (248 to 313), and points (319 to 439). His career plus-134 rating is second in team history among all skaters to Thornton’s plus-175 and is fifth-best among active defensemen.  This season, his four goals trail only Burns (five) among Shark defensemen.  Vlasic goes into this game with points in consecutive games, the second time he has cobbled together consecutive games point streaks (he had points in Games 14 and 15 against Winnipeg and Vancouver to open November).  Odd Vlasic fact… The Metropolitan Division is the only one against which Vlasic does not have a point this season.  He is 2-0-2 in seven games against the Atlantic, 0-2-2 in seven games against the Central, and 2-2-4 in 12 games against the Pacific Division.  On the other hand, this will be only his third game against a Metro opponent this season.  Vlasic is 3-3-6, plus-6, in 18 career games against the Capitals.

The Sharks are widely viewed as a veteran team, but they have dressed seven rookie skaters this season.  None have played more games than center Dylan Gambrell (23 games).  Gambrell owns a bit of an odd place in Sharks draft history.  He was taken with the 60th overall pick in the 2016 Entry Draft, the second lowest “first” pick in any draft in San Jose history except for 2008, when Justin Daniels was taken by the Sharks with the 62nd overall pick as their first pick in that draft (Daniels never played in the NHL).  Although this is technically Gambrell’s “rookie” season, he did get glimpses of the NHL in each of the last two seasons, dressing for three games in 2017-2018 and another eight last season without recording a point in any of those 11 games.  He got off to a decent start this season with four points in eight games, including his first NHL goal in a 4-3 overtime win over Buffalo on October 22nd, but since scoring that goal, Gambrell is 1-1-2, minus-4, in 15 games.  Odd Gambrell fact… He does not have a point in 11 home games this season; all of his six points were recorded on the road.  This will be his first career appearance against the Caps. 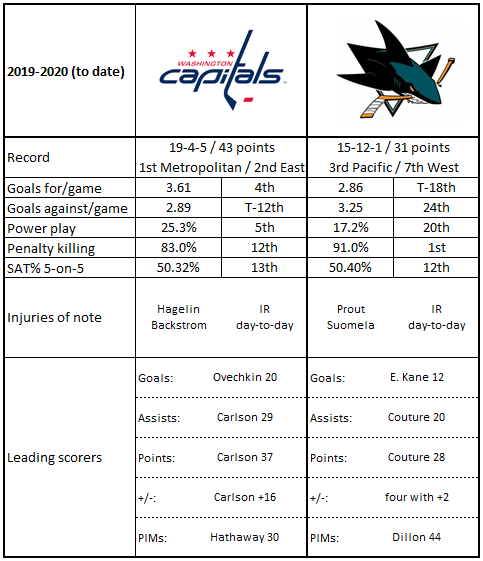 1.  San Jose’s power play struggled in November.  Only the Buffalo Sabres finished the month with fewer power play goals (one) than did the Sharks (four, tied with Anaheim).  Only Buffalo was worse, conversion-wise (2.7 percent) than the Sharks (9.5 percent).

2.  On the other side, the Sharks allowed fewer power play goals (four) than any other club in November, and their 91.7 percent penalty kill was best in the league for the month.

3.  The Sharks were credited with the most takeaways in the league in November (142).

5.  The Sharks had the best differential in shot attempts at 5-on-5 in close situations in November (plus-97).

1.  When Tom Wilson scored against Detroit on Saturday, he became the Caps’ fifth player to hit double digits in goals in 28 games this season.  The Caps did not have their fifth player with ten goals last season until Game 34.  Oddly enough, it was Wilson who became the fifth to reach that mark when he scored the game-winning goal in the Caps’ 2-1 win over Buffalo on December 21st.  His goal against Detroit to get to ten goals last Saturday was also the game-winner in the Caps’ 5-2 win.

2.  The Caps finished November with the highest standings points per game played among Eastern Conference teams (1.57/22 points in 14 games).  Only the Dallas Stars did better overall (1.62/21 points in 13 games).

3.  Only teams finished November with fewer power play chances than the Caps (36).  Dallas had 35, and Boston had 34.

5.  Washington finished November as one of four teams to neither score a shorthanded goal, nor allow one.  Boston, Florida, and Winnipeg were the others.

Goaltenders are an odd lot.  Hey can be hot, until they are not, and vice versa.  Take Martin Jones.  In his first two NHL seasons, spent primarily in a backup role with the Los Angeles Kings, he had a good 16-11-2, 1.99, .923 record in 34 appearances and seven shutouts.  In his first year in San Jose after being traded by the Kings In June 2015 with Colin Miller and a 2015 first round pick to Boston for Milan Lucic and then again to San Jose four days later by the Bruins for Sean Kuraly and a first round pick in the 2016 Entry Draft, Jones took on the heavy load and finished 37-23-4, 2.27, .918, with six shutouts and finished seventh in Vezina Trophy voting as the league’s top goaltender.  But then, the wheels got loose.  In his next three seasons, he won a lot, posting a 101-64-17 record with a 2.62 goals against average and a .908 save percentage.  You could not say he was washed up at age 29, but three seasons of deteriorating goals against averages and save percentage were not good signs.

This season it looked like more of the same – bleak.  Jones started the season 2-7-1, 3.52, .887 (one no decisions) in 11 appearances.  Then, it was as if a switch was flipped on.  In his last 11 appearances, Jones is 10-1-0, 2.59, .905.  Those ten wins were three more than any goalie recorded in November.  His underlying numbers in this recent run were not elite, ranking near the middle of the pack of goalies with at least 250 minutes played in the month, but at least they are back to trending in the right direction, and he was named last week’s third star by the NHL.  In eight career appearances against the Caps, Jones is 5-3-0, 2.40, .917, with two shutouts.  It might worth noting that his record against the Caps with the Sharks cleaves cleanly into two halves of four games apiece.  In his first four appearances against the Caps he was 4-0-0, 1.00, .963, with two shutouts.  In his last four appearances against Washington, Jones is 1-3-0, 3.82, .876.

This game might end up being the matchup of the hot goaltenders.  Braden Holtby has certainly done his part to hold up his end of the bargain.  Since October 18th and his first appearance after allowing three goals on as many shots in less than eight minutes in a 6-3 loss to the Colorado Avalanche, Holtby is 12-1-2, 2.48, .924.  No goalie has as many wins in that span, and Holtby is highly ranked in both goals against average (tenth) and save percentage (11th) among 40 goalies with at least 500 minutes played over that period.

This game is among the toughest gets on the regular season schedule, the recent success of the Caps against the Sharks notwithstanding.  The challenge is compounded by the Shark’s reversal of fortunes of late that have made them almost unbeatable anywhere over the last month, although there are hints that might be coming to an end, at least at home, where the Sharks have split their last four decisions (2-2-0).  The Caps have found a lot of ways to win on the road – win big (four multi-goal wins) or win small (seven wins by one goal), win with offense (seven wins with four or more goals scored) or with defense (six wins with two or fewer goals allowed), win by playing overtime (six wins in extra time).  It makes for a resilient and opportunistic club when playing on the road.  They will need to be both against the Sharks.