The Peerless Prognosticator is ON THE AIR!!! -- Game 67: Sabres at Capitals, March 7th

The Washington Capitals take to the ice in the second of their season-high five-game home stand on Saturday night when the Buffalo Sabres come to town.  For the Caps it will be an opportunity to win their 18th game in the 2015 portion of the season, while the Sabres come to town having won only 19 games all season.

It has been a difficult season for the Sabres, especially since mid-December.  On December 15th they defeated the Ottawa Senators, 5-4, in a trick shot competition to bring their record to 13-16-2.  Since then, however, Buffalo is 6-24-3.  Part of that record includes a 3-13-2 mark on the road.

Those three wins on the road since December 15th for the Sabres have come over their last six road games (3-2-1, prior to their game in Ottawa on Friday night).  Not that the Sabres have done it with offense in their recent road success.  In the six games, Buffalo has only 13 goals scored.

Cody Hodgson has been involved in four of those 13 goals over the Sabres last six road games, going 2-2-4.  It is more of what had been an oddly and utterly disappointing season for the former 10th overall draft pick (2008).  Hodgson is 4-7-11 in 60 games overall this season but has just one point (a goal) in 30 home games thus far.  If makes his ten road points (tied for fourth on the team) look prolific in comparison.  When he scored a goal in the Sabres’ 4-2 win over Columbus on February 24th, it broke a 27-game streak without a goal.  In eight career games against the Caps, Hodgson is 4-2-6, minus-2.

Brian Gionta is the other Sabre with two goals over this 3-2-1 road stretch.  One of those goals was scored in three-point night (1-2-3) against the Vancouver Canucks on February 26th, a rare 6-3 blowout for the Sabres.  That is probably a season high-point for Gionta, who has only 19 points in 51 games (7-12-19).  He did have one other three-point game this season, back on November 18th in a 4-1 win over the San Jose Sharks (two goals, one assist).  In the 28 games he played between his three-point efforts, though, Gionta was just 4-6-10, and he missed 13 games to an upper-body injury.  In 36 career games against Washington, Gionta is 10-14-24, plus-9.

Goaltending will be an issue for the Sabres going forward.  Jhonas Enroth and Michal Neuvirth, who had 62 starts between them for the Sabres this season, were sent off at the trading deadline to Dallas and the New York Islanders, respectively.  That leaves the primary goaltending duties in the hands of Anders Lindback, who arrived in Buffalo from Dallas in the Enroth trade.  This is Lindback’s fourth team in a five-year NHL career.  Nashville, Tampa Bay, and Dallas were his former stops.  He has yet to establish himself as a number one goaltender (he does not have more than 47 appearances at any of his career stops so far), so if there is a silver lining here, Lindback should have his opportunities with the Sabres.  He should not lack for work, since the Sabres are last in the league in shots allowed per game (35.3).  Lindback is 2-2-1, 2.75, .888 with one shutout in five career appearances against the Caps. 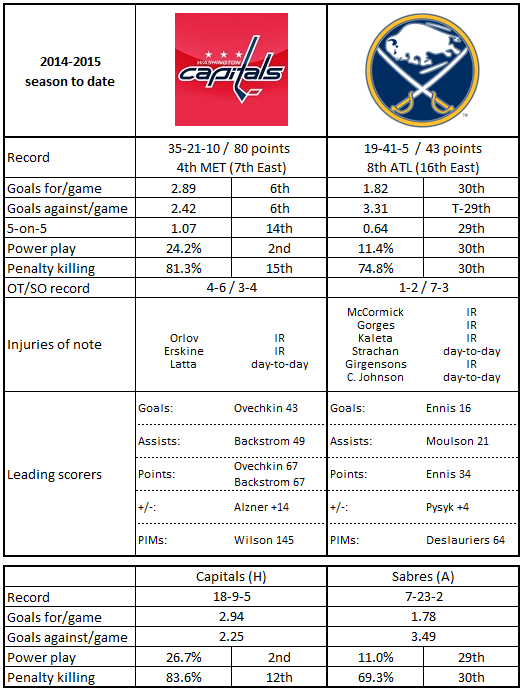 1.  Buffalo does not come by their 30th place standing in the league by chance.  No team has suffered more losses by three or more goals than the Sabres (23), and no team has a worse winning percentage in such games (.115).

2.  The Sabres do not tend to hang around in games, as one might already assume.  Only 13 times in 65 games have the Sabres taken a lead into the third period, the fewest in the league.  No team has fewer wins in those situations (nine), and only Edmonton (.611) has a worse winning percentage in such situations than Buffalo (.692).

5.  It is hardly surprising that Buffalo is last in the league in Corsi-for percentage at 5-on-5 (37.0).  However, that percentage might not capture the magnitude of the situation as much as their team Corsi plus-minus.: minus-1422.  That is right.  Through 64 games the Sabres had been out-attempted at 5-on-5 by an average of 22.2 attempts per game.  That minus number is more than twice as bad as the league’s 29th place team, Colorado (minus-693).

1.  When the Caps were held to one goal in their 2-1 loss to Minnesota on Thursday it was the 12th time this season that they were held to one or fewer goals in regulation or overtime.  They still have a long way to go to match last season’s mark of futility.  In 2013-2014 the Caps had 22 such decisions.

2.  Thursday’s loss was just the third time this season that the Caps held an opponent to two or fewer goals and lost in regulation time.  They lost to the New Jersey Devils, 1-0, on November 14th, and then to the Sabres, 2-1, on November 22nd.

When the 2012 draft was approaching, McKeens Hockey had this to say about an amateur prospect from Latvia playing in the USHL…

“[Zemgus] Girgensons is the type of player you would love to have on your team, but hate to play against. His physical brand of hockey, work ethic and hunger for the puck is unrivaled by any player in the USHL and arguably his draft class. Girgensons plays the game the only way he knows how – in your face and full throttle – as he goes through players rather than around them… The opposition has to constantly be alert when he is on the ice, as he will hit with authority and can also burn a team on the scoresheet with his hands.”

Girgensons was taken by Buffalo with the 14th overall pick in that 2012 draft.  After a year with the Rochester Americans of the AHL, Girgensons made to the big club, posting eight goals and 22 points in a 70-game rookie season.  This season he elevated his game, producing 15 goals and 15 assists and reaching the NHL All Star Game in a display of Latvian/Sabre pride (or ballot-box stuffing, depending on your perspective).  He is already fourth in his 2012 draft class in career goals (23) and fifth in career points (52).  Girgensons has not slowed much since the All Star break; He is 2-6-8 in 14 games since he appeared in the All Star Game.  In four career games against the Caps, Girgensons has one assist.

“Huge, mean and nasty S.O.B. who brings a lot of snarl to the rink every night and is the best pure body-checker in this draft group. Loves the physical contact aspect of the game and is always looking to initiate contact in corners and around the walls. Would rather run over his check than around him – punishes opponents at every opportunity. Intimidating physical presence causes fear among OHL d-men. Stands up for teammates and provides skilled players more room to operate. Excellent when he drops the gloves and is not a liability skating 5-on-5. Will never be a sniper, but chips in offensively by causing turnovers and dominating down low in the crease.”

It was a scouting report not all that different from Girgensons, but Wilson’s development as the 16th overall pick in that draft has been quite so.  Wilson spent the season following his draft in the OHL with the Whalers, but found himself in the Caps’ lineup at year’s end, taking the ice for three games in the Caps’ seven-game loss to the New York Islanders in the first round of the playoffs.  Age considerations prohibited his playing in the AHL the following season, and the Caps felt that another year of junior hockey would not be productive in Wilson’s development.  He spent the 2013-2014 season with the Caps, one of seven Caps to appear in all 82 regular season games and one of just three NHL rookies to do so (Nathan MacKinnon and Tyler Johnson were the others).

Wilson’s progress has been modest, at least with respect to performance measures within the rules.  He has just seven goals and 24 points in 135 NHL regular season games.  He does have 296 penalty minutes, four times the number of the 2012 draftee with the next highest number (Nail Yakupov with 74 PIMs).  Girgensons and Wilson – similar players in style and, to a degree, in potential – were separated by just two spots in the 2012 draft, but their development to date has not been as close as their respective draft positions would suggest.

No team can, as they say, just throw their sticks on the ice and win in the NHL.  That said, what excuse could one offer for the Caps to lose this game?  Even if Alex Ovechkin sits out a second consecutive game, the Caps are superior to the Sabres in every meaningful statistic and on an individual level are superior at every position.  It has been more than a month since the Sabres beat a playoff-eligible team from the East (Montreal, 3-2 on February 3rd, their only win over a playoff-eligible team from the East in 2015).  Not even peeking ahead to the next opponent – the New York Rangers – makes sense as a potential reason to lose this game; the Caps do not host the Rangers until next Wednesday.  This is not a “must win” game in the sense that the Caps must win to keep their playoff hopes alive.  It is, however, a “must win” game in the sense of maintaining credibility as a team that can take care of business and one worthy to reach the post season.

Posted by The Peerless at 2:00 AM No comments: