“Without continual growth and progress, such words as improvement, achievement, and success have no meaning.”
-- Benjamin Franklin

The number “13” has hardly been unlucky for Jakub Vrana.  He was taken by the Washington Capitals with the 13th overall pick in the 2014 entry draft, wears the number “13” for the Caps (the fifth player in team history to wear it), and he scored 13 goals for the Capitals this season.  It was not all Skittles and unicorns, though.  Vrana got off to a good start in his rookie campaign, recording a pair of assists against the Ottawa Senators in the season opener and going 2-3-5 in his first six contests.  However, inconsistency crept into his game, a problem that would stalk him all season.  He went his next five games without a point and was just 2-0-2 in 14 games after that hot six-game start.

The problem was reflected in his eight ten-game segments, which displayed quite a varied level of output across those segments.  He started well (two five-point segments among his first three) and finished well (four points in each of his last two segments), but in-between it was a rather uneven level of production (between one and four points).  And his appearances as the season wore on took on an uneven character.  He missed eight of the last 33 games of the regular season after sitting for just one of the first 49 contests of the season.

The other item of note in his ten-game segments is the manner in which his ice time was reduced.  In his first segment he averaged 13:51 per game in ice time.  However, except for one segment (his sixth, when he averaged 12:59 per game) his ice time dropped in each segment until he averaged just 10:09 in his last segment of the season.  It might have played a factor in his having recorded ten of his 13 goals for the season in his first four segments, but just three in his last four segments of the season. 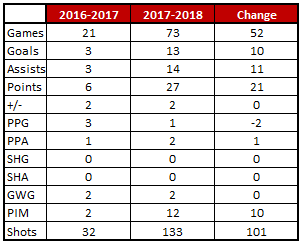 Fearless’ Take… Even with his uneven presence in the lineup and ice time, Jakub Vrana finished in the top-20 in goal scoring among rookies (tied for 17th).  With 13 goals averaging 12:30 per game over 73 contests, only one of those above him in the rankings averaged less ice time (Sonny Milano had 14 goals averaging 11:39 in 55 games for Columbus).  And an active Vrana was part of a successful team.  In 21 games in which he had three or more shots on goal, the Caps were 14-5-2.

Cheerless’ Take… Yeah, about those shots on goal.  The Caps only lost one game in regulation in the ten in which he didn’t have any shots on goal (a 3-0 loss to the Vegas Golden Knights on December 23rd).  And among rookies, his shot attempts on ice numbers were not especially impressive.  Among 60 rookies appearing in at least 40 games, he ranked 27th in shot attempts-for at 5-on-5 (50.15 percent).

Odd Vrana Fact… Jakub Vrana had just one point in ten games against Central Division opponents this season, the first goal of the contest in a 5-2 win over the Colorado Avalanche on December 12th.

After scoring goals in consecutive games in back-to-back games against New Jersey and Philadelphia on October 13th and 14th, Jakub Vrana went into a slump, scoring just two goals over his next 15 games.  On the night before Thanksgiving against the Ottawa Senators, Vrana broke out of his slump.  Late in the first period, T.J. Oshie won a battle for a loose puck just inside the Senators’ blue line. Oshie curled in a snapped a pass to Evgeny Kuznetsov cutting to the net.  Kuznetsov’s attempted redirect from the side of the net was stopped by goalie Craig Anderson, but he could not control the rebound that leaked to the top of the crease.  Vrana was camped out there with inside position on Fredrik Claesson and got enough of his stick on the loose puck to nudge it past Anderson to give the Caps a 1-0 lead 15:21 into the game.

After the Caps scored on a Kuznetsov power play goal less than eight minutes into the second period to give Washington a 3-0 lead, Vrana struck again barely two minutes later.  Dmitry Orlov backhanded a pass to Kuznetsov, who carried the puck out of the Washington end and through the neutral zone.  As he approached the Ottawa blue line he tried to send the puck through Ryan Dzingel’s legs and recover it on the other side, but he lost it to Vrana on his left side.  Vrana stepped up and fired a shot that beat Anderson on the blocker side, wedging under the net frame under the water bottle where everyone but the referee lost sight of it.  The referee signaled a goal, Vrana shrugged his shoulders as if to say, “OK,” and he had his first multi-goal game as a Capital in a 5-2 win.

There were times this season when it just was not too clear that Vrana was fully engaged in his task.  That was the case in a mid-January game against the Flyers in Washington.  He skated three shifts in the first period for 2:57 in ice time to no effect.  Then, he skated another five shifts in the second period for 3:28 with similar results.  And that would be it.  Vrana skated eight shifts and 6:25 in ice time (his low for the season), not seeing the ice for the last 22:46 of regulation and overtime in a 2-1 Flyers win.  He finished the game with no shots on goal, no shot attempts, and one giveaway as the only crooked mark on his score sheet line.

Postseason… Jakub Vrana’s time was doled out sparingly in the postseason, averaging 11:56 in 23 games (he sat for Game 2 in the opening round series against Columbus).  And, he scored only three goals in those 23 games, tenth on the club.  But he was one of six Capitals with at least two game-winning goals.  Both came in the conference semi-final series against the Pittsburgh Penguins.  The first came in Game 2 when he scored from between the hash marks on a power play to put the Caps up, 2-0, in what would be a 4-1 win.  The other came in Game 5 when, after a great save by Braden Holtby to preserve what was a 3-3 tie, he skated with Alex Ovechkin to the other end.  Ovechkin carried the puck wide, and as he was about to curl around the net fed the puck to Vrana cutting across the low slot.  Vrana wasted no time in finding the back of the net before goalie Matt Murray could get back into the net after setting up for an Ovechkin shot that never came.  Vrana finished his first postseason as a Capital with a 3-5-8, plus-5 scoring line.

Jakub Vrana can skate, he has great hands, and he has a lethal shot.  He has the potential to be the best pure sniper of a shooter on this club since Peter Bondra.  But his consistency needs to catch up to his talent.  He has a tendency to go silent and disengaged for stretches, even games at a time.  But he has yet to play his 100the game in the NHL, and he will not be 23 years old until February.  He has time and room to improve those mental aspects of his game that need development.  As he grows and progresses in those areas, improvement, achievement, and success will accompany his game.  This season was a step in that direction.

Posted by The Peerless at 8:52 PM No comments: