Washington Capitals: That Was The Week That Was -- Week 23

Week 23 had it all, a sad end to a road trip, a solid win over a team they might meet down the road, a tough loss after giving up a lead, and finally a good win after a second straight game surrendering a lead.  For the Washington Capitals, it was a busy week indeed. 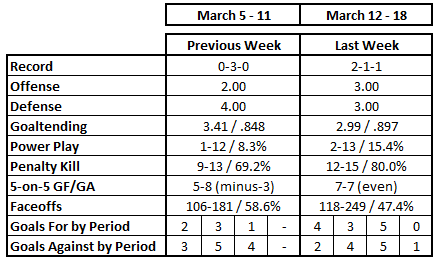 Week 23 was the eighth four-game week of the season for the Capitals and the sixth in which they posted a winning record.  When they beat the Tampa Bay Lightning in the last game of the week, the Caps hit the 100-point mark for the tenth time in team history and for the third season in a row, the third time in franchise history that the Caps posted three consecutive 100-point seasons.  The closed the week with points earned in their last three games after opening the week with a 5-2 loss in Anaheim against the Ducks to close their annual California trip.  The three consecutive games with points was the first time the Caps did that since Games 62-64 to close February and open March.  When they beat the Minnesota Wild, 4-2, last Tuesday, it was their 45th win of the season, the 11th time in team history that the Caps hit that win mark. 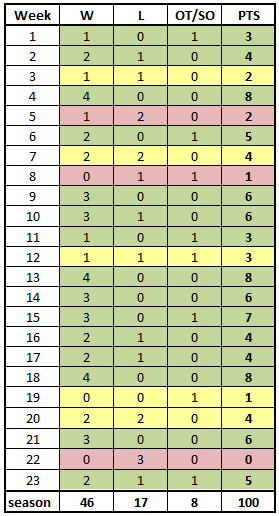 It was an uneven week in the offensive end with the Caps alternating poor outcomes and good ones.  On average it was a pretty good week, although still a bit below the season scoring average to date.  The Caps still finished the week as one of six teams averaging more than three goals per game, and they did finish the week with a pair of games with four or more goals after going six straight games with two or fewer.

T.J. Oshie led the Caps in goal scoring for the week, getting all of them in the 5-3 win over the Tampa Bay Lightning to finish the week.  It was the second hat trick of the season for the Caps and the first on the road this season (Alex Ovechkin had a hat trick on November 23rd in a 4-3 win over the St. Louis Blues).  Oshie added an assist against the Lightning to make it five games this season in which a Capital recorded four or more points.  Oshie joined Nicklas Backstrom in having done it twice.  Evgeny Kuznetsov has the other instance.

Backstrom had a three-assist game against Minnesota and a four-assist night against Tampa Bay on his way to an eight-point week (all assists).  He became the 11th player in the league to record four or more assists in a game this season and became just the second player in the league this season with four games with three or more assists (Tyler Seguin is the other).  John Carlson was the other multiple goal scorer for the Caps in Week 23 (two) and led the defense with four points.

The best news on offense might have been from a player who registered only a single point.  Andre Burakovsky returned to the lineup after missing 15 games with a hand injury, over which the Caps went just 7-6-2.  He had an assist and seven shots on goal in 15 minutes of ice time against the Lightning.

The Caps had a good week holding down shot attempts.  In each of the four games they held their opponent to less than one shot attempt per 5-on-5 minute.  Overall they held the four opponents to 50.16 shot attempts per 60 minutes at 5-on-5 (numbers from Corsica.hockey).  It helped hold the shots down, none of the four opponents managing to get as many as 25 shots on goal at 5-on-5, although two opponents did outshoot the Caps at fives.  It just so happened that those two opponents were Anaheim and Nashville, the sources of the losses this week.  As it is, this team is still in a position to record the lowest average shots allowed per game in franchise history since the 2004-2005 lockout.  This club is allowing 27.7 shots per game; the 2007-2008 squad allowed 27.5 shots per game.

Braden Holtby played all the minutes in goal in Week 23.  It was not an especially good one for him, and it is part of a longer run of sluggish play from Holtby.  In his last six appearances, he is 2-3-1, 3.51, .875.  This week, Holtby strugged at even strength with a save percentage of just .904, 18th among 26 goalies facing at least 50 even strength shots.

As it is, Holtby allowed more goals in his last six games (19) than he did over his previous 11 contests (18).  Still, the Caps remain the only team in the league with two goalies having faced at least 400 shots with a save percentage of .925 or better.  Both Holtby and Philipp Grubauer have save percentages of .925 for the season.

Consistency is a good thing, and the power play is no exception.  The Caps recorded three power play goals for the week, one in each game.  Now, if the opportunities were as consistent.  The Caps had five power play chances in each of the first two games of the week, at Anaheim and at home against Minnesota.  They were successful once in each game, John Carlson against the Ducks and Evgeny Kuznetsov against the Wild.

In the second half of the week, Washington was held to a total of three chances in two games, failing to connect on their only opportunity in their 2-1 overtime loss to Nashville and getting a pair of chances against Tampa Bay to close the week, T.J. Oshie finding the back of the net on the Caps’ first opportunity on Saturday night.

Getting five chances in a game is a comparative rarity for the Caps this season, Week 23 seeing the 12th and 13th times this season the Caps had as many or more.  Getting volume such as that is no guarantee of success, though.  Washington is 7-4-2 in games this season in which they had five or more power play chances.  Their chances came with a fair amount of pressure, getting 22 shots on goal in 19:40 of power play time, but that included a failure to get any shots on goal in their 2:00 of power play time against the Predators. 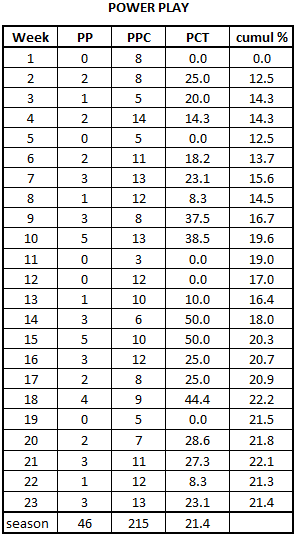 A less-than-typical effort killing penalties held the Caps to barely 80 percent on the other side of special teams and only allowed them to break even on special teams goals for the week.  The seven shorthanded situations they faced against the Wild in the second game of the week was the second-most situations faced this season (they were shorthanded nine times in a 6-2 win over the New Jersey Devils on New Year’s Eve).  They were almost as frequent in shorthanded situations in the opening game of the week, skating five times a man short and once two men short, the Ducks converting just after their 5-on-3 power play expired.

The Caps did better in the second half of the week, facing a total of two power plays (one each) against Nashville and Tampa Bay, although they did allow the Lightning to convert on their only chance in the 5-3 Caps win.  For the week, the Caps allowed three goals on 21 shots in 20:16 of shorthanded ice time.  Not a poor week, but not a great one, either. 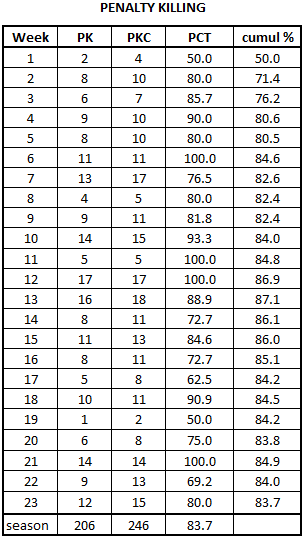 It was not an especially good week in the faceoff circle.  The Caps were over 50 percent only against Tampa Bay, although that game was not without incident as a result of a lapse in one faceoff moment.  Jay Beagle lost a faceoff to Brayden Point with under two minutes left in a 4-2 game, and the draw went back to Nikita Kucherov, who slammed home a shot to make it 4-3.

The big four – Nicklas Backstrom, Lars Eller, Jay Beagle, and Evgeny Kuznetsov – were a combined under 50 percent in all three zones for the week and overall (46.1 percent).  Of the four, only Beagle finished the week over 50 percent (32-58/55.2 percent). 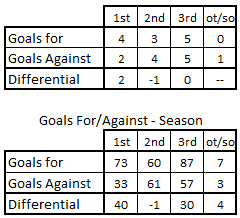 In a week with a total goal differential of even, the fact that the Caps were mostly that by period is no surprise.  Also no surprise, the Caps won the first periods overall by a 4-2 margin.  That made them plus-40 for the season in first period goal differential.  It would have been better but for an uncharacteristic two goals allowed – after taking a 2-0 lead, to boot – against Tampa Bay in the last game of the week.  Those two goals left the Caps with 33 goals allowed in the first periods of games this season, fewest in the league.

The second period continues to be a problem.  Washington finished just minus-1 for the week, but that is also where they are for the season.  Teams have been able to erode first period advantages for the Caps in the middle period, a matter that needs to be addressed in the last few weeks of the season.

There are two good things that can be said about Week 23.  One, the California trip is in the rear-view mirror.  The Caps were outscored on the trip by a 13-6 margin, including the 5-2 loss to Anaheim in the first game of the week to end the trip.  The second thing is that the Caps managed to start and end the week atop the league standings.  However,  their margin was shaved by a point down to two points over the Columbus Blue Jackets, a team that just doesn’t want to go away.  Pittsburgh and Chicago lurk just one point behind Columbus, three points behind the Caps.

Nevertheless, the Caps became the first team to clinch a spot in the playoffs with their win over Tampa Bay to close the week, the 27th time in 43 seasons of team history the Caps will head to the postseason.  That might be the best news to come out of Week 23.