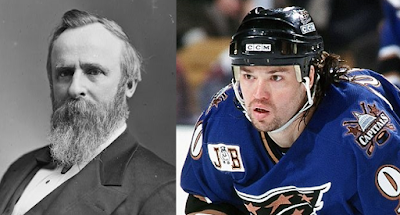 Before there was an Al Gore, there was a Samuel Tilden.  And before there was a George W. Bush, there was a Rutherford B. Hayes.  If you thought the presidential election of 2000 was the most closely contested election in American history, you would be right, given the ultimate margin of victory in the state that decided the election (537 votes in Florida).  But as for the closest election in the Electoral College?  That would go to the election of 1876.  Rutherford B. Hayes won the “election” (we’ll get to why we put that word in quotes in a bit), winning the nation’s highest office by a single electoral vote, 185-184, in a battle that was not settled until two days before Hayes would be inaugurated.

If you are looking for a parallel in the history of the Washington Capitals, perhaps it might be found in the circumstances that led to the Capitals reaching the pinnacle of the sport – the Stanley Cup finals -- by the slimmest of margins.  And if there is a player from that moment who is a parallel to Hayes, it would be Joe Juneau.

Born in Ohio, Hayes grew up and was educated in the state before heading off to Harvard to pursue his law degree.  Upon earning his degree he returned to Ohio to practice law in Cincinnati.  He became someone sought after by local Republican Party officials to accept nomination for a judgeship, but declined twice before accepting an appointment to serve the remaining term of a vacancy as city solicitor, an office he won in the following election.

His political career was interrupted by volunteering to serve in the Ohio Volunteer Infantry in the Civil War after some early misgivings about whether a civil war to keep the Union whole was a good idea.  Hayes was wounded four times in the conflict but survived to resume his career in politics after the war.  And that he did, winning election to the U.S. House of Representatives in 1864 and re-election in 1866.  He resigned his seat the following year to run for Governor of Ohio.  He would win election for that office twice over the next nine years.

It set the stage for the election of 1876.  Borrowing a page from the Democratic Party handbook, the Republicans could not settle on a nominee on the first ballot.  It took seven ballots before Hayes won the nomination narrowly over James G. Blaine, by a margin of just 33 delegates among 756 delegates voting.  On the other side, Samuel Tilden won the Democratic nomination on the convention’s second ballot.

The general election was hard fought and bitter.  When the votes were counted, Tilden won, or so one might have thought.  He won more popular votes than Hayes and gained 184 electoral votes to 165 for Hayes.  However, there were 20 electoral votes unresolved in four states: Oregon, Louisiana, South Carolina, and Florida.  You could say the election went into "overtime."  The situation in Oregon involved the legality of one elector who held office (prohibited under the Constitution) and whether his replacement’s vote was to be for Hayes or Tilden (it was awarded to Hayes).

The situation in the other three states was worse.  There were claims of fraud and intimidation of Republican voters, and in all three states each party claimed victory for their candidate.  All three states had election commissions with Republican majorities, and all three nullified Democratic ballots in question in sufficient numbers to give Hayes the win in all three, giving him 185 electoral votes to 184 for Tilden.

That did not end the dispute.  Democrats were incensed, threats of violence were reported.  Then it became a Constitutional debate over whether the President of the Senate, whose responsibility it is to open and count all of the electoral certificates, could do so without the participation and witness by the members of both Houses of Congress.  Depending on how the constitution was interpreted, the President of the Senate (a Republican) could count the votes on his own and declare Hayes the winner, or the votes would be subject to concurrence of both Houses, and since the House had a Democratic majority, nullifying the votes of one state would give Tilden the win.

As it turned out, that fifth Court member (a Republican who was selected in an odd story of its own) would prove to be the deciding vote in each decision, all of them ending 8-7 in favor of Hayes.  And it was in this way that the 19th President of the United States came to office.

As for the Capitals and Joe Juneau, the team did not look like much of a contender mid-way through the 1997-1998 season.  On New Year’s Day 1998, they sat third in the Atlantic Division, with a 17-15-8 record, 11 points behind the division and Eastern Conference leading Philadelphia Flyers.  Juneau, who was in his fourth full season with the Caps after being dealt to Washington by the Boston Bruins late in the 1993-1994 season for defenseman Al Iafrate, was not even in the lineup, out with a knee injury that was just the latest in a series of injuries dating back to the previous season that cut into his playing time.

Even after a hot start to the new year, 9-2-2 in their first 13 games of January, the Caps could not find consistency, going winless in eight games (0-7-1) following their hot start to the month.  It continued that way over the rest of the regular season, alternating short winning streaks and similarly short winless streaks.  They finished the regular season with a 40-30-12 mark, good for third in the Atlantic Division and a fourth-seed in the Eastern Conference postseason.  And that is when the Caps and Juneau entered the world of the bizarre…the opening round of the playoffs.

It started with the Caps facing the Boston Bruins in the opening round.  Washington went 1-2-1 against the Bruins in the regular season and were shutout in both losses, but when the Caps won the first playoff game by a 3-1 margin, things looked good.  Then they didn’t…then they did.  Then they did again…then they didn’t again.  The teams exchanged wins in double overtime games, then exchanged shutout wins before the Caps finally put the Bruins away in the third overtime contest of the six games played.  Juneau had points in three of the four Capitals wins.

And the bizarre part was just starting.  While the fourth-seeded Caps were vanquishing the fifth-seeded Bruins, the sixth-seeded Buffalo Sabres were beating the third-seeded Philadelphia Flyers in five games, the seventh-seeded Montreal Canadiens were defeating the second-seeded Pittsburgh Penguins in six games, and the eighth-seeded Ottawa Senators were ousting the top-seeded New Jersey Devils in six games in the East.  Fortune was smiling on the Caps, who had a regular season record of 2-2-1 against the Devils, 2-2-1 against the Flyers, and 1-1-2 against the Penguins.  They found themselves as the highest-seeded team left heading into the second round.

In that second round, the Caps made quick work of the Senators, beating them in five games in which all four wins were by multi-goal margins.  And as for Juneau, there he was again with points in three of the four wins.  The only obstacle left between the Caps and the Stanley Cup final was the Buffalo Sabres, a team that lost just one game in the first two rounds of the postseason.

When the Sabres took Game 1, 2-0 in Washington, to make it nine wins in ten postseason games, Caps fans might have thought it would be another “two and through,” a common playoff theme in club history.  Those same fans might have thought, “here we go again," when the Caps, on an own-goal tipped into his own net by Esa Tikkanen, let the Sabres tie Game 2 in the last minute of regulation.  Todd Krygier saved the day early in overtime, though, and the Caps and Juneau (who had the goal to put the Caps in front late in the third period to give them the lead they lost minutes later) went to Buffalo tied in the series at a game apiece.  Juneau did not record a point in Game 3, but the Caps won in overtime again, nevertheless, on a goal by Peter Bondra.  When Washington won Game 4, 2-0, on Craig Berube’s first career playoff goal and Juneau’s shorthanded goal, the Caps had a 3-1 stranglehold on the series.

Nothing comes easy for the Caps, though, and when they lost Game 5 at home, 2-1, Caps fans were feeling that familiar queasiness, especially with having to go back to Buffalo for Game 6.  In that contest, the Sabres took a one-goal lead twice, and the Caps tied the game twice.  For the third time in the series, a game would go to overtime, something the Caps did not fear, having won both of the previous overtime contests in this series and having won four overtime games in a row in the postseason.  The Sabres had their chances early in overtime, including a breakaway chance by Jason Wooley that goalie Olaf Kolzig turned aside.  Through six minutes neither team could end it, but in the seventh minute of overtime…

By the slimmest of margins, a rebound lying in the crease tapped softly under the glove of goaltender Dominik Hasek, Joe Juneau and the Caps reached the place players dream of as kids, the Stanley Cup final.  It is not altogether unlike, by the slimmest of margins – a single electoral vote after a hotly disputed election – Rutherford B. Hayes become the 19th President of the United States.  Neither would have an especially memorable experience having won the prize.  Juneau did have a goal and three assists in four games, but the Capitals were swept in the finals by the Detroit Red Wings, and Juneau would be traded to the Sabres in the following season.  Hayes’ single term in office (he had pledged not to seek re-election) was incident free for the most part, although he did have a number of odd “firsts,” and his presidency is ranked more or less in the middle of the pack by historians.  It would be hard to dispute how it is these two could be related...unless you want a commission to settle the matter.