The Peerless Prognosticator is ON THE AIR!!! -- Game 38: Capitals at Blue Jackets, January 2nd

The Washington Capitals kick off the 2016 portion of their season on Saturday night when they visit Columbus, Ohio, to face the Blue Jackets.  This will be the second meeting between these Metropolitan Division rivals this season, the Caps winning the first meeting by a 2-1 margin on October 30th in Washington.

The Blue Jackets, on the other hand, are a struggling hockey club.  Columbus relieved Todd Richards of his head coaching duties on October 21st after an 0-7-0 start, but the club has not done much better under John Tortorella as Richards’ replacement.  Columbus is 14-15-3 under Tortorella, but their record has been deteriorating over the last five weeks.   In their last 15 games they have three losing streaks of three or more games, and their December was gruesome.  The Blue Jackets finished the month with a 4-7-3 record, and they come into this game as losers in three of their last four games.

Offense has not been altogether bad over the last month.  The Blue Jackets averaged 2.64 goals over 14 games.  Defense and goaltending was another matter.  Columbus gave up an average of 3.29 goals per game in December, causing their overall scoring defense to drop to 28th in the league (3.13 goals per game).

Scott Hartnell is one of those rare combinations of coarse sandpaper and fine skill.  He leads team in goals (15), points (28), and total penalty minutes (71).  He had a fine December for the Blue Jackets, leading the team with six goals in 14 games and tying for the team lead in points (12).  With 15 goals on the season he is on a pace to finish with his fifth straight 20-goal season (not including the abbreviated 2012-2013 season).  Hartnell is 13-12-25, plus-7, in 38 career games against Waahington.

Nick Foligno shrugged off a slow start to the 2015-2016 season and put together a very good December.  After beginning the campaign with one goal (on 1-for-62 shooting (1.6 percent)) and nine assists in 25 games, Foligno recorded four goals in December and tied Hartnell for the team lead in points with 12.  He is coming into the contest with the Caps having recorded points in his last five games (1-6-7).  Foligno is 6-11-17, plus-6, in 24 career games against the Caps. 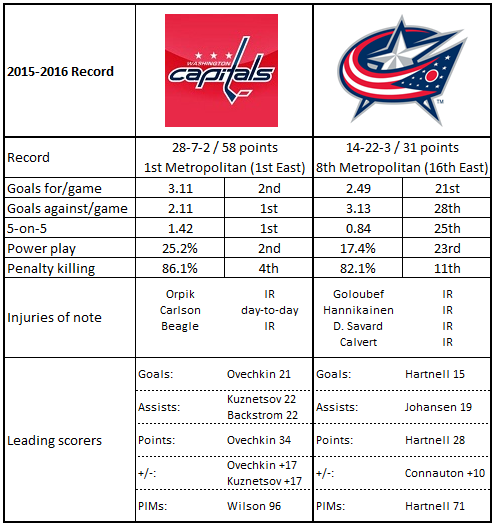 1.  There is an odd coincidence about the Blue Jackets’ performance in December.  They were outscored in goals by a 46-37 margin (not including shootout winners), and they faced 48 shorthanded situations to 39 power plays on special teams.

2.  Goaltending has been an uneven proposition for Columbus so far this season.  Number one netminder Sergei Bobrovsky has decent numbers (2.52 goals against average, .916 save percentage), but he has not been able to reach the level of performance of his 2012-2013 Vezina Trophy season when he was 21-11-6, 2.00, .932, with four shutouts.  Compounding the problem is that he suffered a groin injury in early December that has kept him out of the lineup for ten games.  He could return against Washington on Saturday.

4.  Scoring on the power play has been an issue for the Blue Jackets.  Only Winnipeg (8), Calgary (7), and Philadelphia (7) have fewer power play goals scored on home ice than Columbus (9), and they have the sixth-wort power play percentage on home ice (15.3).

3.  Penalty killing on the road has been a bright spot for the Caps.  They are tied for the third-best penalty kill in the league (86.2 percent), and only Anaheim (7) and Pittsburgh (7) have allowed fewer power play goals on the road than the Caps.

4.  The Caps have been a dominant third period team this season.  Their plus-17 goal differential in the third period is second overall (Dallas: plus-20).

5.  While the Caps dominated play on the scoreboard, and in wins and losses, they were frankly poor in possession numbers for December.  Their overall, score-adjusted, and close score Corsi percentages of 46.5/48.6/46.9 percent for the month (numbers from war-on-ice.com) suggest either an improvement is in order, or a correction in scoring and win-loss results is coming.

When the player who is arguably your most important offensive weapon goes an entire month without a goal, chances are that your team will not fare very well.  Ryan Johansen did not record a goal in December, and yes, the Blue Jackets did not fare well.  Johansen did have seven assists in 13 games in December (three in his last four games), but he was a healthy scratch in a 7-5 loss to the Arizona Coyotes on December 17th, and he did not record a shot on goal in either of his last two games.  He still has a respectable 25 points in 36 games overall, but he is on a pace to finish with his lowest points per game (0.69) since his sophomore season in 2012-2013, owing to goal production that is on a pace to be roughly half (14) of what he had last season (26 in 82 games).  Johansen is 4-4-8, minus-1, in 11 career games against the Capitals.

Brooks Laich played 82 games in calendar year 2015.  It was not one for the scrapbook.  He finished 5-13-18, minus-7, and shot to a 5.0 percentage (five goals on 100 shots).  It looks a lot like his production over the last four seasons overall (an 82-game average of 9-14-22, minus-6, 3.7 percent).  He is getting the fewest minutes of his career in Washington (10:45 per game).  His assist in the Caps’ 4-2 loss to the Carolina Hurricanes was his first point in 13 games.  He is without a goal since recording the game-winner in a 4-1 win over the Boston Bruins on November 5th, a streak of 25 games without a goal and counting.  He has good possession numbers, fourth in Corsi-for percentage among forwards appearing in at least ten games for the Caps (52.6), but if the Caps are to get past their injury issues without undue damage to their win-loss record, it seems reasonable that Laich’s performance numbers – goals, assists, and points – will have to improve some as well.  He is 3-5-8, minus-2, in 15 career games against Columbus.

The Capitals are 8-0-0 in games following losses this season, outscoring opponents by a 28-12 margin (not including shootout winners) with a power play performing at 25.0 percent in those games, and it is one scenario in which the Caps have enjoyed an advantage in special team opportunities (28 power plays versus 18 shorthanded situations).  It is evidence of avoiding the too-high highs and the too-low lows, of taking care of business on a night to night basis.  That has been a recurring theme, but on the other hand, any loss in the context of the Capitals poor possession numbers over the last six weeks can have one thinking about whether any loss is the start of an alignment of record to underlying numbers.  Better than the Caps correct those underlying numbers than test fate with persistently poor possession numbers.

Posted by The Peerless at 1:43 AM No comments: