The Peerless Prognosticator is ON THE AIR!!! -- Game 35: Capitals at Stars, December 19th

The Washington Capitals head out on the road for what will be their longest absence from Capital One Arena this season to date when they open a four-game road trip against the Dallas Stars in Big D on Tuesday night.  The Caps have alternated wins and losses in their last four road contests, all of the decisions of a multi-goal variety, losing a 6-2 decision to the Colorado Avalanche and a 3-1 decision to the New York Islanders, while defeating the Toronto Maple Leafs, 4-2, and the Boston Bruins, 5-3, in what was their last road game last Thursday.  Overall, the Caps bring a three-game winning streak into this contest and are winners of seven of their last eight contests, taking over the top spot in the Metropolitan Division through games on Sunday.

Meanwhile, the Stars are returning home after a 2-1-1 road trip.  On home ice, though, they have been slipping.  Dallas has allowed four or more goals in three of their last four games at American Airlines Center, and while they have split those four games, they allowed five goals in each of their last two home games, both of them losses.

Tyler Seguin and Jamie Benn are tied for the team lead in overall scoring at 29 points apiece.  It is hardly unfamiliar territory for either of them.  Seguin has recorded more than 70 points in each of the last four seasons before this one, averaging 33 goals and 43 assists.  He is on a pace to finish 34-36-70 this season.  He has been productive and consistent, one of only five players over the four seasons preceding this one to record at least 120 goals and 160 assists (Seguin has 133 goals and 173 assists over that span). He has been especially productive at home this season, where he is 9-8-17, plus-7, in 14 home games compared to 5-7-12, minus-11, in 20 road contests.  In 19 career games against the Caps, Seguin is 8-5-13, plus-5.

Since the beginning of the 2014-2015 season, three defensemen have posted more than 30 goals, more than 120 assists, more than 150 points, and are better than plus-30.  That group includes Los Angeles’ Drew Doughty, Tampa Bay’s Victor Hedman, and Dallas’ John Klingberg (if you are wondering, Erik Karlsson would be in that group but for his “even” plus-minus rating).  Klingberg might be the best offensive defenseman no one, or at least among casual hockey fans, has heard of.  He has been a very effective power play quarterback in his four seasons with the Stars, going 9-50-59 on the man advantage, 14th in power play points among defensemen over the past four seasons.  The odd thing this season for Klingberg, though, is that he does not have a power play assist – a power play point – since Game 15 on November 6th in a 4-1 loss to the Winnipeg Jets.  In five career games against the Caps, Klingberg is 0-5-5, plus-1. 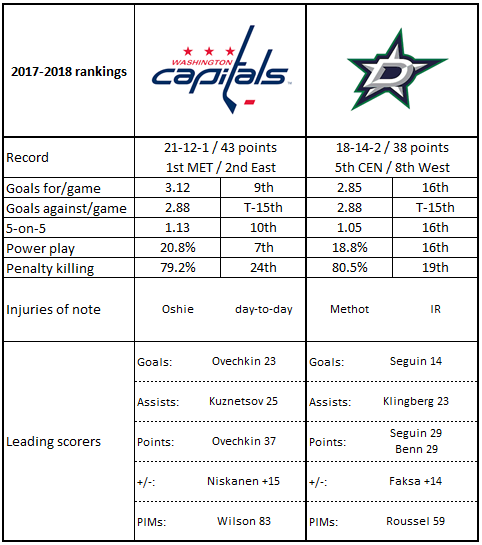 2.  It should be no surprise to anyone who has followed the career of head coach Ken Hitchcock that the Stars are stingy allowing shots on goal.  The 29.6 shots on goal allowed per game is second-fewest in the league (Carolina: 29.5).  This is what Hitchcock-coached teams do.

3.  The Stars do shoot themselves in the foot sometimes by wandering outside the rules.  They have been charged with 152 penalties through games on Sunday, third-most in the league.  Only five teams have found themselves shorthanded more often than the Stars (123 times).

4.  On the other side, Dallas has had only 101 power play opportunities so far this season.  Only five teams have had fewer, and four of them have played fewer games.  Only Edmonton has had fewer power play chances at home (45) than Dallas (48).

2.  The Caps are going to want to turn around their fortunes on special teams.  They are 1-for-11 on the man advantage over their last five games (9.1 percent), lack of opportunity and efficiency being the problems.  They have allowed three goals on their last six shorthanded situations over their last two games.

3.  If Dallas is stingy with shots, the Caps are successful when being the victim of stinginess, their 12 wins when being out-shot in games topped by only four other teams: Minnesota (13), Nashville (14), New Jersey (14), and Toronto (15).

5.  The Caps do have some talent in coming back when scored on first, though.  Their .412 winning percentage in such games (7-10-0) is tied for fifth-best in the league.

Alex Radulov is one of the more interesting stories in the NHL.  A 15th overall draft pick in 2004 by the Nashville Predators, he spent parts of three stormy years with the Preds, scoring 47 goals in 154 games.  “Parts” of three seasons fits, because he played only nine games of that third season, in 2011-2012.  And that was just the end of it. In 2008 he was suspended by the Preds without pay after signing a contract with Salavat Yulalev Ufa of the KHL with one year remaining on his entry level contract.  He returned to Nashville after the 2011-2012 KHL season and skated with the Predators for the remainder of the regular season and the playoffs.  However, in the postseason he would be suspended by the club again (with teammate Andrei Kostitsyn) for violating a team curfew.  That would mark the end with the Predators, who did not re-sign Radulov at the end of the season.

He departed once more for the KHL, signing with CSKA Moscow, but after four seasons there returned to the NHL as a free agent with the Montreal Canadiens last season, with whom he went 18-36-54 in 76 games.  Again a free agent, he signed with Dallas last July, and he has been a very productive player for the Stars.  Radulov is third on the club in goals (11), tied for second in assists (16), and is tied for third in points.  He has goals in two of his last three games after going four games without a point.  In four career games against the Caps, Radulov is 1-1-2, minus-2.

Above, we noted that John Klingberg was one of three defensemen who over the past four seasons posted more than 30 goals, more than 120 assists, more than 150 points, and are better than plus-30.  If we had just said “at least plus-30,” the group would have included John Carlson, who also has 32 goals, 124 assists, and 156 points over that span to make it a foursome.  With a 3-22-25 scoring line so far this season, Carlson is on a pace that would give him his first career 60-point season (he had 55 points in 2014-2015).  And he has been able to achieve this while struggling a bit shooting the puck.  He has three goals on 99 shots so far this season, his 3.0 shooting percentage a career low at the moment.

Maybe it’s an aversion to brisket or perhaps Stetson hats, but Dallas does not agree with the Capitals.  Since the Minnesota North Stars moved to Texas in in 1993-1994 season, the Caps are 4-12-1 in 17 games in the Lone Star State.  They have not beaten the Stars in regulation on their ice since they took a 4-3 decision on October 17, 1995.  That remains the only time that the Caps beat Dallas in Texas in regulation time in this “rivalry.”  If there is a silver lining in this cloud, it is that the Caps took a 4-3 overtime decision in their last visit to Dallas, last January 21st, coming back from a 3-1 third period deficit to force overtime before Jay Beagle won it just 19 seconds into the extra frame.

OK, so law of averages, regression to the mean, change of fortune, dumb luck.  The history has to take a new road sometime.  Why not start now?