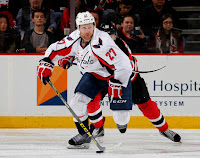 “Twice and thrice over, as they say, good is it to repeat and review what is good.”
-- Plato

Alzner has already passed the 500-games played mark in his career, the tenth defenseman in Capitals history to hit that mark.  He has not missed a game in the NHL since he was assigned to the Hershey Bears on Valentine’s Day 2010, and he skated with the Bears for the remainder of that regular season.  Since dressing for Opening Night of the 2010-2011 season he has appeared in 458 consecutive games, and counting.

What is particularly noteworthy about the season Alzner just completed – bordering on the bizarre, actually – is that his 2015-2016 season is a virtual replica of his 2014-2015 season:

About those hits and blocked shots.  First, hits are a somewhat arbitrary statistic, but then again, Karl Alzner is not generally considered a physical defenseman.  Nevertheless, his 135 hits was the ninth highest total for a Capitals defenseman in a season since the 2004-2005 lockout.  Those 207 blocked shots was third in the league overall and is the most by a Capital in the post-2004-2005 lockout era.

Alzner is not expected to make his biggest contributions in the offensive end, but what he contributed was welcome.  The Caps did not lose any of the four games in which he scored a goal, and they were 14-3-3 in games in which he recorded a point.  It was more his ability to consume minutes that mattered.  The Caps lost just three games in regulation when he logged 22 or more minutes of ice time, going 21-3-7. 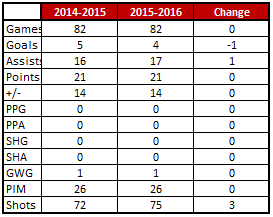 Fearless’ Take… Karl Alzner had only 20 “minus” games all season and only two of them worse than minus-1.  Only once all season did he have as many as three minus games in a row, and those came in Games 77-79, when the Caps had long since settled where they would finish in the standings.  One thing that he might not get enough credit for is not taking himself off the ice.  He was charged withjust 13 minor penalties this season (26 total penalty minutes), and only once did he take more than one minor penalty in a game (February 7th against Philadelphia).  Alzner has never recorded as many as 30 penalty minutes in a season.  He is something of a technician on the ice with playing position and angles, but it extends to his adhering to the rulebook, too.

Cheerless’ Take… Alzner has one of those odd patterns with his possession numbers…up-down-up-down-up-down…  Since he came into the league in the 2008-2009 season, he has not failed to alternate up years and down years in Corsi-for at 5-on-5.  This season was a “down year,” his 49.5 dropping from 51.0 last season.  And this was his third straight year being a minus player in Corsi-for/Relative at fives (minus-2.3; numbers from war-on-ice.com).  That might be because he generally draws tougher defensive assignments, but it still isn’t territory you like seeing.

Odd Alzner Fact… Karl Alzner and Keith Yandle are the only defensemen in the NHL to have appeared in every game of the last six seasons.  Yandle has 460 to 458 for Alzner due to a trade in March 2015 that allowed him to appear in 84 games that season instead of the league maximum 82.

It is difficult to select between games against the Philadelphia Flyers less than two weeks apart – the one in which he set the Caps’ record for consecutive games played (423, since eclipsed by himself) or the one in which he recorded his 100th NHL point.  Well, we took the one in the game the Caps won, the 100th-point game.  The thing of it is, Alzner reached that milestone in perhaps the most “Alznery” way possible.  Take a look at the video clip…

That’s Matt Niskanen going end to end to score a highlight reel goal – the game-winning goal, as it turned out, in a 3-2 Caps win – but nowhere to be seen is Karl Alzner, who earned the primary assist.  Oh, but he was the first one to greet Niskanen in celebration after the goal.  It was one of two assists that Alzner had in the game, his only multi-point game of the season.  Earlier in the game he assisted on Alex Ovechkin’s 30th goal of the season, playing a role in Ovechkin’s hitting that mark for the 11th straight season.

When the Montreal Canadiens came to visit Washington in late February, the Caps were doing quite well.  They had won four in a row and nine of their previous ten games.  They had a five-game winning streak on home ice.

That came apart in a little under 33 minutes, during which Montreal sprinted out to a 4-1 lead.  The last goal – what would be the game-winner in a 4-3 Habs win – came when Alex Galchenyuk and Lars Eller got loose on a 2-on-1 break with just Matt Niskanen back for the Caps (Karl Alzner having been caught up ice).  Galchenyuk finished the play to give the visitors that 4-1 lead.  For Alzner, he was on ice for two of the Canadiens’ goals (the other a power play goal by Brendan Gallagher in the first period), finishing a minus-1 with no shot attempts and just two hits as marks on his score sheet in just 16:42 of ice time, his lowest amount of the season.

The history of the Washington Capitals is strewn with disappointments and their second cousin, “what-if’s.”  As time goes by, perhaps no “what if” question will loom larger in franchise history than “what if Karl Alzner wasn’t so badly injured that he had to sit out the last 44 minutes of regulation and overtime of the Caps’ season-ending playoff loss to the Pittsburgh Penguins?”  The man who played in every regular season and playoff game played by the Caps over six seasons, the best shutdown defensemen the club has, was in the locker room when Nick Bonino scored the series clinching goal in overtime with his partner Matt Niskanen on the ice with his replacement, Taylor Chorney.

Alzner, who had been a warrior, playing through the injury for some time, taking maintenance days so he could dress for games, just could not go any more. To that point, Alzner had a solid postseason in the way he would.  He did not post many points (two), but going into that Game 6 against the Penguins he was a plus-4 and was on ice for only five goals against in the 11 games leading up to the unfortunate finale.  In 12 games overall he was not on ice for a power play goal against.

Karl Alzner is a player who, in a cruel sort of way, is a reflection of the franchise and its four decades of frustration.  He is an earnest, solid player whose virtues are best appreciated over the long arc of the season.  He is consistent, reliable, and dependable.  And then, with the possibility of a deep playoff run this season still possible, it was an assault on the very thing that was perhaps his most noteworthy attribute – his durability – that ended his, and arguably the Caps’ season.

You wonder how it is that one team can find so many different, and particularly cruel ways to come up short in the spring.  In Alzner’s case it was nothing of his doing, just a matter of circumstance.  It does nothing to take away from another in a series of seasons in which Alzner has displayed modest improvements in his game while demonstrating a thinking man’s approach to the game that makes him one of the most effective defenders the franchise has known over the last two decades.