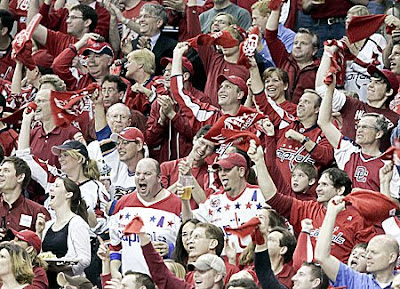 The Washington Post has undertaken to post a series of columns offering tips and suggestions on resolutions for the new year. There is one with which we heartily agree...

Find the Cheap Seats
More to the point...find a hockey game!
If you've watched hockey on television, you -- even if you are a long time fan -- might have trouble finding and following the puck. If you have high-definition television, you can see the pores in the players' skin, see the sweat fly when punches are thrown in fights, and see more of the ice, but you don't get that feeling of coming out of your chair (or recliner) when a player like Alex Ovechkin picks up the puck in the neutral zone and heads up ice like a locomotive with malice in its heart.
Nope, there is nothing -- nothing -- like live hockey. What makes things especially nice these days is that greater Washington (and this includes an area reaching into southern Pennsylvania) is enjoying winning teams and enthusiatic crowds. The Caps are among the most entertaining, not to mention successful, teams in the NHL these days. That Verizon Center is rocked with thousands of red-clad fans only adds to the intensity that one gets from seeing hockey in person.
And just a couple of hours up the road, there is one of the most storied franchises in all of minor league hockey, the Hershey Bears. They play in a great facility (Giant Center) that is easy to get to and a great place to watch a game. A trip to Hershey affords the fan a chance to see some of the youngsters who will be playing under the Verizon Center roof one day in a setting that is equal parts exciting and entertaining for families.
If your resolutions turn toward "finding the cheap seats," you'll probably find those at Verizon Center and Giant Center sometimes in scarce supply -- success does that for a team. But it will be worth the effort; you won't find a more entertaining or a more exciting live sporting event anywhere than live hockey.
Being the "coolest sport on earth" isn't just a reference to the surface on which it's played.
Posted by The Peerless at 6:11 AM

Email ThisBlogThis!Share to TwitterShare to FacebookShare to Pinterest
Labels: resolutions

Great stuff Peerless. And you should invite Ms. Kim to a Caps (or Bears) game with you, she's a cutie. ;)

me and my brother got 9 game tix for Christmas - in the cheap seats with all the other die hards that hope one day to hold STs in the lower bowl... But I totally agree - once you see hockey live, every other sport pales in comparison...