You have to love this guy 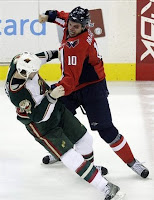 In his Capital Insider column this afternoon, Tarik El-Bashir writes...

"[Matt] Bradley said he required a dozen or so stitches on the inside and outside of his upper lip after his fight with Paul Bissonnette last night. The complexity of the stitch job, he said, is what prevented him from getting back on the ice sooner. 'I wanted to come back earlier, but it took them to the end of the second period to finish,' Bradley said. 'It was a tough job; they did a great job.' He added: 'Stitches aren't a big deal. After that I was fine.'

Bradley said the minor league recall 'wanted to make a name for himself' so he began chirping at him and John Erskine early in the game. 'We were down at that point,' Bradley said. 'So I figured let me do something to spark the team.'"

That's called stepping up for the team. Every day, Bradley seems to be cementing his legacy as a Capital "plumbers" hall of famer.
Posted by The Peerless at 2:22 PM

Email ThisBlogThis!Share to TwitterShare to FacebookShare to Pinterest
Labels: Bradley

Matt the Plumber will not be getting a tax cut if Senator Obama is elected.

The problem is that Brads is trying to step up into the Brashear roll, but has proved to us time and time again that he is no fighter.

There is too much Bradley love from the caps fans given the very little he contributes on ice. Say what you will about his off ice contribution, but seriously 1 million dollars a year for locker room influence is a high price to pay. Personally I wish we kept Cooke over Brads.

And if he keeps fighting like that, he's going to need every penny of that $2500 health care tax cut, my Friends.

He never should have let that AHLer get back up off the ice, but I have nothing but respect for the guy. He's no Donald Brashear but when he fights guys in his class he does just fine.

2-2-6 according to his fight card from last season

Bradley is an absolutely tenacious forechecker, and he has a habit of scoring clutch goals. Not alot of them, but they come at opportune times. Plus he's a friggin' quote machine.

He's worth every penny of his contract IMO.

Bradley shouldn't be allowed to fight at all after getting annihilated by Bissonnette, a player who was in the ECHL last year.

If Bissonnette isn't in his 'class', then who is? There is only a 20 lb difference between the two and Bradley couldn't land a punch. Bissonnette going to the ice had nothing to do with anything Bradley did.

I was interested in the comment that he scored clutch goals so I did some digging and found the following.

In 07-08 Bradley scored 7 goals. 3 of his goals came in blow outs. The rest of the goals came in games that were decided by less than 2 goals.

In 06-07 Bradley scored 4 goals. Only one goal came in games that were decided by less than 2 goals.

In 05-06 Bradley scored 7 goals. 4 goals came in games that were decided by less than 2 goals.

During Bradley’s time spent as a cap, he has scored 18 goals with 8 of them being called clutch. While one could argue that 44% of his goals are clutch, the pure lack of volume and consistency in which these clutch goals are scored causes me to have great trouble saying he has a habit of scoring clutch goals.

I think the guy has a lot of heart, but personally I think he is slightly overpaid. I would be more comfortable paying him around 800k. You may think I am nuts arguing over such a small difference in pay, but I would rather see that money being used to bring up guys like Bourque, Lepisto, and more importantly Alzner.

Would you rather put your money towards guys on an Energy/Checking line or towards future stars of the organization?

Bissonnette may have started in the ECHL last year but the way promotion and such works for fighters isn't quite the same as it does for most players.

HEY Sombrero S--THEAD.You got a problem with AHL Players? That's where some of the best developed their skills.I don't remember reading anything about you anywhere in there.You talk as if you look down your nose at those guys.Tell you what.Pauls a friend of mine.Why don't we make arrangements for the two of you to meet.There's nothing holding your Sombrero up anyway.