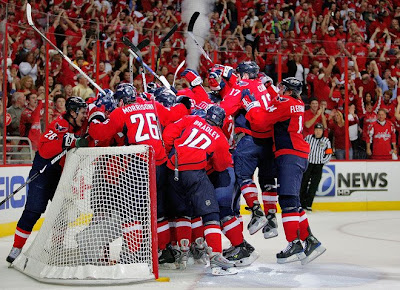 The old man had one left in him, after all.

With the clock ticking down to midnight on the Caps’ season, Sergei Fedorov snapped a shot over the left shoulder of New York Ranger goalie Henrik Lundqvist and into the net, propelling the Capitals to a 2-1 win in the deciding Game 7 of the Eastern Conference Quarterfinal. The digits 2 and 1 figured heavily in this oddly entertaining game…

21 – the number of years since a team – any pro sports team – has won a Game 7 in Washington (yes, including Landover, MD).

21 – the age of the winning goaltender, Semyon Varlamov, who turned that number just yesterday.

2 – the second shot of the game, by Nik Antropov, on a breakaway that Varlamov stuffed. If that shot goes in – 42 seconds into the game – the result might have been very different.

2 – the number of shots the Caps registered in the first period, when they were almost run out of their own building.

1 – the number of shots on goal registered by the Rangers in the third period, when the Caps almost ran them out of the building.

- We noted above that the clock was ticking down to midnight on the Caps’ season when Fedorov scored the game winner. Why? In the last three instances in which the Caps were eliminated from the playoffs, it happened in overtime: 2008 to Philadelphia, 2003 to Tampa Bay, and 2001 to Pittsburgh. We weren’t terribly enthusiastic about this one heading to extra time.

- This game completed the symmetry started in Game 4 – a 2-1 win by the Rangers that featured an odd, multi-deflection goal to get the Rangers on the board. This time, it was Nicklas Backstrom leaving the puck for Alexander Semin, who tried to curl the puck around defenseman Dan Girardi, but the Ranger maintained good position. Semin managed to get a shot off, but it appear to deflect off the stick of Ryan Callahan, which served to deaden the puck as it popped into the air. It floated past Girardi and goalie Henrik Lundqvist, who looked to have difficulty picking up the biscuit as it floated in the air.

- John Tortorella said of his team in the post-game, “we checked our ass off.” Did they ever. Credit is due the Rangers, who could have just packed it in after the dominating performances the Caps laid on them in games five and six. But to a man, they hounded the Caps in their end of the ice, especially in the second period, when the frustration at their inability to get the puck past their own blue line threatened to turn the crowd against them. It was one of the most dominating checking performances under the Verizon Center roof this season.

- Before the game, Capitals coach Bruce Boudreau said of Chris Clark, “"There's a difference between being fresh and being rusty -- if [Clark] plays. Anybody who is put into a Game 7, they're not feeling any rust. They're feeling energy. They're feeling excitement like the rest of us." Well, Clark’s hands were rusty. He had a couple of glorious chances to pot a goal, including one where he had a virtually empty net staring at him, and he couldn’t get the hands to work quite quickly enough.

- If the absence of Blair Betts for the Rangers was to be felt most keenly on the power play, then that was a non factor. The Caps had two power plays and a total of 3:28 in ice time. In a sense, it was old-tyme hockey – the refs weren’t calling much of anything.

- That Fedorov game-winner?...”high glove.” In fairness to Lundqvist, though, he had to be aware of who it was barreling toward the net while Fedorov was settling into the right wing faceoff circle to take the game-winner… Alex Ovechkin.

- Ranger fans kept waiting for it, but Scott Gomez never really showed up in this series. Tonight… no points, one shot on goal, and he lost nine of 15 draws.

- On the other hand, say what you want, but when Sean Avery is not a flaming a**hole, he is a helluva hockey player. He was just about the only Ranger who consistently and assertively took the puck to the net. He had no support for his efforts. An assist, six shot attempts, four hits, and he even won both the draws he took, pretty much by just bull rushing Boyd Gordon and David Steckel, neither of whom is a slouch in the circle.

- John Erskine might not give Caps fans a warm and comfy feeling on the blue line on some nights, but it is hard to argue with the guy’s compete level.

- Caps fans might never say it out loud, but we’ll bet they were thinking it in the first two periods – the Caps were playing scared. Guys were getting rid of the puck as soon as it hit their sticks, and they spent 40 minutes chasing the Rangers all around the Caps’ zone to no good end.

- In the post-game radio show, Brooks Laich said that Chris Clark said something to the effect of, “win 20 minutes, win a series.” That was the last 20 minutes in a nutshell. The Caps outshot the Rangers, 13-1. They out-hit the Rangers, 13-6. They won nine of 17 draws. They had seven blocked shots to four for the Rangers.

- Henrik Lunqvist had a two-headed game. One could look at his saving 22 of 24 shots and conclude that he found his game after a couple of relatively poor ones. On the other hand, the Caps did not pound him on the glove side the way they did in games five and six. It’s worth repeating that the Fedorov game-winner was over his glove hand. As things turned out, 13 of the Caps’ 19 goals were scored to that side.

- The Rangers had the look of a team that had expended so much effort in the first 40 minutes that their tanks ran dry in the third. They had no shots on goal in the last 10:31 and could not get out of their own end in the last 90 seconds in an effort to pull Lundqvist for an extra attacker.

- Seven goals in six games. If you’re looking for a frame of reference for that performance by young Mr. Varlamov in goal, the 1998 playoff run is an interesting comparison. In the four series that spring, Olaf Kolzig’s best was in allowing seven goals in five games against Ottawa, in an era when goals were much harder to come by. A 1.17, .952 set of numbers is quite an inaugural for Varlamov. Consider that in that spring 11 years ago, Kolzig’s numbers were 1.95, .941.

- Of 18 skaters for the Caps, 16 registered hits (Alexander Semin and Tom Poti held off that column of the score sheet).

- Now, here’s an odd one. Number of hits registered by Paul Mara in the series for the Rangers… four. The number for the Caps’ Tomas Fleischmann… four.

- Alex Ovechkin missed 21 shots in the series. No Ranger had that many shots on goal (Ryan Callahan had 19).

Well, now it’s Pittsburgh for the second round, thanks to some late game heroics by Carolina in defeating New Jersey in their Game 7. Pittsburgh presents an entirely different set of challenges – an opportunities – than did the Rangers, but that’s a conversation for another day. Tonight was a case of a lesson learned from last year, and the lesson appears to have been titled, "Resiliency." 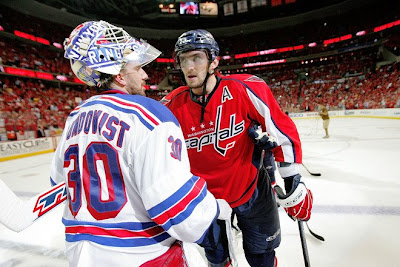