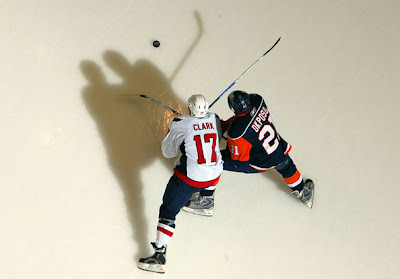 Chris Clark is the kind of player any team with Stanley Cup aspirations has – needs to have – on its team. He hits, he checks, he forechecks, he stands up for teammates, he pays a price to make a play, he doesn’t take a shift off. He’s also missed 114 games the past two seasons, 50 of them this year (plus six of 14 in the playoffs). For the team captain, that has to be agonizing, doubly so for a player with Clark’s work ethic.

But while Clark was dressing for only 32 games this year, the Caps were setting a franchise record for standings points, tied a team record for wins, and finished third in scoring. Clark’s having scored 50 goals over 152 games in his first two seasons with the club looks like a distant memory. What’s more, Clark’s presence in the lineup this year was something of a drag on the club. In his 32 games, the Caps were 17-15 (losses including those in extra time). His ten-game splits lack any sense of continuity…

We didn’t think Clark would come all the way back from his career years in 2005-2006 and 2006-2007. But we couldn’t have foreseen his having another season that looked hauntingly like last one. In this nightmare of a season…

- Clark scored his only goal on New Year’s Day, in the midst of a stretch in which he played in 12 of 14 games.

- Then, he finally succumbed to a problem he’d had since training camp – a torn tendon sheath in his wrist that required surgery and put him on the shelf for the last 33 games of the regular season.

And perhaps most disturbing, in the last 23 games in which he skated this season, he accumulated 30 minutes in penalties (10 minors, two five-minute majors). In was a trend that emerged in his injury-stunted 2007-2008 season (43 PIMs in 18 games). That might have been “cheating” of a sort as a product of the injuries through which he was trying to play. But discipline has been a problem for these Caps for two years, and the Captain being a part of that is not the sort of “lead by example” the team needs, either.

And what had to be especially frustrating for Clark and the Caps was that on both occasions he went on the shelf for long stretches, he appeared to be coming out of his points-scored funk, if not his goal scoring drought. He had assists in consecutive games on November 19th and 20th against Anaheim and Los Angeles before going down to injury two games later. Then, he had consecutive games with assists once more on January 20th and 27th against Ottawa and Boston before going down for the remainder of the regular season after the Boston game.

Clark has two more seasons on a contract that will pay him $2.633 million a year. At age 33, one wonders if the injuries haven’t taken a disproportionate toll on his game, which relies on toughness and a grinding style. He was getting the ice time of a fourth liner at the time he went down to injury, which really is no place for the captain. He has shown an ability to be opportunistic, evidenced by his netting those 50 goals in two seasons playing the opposite wing from Alex Ovechkin. Whether he can regain his health to be something approaching that player next year will go a long way to determining how far the Caps go. For now, though, you don’t want to downgrade a player because of his injury absences, but this wasn’t the Chris Clark Caps fans had become accustomed to when he was playing, either. Has his absence and lack of production the last two years turned him into "Captain Dunsel?" Hopefully, he can heal this off season and put the bad taste of the last two years out of his memory.

Email ThisBlogThis!Share to TwitterShare to FacebookShare to Pinterest
Labels: Chris Clark, the tens 2008-2009

At least you didn't go with "then give three cheers and one cheer more." I love him, and he continues to be one of my favorite Caps, but Clark wore the C like one that "hardly ever sinks at sea." Ugh.

I'm glad Clark could play in Game 7 against the Rangers. Sorry he's had such a bad stretch.

I recall going to the Caps game against Detroit in January and noticed he was a scratch. Presumably healthy, I thought. I left the game with a bittersweet feeling -- happy the Caps won but feeling there's no longer a place for Clark, unless he was bumping one of my other favorites from the line up. (Third line right wing, Clark's normal slot then, essentially meant 'healthy scratch next game'.) I assumed Clark would play in the next game against Ottawa (and was dreading the news of who the healthy scratch would be). But -- no Clark. And then on the following day, we learned Clark was to have surgery for his tendon sheath. So, not exactly a healthy scratch after all.)