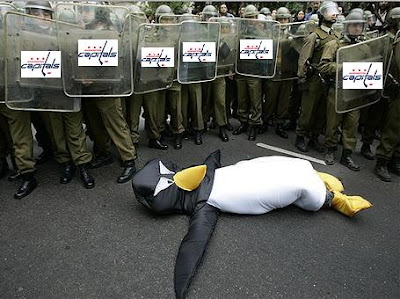 Can you say his name NOW?!

OK, so Crosby got a goal. He does that. Ovechkin got one, too. But if you had “Semyon Varlamov” before the game as the guy who would save the Caps’ bacon in Game 1, then buy a lottery ticket. The rookie goalie, who was supposed to face an offense that was to the New York Rangers what an F-16 fighter is to a paper airplane, faced that offense and faced them down, for one game at least.

But the whole game comes down to what happened at 17:59 of the second period and the score tied, 2-2. Sidney Crosby skated through the neutral zone with Chris Kunitz -- Mike Green and Tom Poti back for the Caps. At the Caps’ line, Crosby left the puck for Kunitz cutting behind him. Kunitz curled in as Crosby darted for the net. Kunitz laid a pass right onto Crosby’s tape for what looked like a tap-in for what would have been the tying goal. But Semyon Varlamov planted his left skate, pushed off and dove at the shot Crosby took, getting the paddle of his stick on the puck just as it reached the goal line. The puck never crossed, though, as Varlamov swept it out so that Mike Green could move it out of danger.

If the Penguins scored there, the outcome – given the record of teams holding a lead at the second intermission so far in the playoffs – is probably very different. It was hardly Varlamov’s only ten-bell save, though. In stopping 34 of 36 shots on the afternoon, there was the puck that hit a skate on a Penguin power play and ended up right on the blade of Mark Eaton’s stick. Varlamov came out and took away any space Eaton had to shoot at, swallowing the shot in his midsection with 11:26 left in the second. There was the two-on-one for Pittsburgh – Ruslan Fedotenko and Petr Sykora – on which Varlamov darted across to foil Sykora’s attempt of a pass from Fedotenko with 3:55 left in the second. There was Evgeni Malkin winding his way through the neutral zone and down the right wing boards, finding Fedotenko cutting to the net for a back door play, but Varlamov was there one more time to dart across the crease and foil Fedotenko as the clock was ticking toward four minutes to play in the third.

There wasn’t any doubt, Varlamov was the game’s first star.

- Even the “save of the playoffs, as it was described on the NBC broadcast, is not always just the goalie. Look at the replay. Even though Tom Poti was beaten to the net by Sidney Crosby, Poti got enough of Crosby with his stick to perhaps throw off Crosby’s shot. If Poti is not there, Crosby might have just buried that shot.

- It’s only one game, but it was not an auspicious start for Evgeni Malkin. He had an assist (on the Mark Eaton goal that, as Pierre McGuire put it, “had a lot of odor on it” for the way Varlamov whiffed on the attempted glove save) but was otherwise unheard from. Three shot attempts (two on goal), and not much fire in his game. He even lost both draws he took against Alex Ovechkin.

- Alright…that shot resulting in the Eaton goal might have been tipped by Boyd Gordon before it eluded Varlamov's glove.

- OK, it worked…but if that slap pass from Alexander Semin to Alex Ovechkin for the 5-on-3 power play goal didn’t work, folks would be saying a lot of the same things this evening that they were saying last spring when Ovechkin passed up a shot to try to feed Sergei Fedorov late in Game 7 against the Flyers.

- The Caps, who were abused in the faceoff circle to the tune of 28-14 in the first two periods, were 14 of 18 in the third period, including winning the last four draws taken in the last 2:06 of the game.

- What is it with Matt Bradley and that corner down by Section 103? He skates down there, throws a puck at Henrik Lundqvist…it goes in. This afternoon, he takes a feed from Brooks Laich, glides into the same corner, throws the puck in front, and David Steckel bangs it home. It’ll be renamed, “The Bradley Corner,” if this keeps up.

- We thought Nicklas Backstrom would be a key in terms of his playmaking. He started the play on the Ovechkin power play, and it was his pass to Tomas Fleischmann for the game-winner. And there are folks who probably weren’t even aware that he was out there.

- Even though the Caps were hammered on faceoffs in the first two periods and lost that battle for the game, 32-28, they were 11 of 18 in the defensive zone. David Steckel – this afternoon’s winner of the hard hat – won six of eight, mostly at the expense of Sidney Crosby, against whom he was five for six.

- John Erskine…eight hits, a third of the Caps’ total.

- But it was Erskine who was caught at the red line, unable to keep Bill Guerin from feeding Crosby speeding toward the Caps’ end for what would become the game’s first goal.

- The Penguins had five power plays…they had six power play shots. Five of them came from defensemen Sergei Gonchar and Kris Letang. Tom Poti and Mike Green had as many shots on the Penguin power play (one apiece) as did Evgeni Malkin (one). If the Penguins keep that up, they’ll find it difficult to get a power play goal in this series.

- Marc-Andre Fleury stops a lot of pucks…he also gives up a lot of rebounds. If the Caps could convert a third of what were presented to them this afternoon, this game would have been over at the second intermission.

Once again, we serve to remind that it’s “first to four,” not “first to one.” And this makes seven of eight times in Caps-Pens history that the Caps have won Game 1. There will be bumps along the way, but the Caps got the games they needed out of the players who needed to have them – a goal by Ovechkin, a pair of assists by Backstrom, more energetic play from Mike Green, and a great performance from Varlamov.

Now, they have to be better, because Pittsburgh will be. This one, though…. Great job, boys.
Posted by The Peerless at 7:01 PM

It might have been the most exciting 3-2 game I've ever seen. How many posts has Ovie hit during this post-season? He had two more today. Varly's stick save was absolutely amazing, but the two on ones ("ones" plural) he stopped were almost as spectacular.

His ceiling is looking pretty damn Chartres-esque, at the mo.