One Play, Two Points of View

Earlier today, the Washington Capitals defeated the Chicago Blackhakws, 4-3, in overtime.  But the incident that has tongues a-wagging and keyboards a-clacking is the hit by Alex Ovechkin on Blackhawks defenseman Brian Campbell.  On the one hand, it was an incidental hit -- a "hockey play" -- that merely had an unfortunate result.  On the other, it was a premeditated attempt at injury that was borderline felonious.  We've obtained exclusive footage (ok, screen shots from the NBC feed) of the sequence of events, and commentary from each side of the debate...

OK, here is Campbell getting control of the puck at the Chicago blue line, and there is Ovechkin doing what he's supposed to do as the first man in on the forecheck -- go after the puckcarrier.


What you see here is Brian Campbell in open ice about to get control of the puck and start the other way.  Unbeknown to him, there is lurking in his wake -- like the merciless Great White Shark (no coincidence he's wearing a white jersey, better to camouflage himself) -- Alex Ovechkin drawing a bead on his unsuspecting prey.
* * * * *

Here is Campbell tracking down the puck sliding through the faceoff circle.  Ovechkin is skating after him to force Campbell to make a quick decision of what to do with the puck, which is what you want the player to do in that instance.  Duncan Keith is quietly thinking, "uh-oh..."


Here is Campbell, skating after the puck while Ovechkin has locked onto his target, fully armed and ready to inflict maximum damage.  Duncan Keith is like the Secret Service agent walking along with the limousine in Dallas, powerless to prevent what is about to happen a mere feet in front of him.
* * * * * 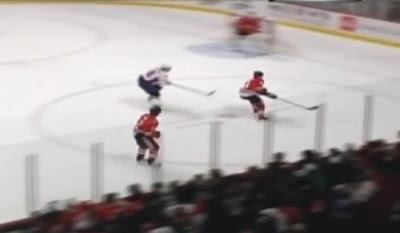 Campbell is sweeping the puck to the side boards, leaving it for Duncan Keith, but his body is blocking Ovechkin's view.  Ovechkin can't be sure Campbell doesn't have the puck.


Campbell is sweeping the puck to the side boards, thinking his role in this play is over for the time being.  But he cannot know the malice that lurks in the beating heart of Ovechkin as his prey lies vulnerable to what is about to unfold.
* * * * * 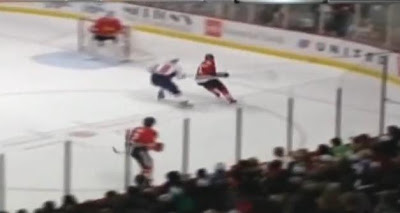 Campbell turns away from his pass, taking him into the path of Ovechkin and leaving him in no position to fend off a collision.  He is leaning into the play, precariously perched in such a fashion that perhaps the slightest nudge will knock him off his skates entirely.  Antti Niemi appears to be shouting "LOOK OUT," but Campbell not understanding Finnish, thinks he is saying "NICE PASS."


Campbell is circling away from the puck, no longer a part of the play, but Ovechkin trains his sights on him, determined to finish the kill shot.  Goalie Antti Niemi can only watch helplessly as the assassination takes place.
* * * * * 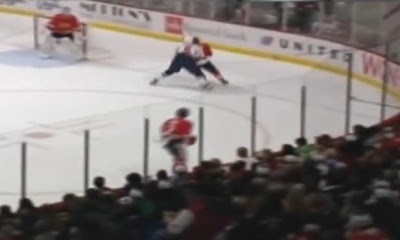 Ovechkin makes contact with Campbell, who is still leaning in the opposite direction from the pass he made, leaving him unable to brace himself from any hit that might come.  Duncan Keith is quietly thinking, "yup...uh-oh."

The kill shot -- Ovechkin delivers his 235 pounds of mayhem directly to the numbers of Campbell, a shot from which Campbell has no hope of recovering.  Duncan Keith is spellbound by the horror unfolding.
* * * * * 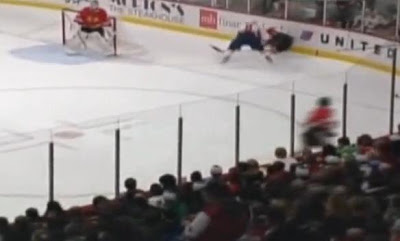 Unable to brace himself from contact, Campbell falls forward awkwardly, landing in the end boards shoulder first.  Ovechkin is not in what one might think of as the sort of stance that would indicate a desire to drive the player into the boards.


Ovechkin is leering over his target, completing the kill shot.  Our Russian is bad, but one could almost hear him freakishly shrieking, "DIE BLACKHAWK SCUM...DIE!!!"  Or maybe, "oops..."  Like we said, our Russian is bad.
* * * * * 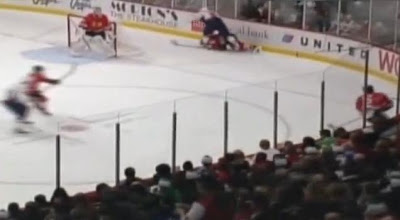 Ovechkin is trying to avoid the fallen Campbell, who he knows has taken a bad fall.


Ovechkin is about to provide the piece-de-resistance, trying to cut Campbell in two with his skate as he passes over him.  The Morton's the Steakhouse advertisement provides one last bit of cruel irony, for Ovechkin has just feasted on the carcass of Brian Campbell in one of the most dastardly displays of on-ice violence in the history of the sport.
* * * * *

We do not mean to make light of an injury -- it is never a trivial matter.  It's just that in the last eight hours or so we have read some strange reactions to it.  From, "what's the big deal?" to "When is the date for execution?"  We are inclined to think the play was justly penalized, but whether it merited the five-minute major and game misconduct, we're not entirely in agreement with that.

Looking at it, there is the hit, and there is the effect. What Ovechkin did was not an especially egregious play, physically. He pushed Campbell. In open ice, Campbell gets up and skates away. It’s the circumstance — Campbell was vulnerable and had no opportunity to brace himself for a full-on hit into the boards. And that led to the unfortunate effect.

This isn’t Ovechkin trailing Campbell and running his head into the boards (or, to repeat the verb one wag I saw using on Twitter, Campbell was "rammed" into the boards). It was a shove. The effect was much greater than the hit.

Is Ovechkin to blame? That’s a tough call. In real time, does a player have time to process an answer to the question, “should I hit this guy?” When Ovechkin shoved Daniel Briere into the Sabres' bench door frame a couple of years ago, you could fault Ovechkin for that. To me, this is a much tougher call. Campbell had just played the puck (although it was well off his stick when Ovechkin made contact).

If Ovechkin is suspended, I think I will be able to understand the reasoning, even if I don't agree with it.  But on its face it is not a clear cut call and perhaps merely one player getting into an unfortunate position based on the play he made.  Not to make it Campbell's fault, not at all; he made the smart play there.  But at the speed of this game, even the smart play -- or something as simple as a shove -- can have unfortunate results.
Posted by The Peerless at 11:34 PM

It will be interesting to see the fallout from all of this. Ovechkin is obviously not going to change his style of play, much to the benefit of the League and us Capitals fans. Suspensions won't do it, fines won't do it, what do you do? Personally, I saw a boarding penalty committed by an aggressive player trying to finish his check. Was it a late hit? Barely enough to be penalized, but that's my biased opinion. Had Campbell been a half-second closer to the boards, or if Ovechkin had hit Campbell a half second earlier, the hit wouldn't have nearly been as controversial.

I love OV, but the hit was late and unexpected by Campbell. After he cycles it off the boards, he continues to go behind the net and his weight is on the "outside edge of his inside foot" - that being his left foot when he's making the turn.

OV, being very powerful, hits him off that edge, which (if you've ever been hit that way before) causes you to lose complete footing and crash whatever direction you've just been hit. In this case, fall awkwardly into the boards with his shoulder.

Although not the same late hit, if you recall Pronger's hit on Green last year when Green was trying to drive the net, it's a similar type of hit...which also resulted in an injury.

I'm not sure I'd suspend OV, but as some players mentioned, it's about respect for each other out there with head shots and late hits. I think this was a late hit, and not necessary.

This is a fantastic overview of the situation Peerless. It's really nice to see someone bringing so much perspective when everyone seems to be picking sides already.

I'm sure he'll get some time off, though I don't really think he should. My guess is 2-4 games. I can see both sides of the argument, however Colin has to penalize him so show that the NHL hasn't lost all of its teeth, but it will still be a gum job and not a serious bite (hockey puns intended).

As for the Briere swuipe... . Man am I tired of that discussion.

I'm a caps fan but agree with Toews - the players have to respect each other. That hit was unnecessary - it was "just a shove", but a shove near a cliff is very different from a shove in a shopping aisle and Ovie knew where he was.

Campbell skated directly into Ovie's path. Ovie clearly snowplowed to diminish his skating speed just prior to the hit. That's why it wasn't "charging". He also made contact about five or six feet prior to the boards. The only reason it is boarding is because Campbell was on his left outside edge and unable to brace for the hit. Is that all Ovie's fault? He definitely meant to push him, but it was largely reflexive because there was no way for him to avoid contact with a player skating directly into his path. I really doubt you can make a case for deliberate attempt to injure like with the goon, Cooke, who-- shoulder or not-- meant to hurt Savard bad. Colin Campbell will probably not make the decision because I believe the two Campbells are related, both from Strathroy, Ontario, I think.

All: I'm a Caps fan so we know what "side" I will ultimately come down on and I do. To me if Cambell got up, it's two minutes and we all move on and don't talk about it. - sort of like two plays yesterday in the Lightning/{Pens game, eh?

My issue now is I don't want the physical side taken out of Hockey - hits to the head rule changes are needed but will be hard enough to manage and handle without changing the basic nature of the game. I can't see nor do I think any additional changes to the rules regarding "late hits" are necessary.

As for his one, if real time I don't agree with Toews - this wasn't enve a "big hit" it was a push, and it wasn't "overly" (my words late in my opinion.

It was a clean (if late) push, not a dirty hit. But then, I'm not exactly a disinterested observer.

Honestly, Ovi is such a polarizing figure -- love him, hate him, very little in between. Perhaps only Crosby inspires more extreme reactions.

The hit was a 2-minute penalty at most... the ejection and the two-game suspension were both unwarranted, and further examples of a reactionary and inconsistent league. On the flip side, that's about the only way Ovi will rest before the playoffs, so... not so bad a punishment in the big picture.

thanks for everything you do, peerless.