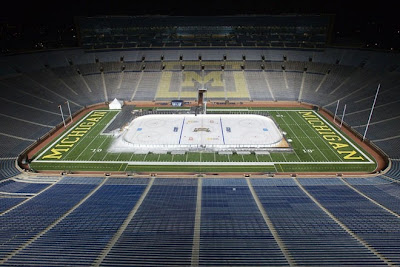 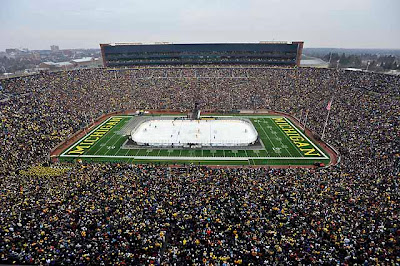 The Big Chill at The Big House.

Big in vision, big in execution, and my, what a big crowd at Michigan Stadium on Saturday. It’s hard to wrap one’s arms around the number – 113,411. That was the paid attendance, and there weren’t many empty seats in The Big House as the University of Michigan Wolverines turned back the Michigan State Spartans, 5-0, in a game that will be remembered more for the event than the outcome (except for Michigan fans, who will miss no opportunity to rub this in to the skin of Spartan fans).

We had a special interest in this one, insofar as we hold degrees from both of these fine institutions of higher learning. We remember the experience of Michigan State-Michigan at Munn Arena in East Lansing and at Yost Ice Arena in Ann Arbor. But we never experienced anything like this in either of those venues. From the time we arrived in Ann Arbor on Friday until the B-2 stealth bomber screamed low overhead at the end of the National Anthem, until the fireworks went off at the end of Saturday’s contest and through the evening, Ann Arbor was white hot with “The Big Chill.” It’s hard to put it all into a coherent narrative; it is more a collection of images…

Driving north from Toledo on Friday, flakes of snow silently preparing us for a weekend of winter fun that brought us back to those days in East Lansing and Ann Arbor.

Getting to Ann Arbor and to our hotel Friday afternoon and remembering just how much we thought, “maize…another name for ‘corn.’” Yeah, we’re still Spartan green to the core.

Saturday morning… it wasn’t that cold out. We were wondering whether the ice would hold up. And on our way to the game, it seemed more like a football Saturday – complete with tailgaters – than a hockey game. Except for folks with sticks and tennis balls instead of footballs in the parking lots.

Making our way to the stadium…maize and blue everywhere. We thought even the streets were paved blue with maize lines. Just our imagination, although they do take such things seriously in this part of the world.

Getting to the stadium more than an hour before the opening faceoff and walking through a tunnel out into the seating bowl, thinking once more – just like we had every other time we walked out into the vastness of this place – they designed it after that meteor crater in Arizona. Since you enter the seating bowl near the “top” of the stadium, it has the illusion of the bottom dropping out of the earth.

And we wondered, “where is everyone?” The stadium was almost empty. We knew parking was a problem (a couple of lots that normally might have been used were closed because of the weather and temperatures) which could delay folks, but still…this was supposed to be a sellout, right?

A half-hour before the puck drop, the teams take the ice for warm-ups. They looked all business, but we suspect they were sneaking peeks around the stadium to take things in.

Everything about this game is big… even the rink. They are using an Olympic-size rink for this game. Folks say it was to bring the action closer to the fans. We’re convinced it was a Michigan plot to give the speedier Wolverines an advantage over State.

Amazing how quickly a hundred thousand people can appear. It seemed like only minutes ago I could see the big block “M” in the stands a few sections over from where we were sitting. Now, it’s just a sea of maize and blue with the occasional oasis of green. We’re getting good natured ribbing about the State jersey we’re wearing.

The banner is taken out onto the…the what, field? The “Go Blue” banner that the Wolverine football players tap on their way out of the locker room, a tradition in these parts for almost 50 years. Michigan’s goalie leads his team out and taps the banner with his stick… nice touch.

And what’s up with the goalies? Shawn Hunwick wasn’t supposed to get this start for Michigan (Bryan Hogan was), but he’s the one leading them out. A little gamesmanship by coach Red Berenson? Turned out Hogan injured himself in pre-game, a groin injury. The first (and, as it turned out, only) casualty to the weather.

Speaking of coaches, what is MSU coach Rick Comley wearing on his head, Indiana Jones’ fedora on steroids?

The National Anthem. People are actually singing. And there might not be a more impressive sight than a B-2 bomber coming over the rise of the stadium.

At that moment, things were just about perfect. For a Spartan fan, it would be the last time that afternoon. It did not take long to figure out which team was the better one. This is not a banner year for Michigan State hockey. Having lost two of their top three scorers from last year to NHL signings, it is a team that struggles to score, even when things are going well, and they looked to be a bit discombobulated with the additional room the bigger rink provided. But this being one of the great rivalries in college hockey (no two teams have met each other more often than these two), State was making a game of it early.

In fact, they were more than making a game of it, the contest remaining scoreless through the first half of the first period. But then, the first in a series of bounces that favored the home team occurred. As the clock ticked past the 12-minute mark of the first period, Michigan’s Jon Merrill took an innocent looking one-timer from the top of the right wing circle on a power play. It looked as though Spartan goalie Drew Palmisano had the shot tracked, but the puck was deflected by a Spartan stick on the way in, redirected over Palmisano’s glove to give the Wolverines the early lead. It was the second straight goal State allowed off their own stick, having lost a 1-0 overtime decision to Ferris State in their previous game on such a goal. Turns out it would be the second straight game-winning goal allowed of that variety.

And then we remembered just how loud this place could get. And how annoying “The Victors” is.

Less than three minutes later Michigan had another one, Merrill getting his second one, this time on a nice assist from Matt Rust, who found Merrill on the door step after the Wolverines broke down the Spartan defense to create what was more or less a two-on-one in front of Palmisano. That was how the first period ended. Intermission entertainment, wishing there was snow on the ground so folks could take snowball shots at the mutant french fry mascot representing Arby’s.

The second period looked a lot like the first early on. State held Michigan to a draw through much of the first half of the period, and then the game had its moment. The Brothers Chelios – Jake and Dean – started the play, Dean sending the puck out to Jake on the left point. Jake shot the puck wide to the goalie’s right. The puck bounced hard off the end boards and back in front, where it popped into the air before dropping behind goalie Shawn Hunwick. A pile up ensued at the right post, and as the net was being pushed off its anchor, Brett Perlini jumped in and stuff the puck over the line for State. The goal was waved off by the referee, and the play went to video review. The call was upheld, and the Spartans saw what would be their best chance to make a game of it go by the boards.

Barely a minute later, Carl Hagelin ended the competitive portion of the game by stuffing a shot under Palmisano’s pads from low in the right wing faceoff circle to give Michigan a 3-0 lead. In 11 conference games coming into this game, State scored more than three goals only three times. Today would not make four.

The biggest cheer in the third period might have been when the unofficial attendance was announced – 113,411 – the largest crowd ever to see a hockey game anywhere, the largest crowd in Michigan Stadium history (including all those football games against Ohio State), and the largest on-campus crowd to attend any sporting event in NCAA history.

Michigan would score a pair of goals less than two minutes apart in that third period to provide the final score, but after that we did not detect all that many fans heading for the exits. I guess even if you were rooting for the team on the wrong side of the score, there was a “we don’t want this to end” sort of feel to it. By game’s end darkness had settled in, but the reflection of the temporary field lights off the ice provided a glow from the floor of the stadium. The fireworks that were launched into the night sky after the clock ran down emphatically announced that The Big Chill in The Big House was nothing short of a success greater than any of its authors or participants could have imagined.

We left Ann Arbor one last time early this Sunday morning for the long drive back to Virginia. It was remarkably quiet, although we thought we could still see some haze where the fireworks had been set off last night. Maybe it was just the onset of the snow that was expected to descend on southeastern Michigan today. The result of the game might not have been to our liking, but it was a weekend a hockey fan of any color – maize and blue, or green and white – will think didn’t last long enough, but that will last a lifetime.

Yeah, even if Michigan won the damn game.

Email ThisBlogThis!Share to TwitterShare to FacebookShare to Pinterest
Labels: The Big Chill at the Big House