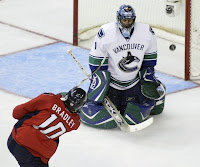 Fearless…Cheerless…you want to stop playin’ with the livestock and get back in here. We have work to do…

Matt Bradley
Last year: 7-11-18, +1, 2 GWG
Career average (per-82 games): 8-12-20, -4
Feerless’ Take: “Fearless” would be a good nickname for Bradley. He’s not going to score a lot, but what he does bring is energy, an affinity for hitting things in the sweater of the other club, and for taking things into his own hands when the need arises...

Bradley has been consistent in his three years with the Caps, generally putting up 20 points per 82 games, which is right there with his career average. The odd part of it is that he’s done it with decreasing ice time-per-game – 12:35 in his first year in Washington, 11:55 in 2006-2007, and 9:59 last year. Chalk one up for efficiency. He’s also been consistent in dealing punishment to opponents. In his first year in Washington, he had 120 hits in 74 games, in 2006-2007 he had 65 in 57 games (when he missed 21 games for a variety of injuries and personal reasons), and in 2007-2008 he had 126 in 77 games. He doesn’t have the offensive upside of some of the “plumbers” of the 1980’s squads, but he brings the same solid “lunch pail” ethic. The team must have seen something it liked, having signed him last May to a three-year, $3 million deal.
Fearless’ Take: Don’t get me wrong, cuz, but don’t you think three years at a million-per was a bit much for a guy who has a total of 95 points and is -18 in over 400 games? OK, he was tied for 74th in hits last year – that’s all very nice. He was also tied for 356th in points with the likes of wingers Jordin Tootoo, Stephane Veilleux, Trevor Letowski, and Chris Thorburn. All of them are paid less in the NHL than Bradley, except Letowski. Oh, he’s in the KHL.
The Peerless’ Take: Well, Cheerless, Bradley might be the highest paid among those you mentioned. He is also the only one of that group who finished the year on the plus side of the ledger (the others were a combined -35). And here is your fun fact…in the 18 games Bradley played after the trading deadline, he was 4-3-7, +7, and average more than two minutes above his season average of ice time. He got more work, more responsibility, and did rather well for a fourth liner. Bradley turned 30 over the summer. That almost puts him among the elder statesmen on this team. It also suggests that he’s settled into being a pro. Except for injury, he’s been a full time performer for the Caps in his three years here, performing an important role as a guy who will get under the skin of opponents, stand up for teammates, and pot the occasional goal…including when he calls his own number in the shootout.
Projected: 6-9-15, even
Posted by The Peerless at 9:40 PM