The Peerless Prognosticator is ON THE AIR!!! -- Caps vs. Lighting, New Years Day 2009

The Peerless Prognsoticator is ON THE AIR!!!

“wouldn’t you be?...I mean, what a year…we had Rock the Red, that Ovechkin thing, Bruuuu –urp- uuuuuuuuce…”

Good one…but tell me, what does the old year do on New Years Eve?

“do I really have to do this, this early in the morning?”

“OK…well, after we put the diaper on 2009 to get him ready for the ball-drop -- and isn't THAT a whole lotta laughs -- we head out on a bar crawl with all the other old years gone by.”

Aren’t some of those years, well, pretty old?

“Some of look a lot older than our years…take 2004, for example…he looks positively ancient, but then again, you saw the Caps that year…then there was the lockout to end the year…it aged him terribly.”

“not a wrinkle…the lockout ended, Ovechkin arrived…he still looks like he could be there for the ball-drop.”

So you guys had a pretty good time, I take it.

“what I remember was pretty good…but I got left with the check, since I’m the new guy.”

“yeah…well, it’s all kind of a blur…all I remember is 2000 hitting on all the women with some tired line about 'why NOT two-K, baby?'”

Well, we’ll let 2008 sleep it off…he’s earned it. And that brings us to today’s game in which the Caps host the Tampa Bay Lightning. The Lightning come into this game with an awful record, but they’ve been on something of a roll of late. They have earned points in their last four games (3-0-1) , their longest such streak this season and longest since a three game winning streak to close October and open November. Their numbers don't suggest a great team in the making, though... 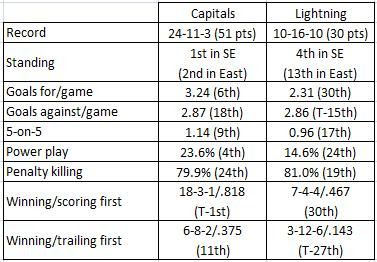 And, despite the buying frenzy over the summer that netted Tampa Bay every free agent forward in North America that wasn’t playing basketball, they’ve done with defense in these last four games. They’ve allowed only seven goals in the hockey portion of the contests (they had a Gimmick loss to Montreal in their last game this past Tuesday) and shutout the mighty Penguins in Pittsburgh (although the Pens are playing lately like a team intent on playing themselves out of a playoff berth).

The defensive performance begins with the goaltender – Mike Smith. Despite an 8-12-9 record, Smith has more than respectable numbers otherwise – a 2.42 GAA, .923 save percentage, and a pair of shutouts. Smith was not the goaltender in the Lightning’s . In fact, Smith has only faced the Caps once in his career, and that was as a member of the Dallas Stars on the last day of November 2006. It was not memorable… he allowed four goals on ten shots in 40 minutes of work in a 4-3 loss, a game perhaps more memorable for the ugly cut to his face received by Jamie Heward thanks to the skate of Mike Modano.

If Smith isn’t given the nod by coach Rick Tocchet, the Caps might get a chance to face Olaf Kolzig once more… well, no. He’s out with an “upper body” injury. That leaves the backup duty to Karri Romo, and that might be where he is best kept – he has an 0-2-1, 3.30, .903 career record against the Caps.

Actually, for a season that has been as frustrating as that which the Lightning have endured so far, there is optimism down in Florida. Witness this morning’s column by Brant James of the St. Petersburg Times…

“They were woeful from the outset. So woeful their coach was fired by mid November. They didn't earn their 30th point until the 36th game of the season.

“Recollections of the last season's Capitals should seem familiar, and be a comfort, to the Lightning as it returns to the Verizon Center to take on Washington tonight.

“The point to be taken from it: The Lightning's season isn't necessarily over.”

Well, what tools are the Lighting bringing to the 2009 portion of their season to try to repeat what the Caps accomplished last season?

Well, there are, of course, Martin St. Louis and Vincent Lecavalier – the leading scorers for the Lightning and players with a history of success against the Caps. St. Louis is 17-25-42, with three power play and two game-winning goals (not including his series winning goal in the 2003 playoffs) in 45 career games against the Caps. Lecavalier is 24-27-51, with seven power play markers and two game winners in 53 games against the Caps. However, St. Louis is on a pace for 73 points, which would be another drop in his production from his career high of 102 points two years ago (he had 83 last year). Lecavalier is on a pace for 68 points, which reflects a similar trend – he has his career high in points two years ago (108), but dropped to 92 last year. Should he finish with 68 points, it would be his lowest total since 2003-2004.

After that, things get grim quickly for the Lightning, if you’re looking at their numbers. Mark Recchi is the third leading scorer on the roster (8-14-22), but he is a -15 for the year (worst on the roster and better than only six players in the entire league). He has been on a bit of a run of late with a four game points streak that was broken in Tuesday’s game against Montreal. He’s made a career of playing the Caps, though – 46-61-107, +16 in 91 career games. Unfortunately for Tampa fans, that record was compiled primarily in sweaters of orange and black, and black and gold, not one with a Lightning bolt on it.

If there has been a pleasant surprise for Tampa Bay, it is Steve Eminger. The former Cap leads all defensemen and is sixth on the team in scoring. His 2-13-15 line already challenges his career scoring total (5-13-18 in 2005-2006 with the Caps). He’s third on the team in plus-minus (plus-4) and is fourth in ice time. Seems he’s found a home.

After suffering upper and lower body injuries that have caused him to miss nine games, and a slow start that had him with three assists in his first 14 games, Malone is now on a pace to match his career best scoring total (51 points) set with Pittsburgh last year. In his last 13 games, the left winger is 5-11-16, including a four-point night (1-3-4, +4) against Florida on December 27th. Malone has had fair success against the Caps in the past (3-7-10, +6 in 16 career games), and if he can get some crooked numbers put up on the score sheet, it could be a difficult night for the Caps.

Alex Ovechkin has abused the Lightning quite a bit in his short career (15-14-29 in 25 games). But a lot of that was done on his own. Now, he has Nicklas Backstrom setting up plays, and Backstrom is on fire. Since registering an assist against the Rangers on November 8th, the second-year center is 11-27-38 and has climbed to second on the team in scoring and into a tie with Ryan Getzlaf for ninth in the league. His overall scoring puts him on a pace to finish with 91 points, but his recent turbocharged pace is putting him on a pace, should he continue it for the rest of the season, for 107 points. Backstrom hasn’t had extraordinary success against the Lightning in his brief career (0-4-4 in nine games), but it hardly seems to matter who he’s playing against these days. He’s been deadly on the power play, with seven man-advantage goals in his last 20 games. Wind him up, watch him go.

2008 was a big step up for the Caps, and 2009 affords the young team with an opportunity to take another big step toward a Stanley Cup. Part of that is beating teams they should beat, and the Lightning is just such a team. It’ll be a good start to 2009…

Yup that's about right. Don't count Tampa out juste yet, though, for exactly the reason you pointed out. They're just crazy enough in Tampa's front office to think they've got the tools to pull off what we did last year.

Do they have the tools? Who knows? Probably not. That isn't going to stop them from trying or coming out hungry, and if we don't come out intent on kicking ass and chewing bubblegum (and forgetting the bubblegum), I'm afraid we'll get caught napping. Don't forget they shut out Pittsburgh.