Two heavyweights slug it out for 15 rounds – like Balboa and Creed trading haymakers – and the fight ends on a knockout coming on a jab to the shoulder.

That’s what it was like at TD Banknorth Garden, as Alexander Semin ended an extra-session contest between the Capitals and the Boston Bruins with a 70-foot slap shot that somehow snuck past Bruin goalie Tim Thomas. The shot that came 22 seconds into overtime gave the Caps a 4-3 overtime win and allowed the Capitals to win the season series against the B’s, 3-0-1.

It was a game that had something for everyone (ok, except a fight – there were no bouts). It had goals, outstanding saves, big hits, big performances by big players, and the weird ending…

-- Need the big players to come up big? Well, Marc Savard wasn’t even supposed to play in this game for the B’s, but he ended up getting three assists and winning a majority of the faceoffs he took. Zdeno Chara got the Bruins even in the third period with a goal coming off a bad angle shot that Caps goalie Jose Theodore frankly should have turned aside. Semin had two points for the Caps, Mike Green had a pair, and Alex Ovechkin had another goal from his left wing faceoff circle office.

-- Theodore did, however, have a number of big saves – a robbery on Patrice Bergeron by skittering from one post to the other as Bergeron was taking aim for a one timer on the short side, a stop of a Shawn Thornton attempt off a rebound. Thomas had his share, too – twice making saves on Semin as the Caps forward broke in alone after sprinting past Bruin defenders and denying breakaways by Brooks Laich and Eric Fehr.

-- Theodore didn’t get an assist on the first goal – a power play goal by Nicklas Backstrom – but it was his having the presence of mind not to freeze the puck after a David Krejci shot at the other end, moving the puck to the side boards for Alex Ovechkin to start the play the other way, that ultimately led to the goal.

-- Tomas Fleischmann ended a seven-game streak without a goal (one in his previous 17 games coming into this contest), banking one off defenseman Dennis Wideman and past Thomas. Hey, you have to stop a slump somehow. Usually, it’s an ugly goal that does it.

-- Semin had an assist to go with his game-winning goal. That makes 58 points in 44 games, and he has gone as many as two games consecutively without a point only once this season (February 18, 20 – against Colorado and Montreal).

-- Speaking of Semin, here is your fun Alexander Semin stat. With a goal and an assist, Semin is now at 58 points, good for 21st in the league. That might sound nice, but when you consider that his 44 games played is fewer than those played by the top 135 scorers in the league, it is amazing.

-- At the other end of the spectrum, Matt Bradley had an assist – his first point since January 10th against Montreal.

-- Perhaps the oddest line on the entire scoresheet belongs to the Bruins’ Michael Ryder. He allegedly played 13:40 in this game, and other than a minor penalty, what he had to show for it was…nothing. No shots attempted, no hits, no takeaways, no giveaways, no blocked shots. Nothing.

-- The teams combined for only 18 turnovers (takeaways plus giveaways)

-- The good and the bad about penalty killing…the Caps took only four minors, but three of them came in a less than eight-minute span of the third period. The Bruins scored the tying goal on the last of them.

We’ve now completed the regular season body of work for these teams, and since it is a good possibility that they will meet in the playoffs, that body of work merits a look… 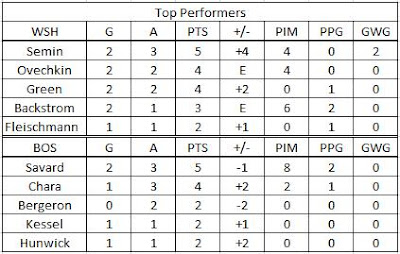 The teams have played evenly, with three games settled by one goal and the other virtually a one-goal game, the Caps securing a two-goal win with an empty netter late in the first game played between the clubs. There are perhaps 30 or so games to be played before these teams might meet in a conference final, but you get the feeling that if they do meet, it will be one helluva series. In the meantime, nicely done boys.
Posted by The Peerless at 7:32 PM