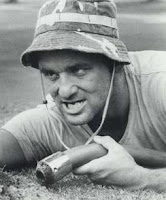 This being a special day and special circumstances, we went to visit an old friend to get his take on what the Caps need to do to snare a win and keep this series against the Rangers going another couple of games. Here are some highlights from our conversation with the esteemed sports legend and golfing commentator, Carl Spackler...

Carl, thanks for sitting down with us before game five of the Caps-Rangers series. I knew you were a legend in the golfing world, but I never knew you were such a hockey fan. You even met the Commissioner recently, didn’t you?

"Uh, yeah…I jump ship in Manhattan and make my way over to midtown, and I get in the NHL offices as a blogger."

“A blogger, you know, a windbag, a know-it-all, a blogger. So, I tell them I'm a blogger, and who do you think they let me see? The Commisioner, himself. Twelfth son of David Stern. The tailored suit, the weird smile, weaselly...striking. So, I'm in the office with him. And do you know what the Commish says? ‘Gunga galunga...gunga- gunga lagunga.’ So we finish our little talk and he's gonna stiff me. And I say, ‘Hey, Commish, hey, how about a little something, you know, for the effort, you know?’ And he says, ‘Oh, uh, there won't be any quotes for the media, but when you die, on your deathbed, you will receive total consciousness.’ So I got that goin' for me, which is nice.”

About this series, some folks think that Rangers’ goalie Henrik Lundqvist is in the players’ heads on the Caps. If you’re sitting there getting ready for the game, how do you prepare?

“I got to get into this dude's pelt and crawl around for a few days. Who's the goalie’s ally. His friends. The harmless squirrel and the friendly rabbit.”

“Yeah, or maybe just the harmless squirrel and the friendly rabbit. Goalies are weird, man.”

Do you have any visualizations of how you’d face up to playing against a Lundqvist?

How about the Rangers? What will you be thinking about them? Sean Avery in particular…

“How 'bout a nice cool drink from this water bottle, varmint. Scum. Slime. Menace to the NHL. You’re a disgrace to the varmints. Your one of the lowest members of the food chain, and you'll probably be replaced by the rat. Well, I have been pushed. It's about time somebody teaches this varmint a little lesson about morality and about what it's like to be a decent, upstanding member of a society! Come to Carl, varmint. -- I guess we're playing for keeps now. I guess the kidding around is pretty much over. I guess it's just a matter of pumping about five knuckles into your face to teach you a little bit of a lesson. Is that it? I think it is!”

Last, Carl…the Caps have a lot of young guys who for the second year are facing a 3-1 deficit, playing a tough team trying to close it out here in Washington. If you’re visualizing your performance, trying to shut all that out, what are you thinking?

"What an incredible Cinderella story! This unknown, comes out of nowhere, to lead the team to a win at Verizon Center. We’re in the final minute. He's skating out of from behind the net about 455 yards away, he's gonna hit about a 2-iron, I think. Oh, he got all of that. The crowd is standing on its feet here at The Phone Booth. The normally reserved crowd is going wild... for this young Cinderella who's come out of nowhere. He's got about 350 yards left, he's going to hit about a 5-iron, it looks like, don't you think? He's got a beautiful backswing on his slap shot... that's- oh, he got all of that one! He's gotta be pleased with that! The crowd is just on its feet here. He's a Cinderella boy. Tears in his eyes, I guess, as he skates in for this last shot. He's got about 195 yards left, and he's got a, looks like he's got about an 8-iron. This crowd has gone deadly silent... Cinderella story, out of nowhere, former beer league player, now about to be the hero. It looks like a mirac- it's in the net! It's in the net!!"

Well, thanks Carl. Hopefully, the Caps will take some of this advice…