The Peerless Prognosticator is ON THE AIR!!! -- Caps vs. Penguins, December 23rd

Well, here we are. Game 1 of what could be, before the season draws to a close, an 11-game series between the Washington Capitals and the Pittsburgh Penguins. It’s enough to give you goose bumps, and that’s without the HBO series shoved into the middle of it. The Peerless has learned that HBO settled on the “24/7” concept for the run up to the Winter Classic after considering a number of other tried and true formats. HBO was prepared to bring several series names out of retirement to serve as the theme. We have some notes from the executive meetings…

Star player shows his grittier side by working on the speed bag…of opposing player. Boris Valabik perhaps available on loan from AHL to reprise role.
*****

Follows the saga of prospect born in Massachusetts, raised in New Jersey, goes to play in Canadian juniors, but then sticks dagger into Team Canada in junior championships with overtime gold medal winning goal. Too unbelieveable?
*****

In depth look at the history of Matt Cooke, Deryk Engelland, and Eric Godard, and their unique approach to sportsmanship. Added commentary on Lady Byng Trophy chances.
*****

Subject: Band of Brothers/Coming through the Ranks

Follows Michal Neuvirth, John Carlson, Karl Alzner, Mathieu Perreault, Andrew Gordon, and Jay Beagle from their winning a Calder Cup in 2010 as teammates to their joining the Caps in the fall.
*****

Subject: Last of the Blonde Bombshells

In depth look at Jordan Staal…concept in development
*****

Follows Capital Matt Bradley in his role as a grinder and as “energy” player who will drop the gloves. Issue to be resolved – Bradley has reputation as a bleeder, could be disturbing for new viewers, although hockey fans will likely love it.
*****

Good thing we got the 24/7 series, eh? Well, there will likely be some footage from tonight’s game showing up in Episode 3 of the four-part series as the Penguins visit the Caps. And the Penguins will be coming into this game as one of the hottest teams in the league. Their having lost two straight games to end a 12-game winning streak notwithstanding (they stopped that slide with a 6-1 win over Phoenix on Monday), the Penguins have won 13 of their last 15 games (before last night’s action). And if you think it was all a product of Sidney Crosby running away with the scoring race, you’d be wrong. If anything, the Penguins have done it with defense. In those 15 games the Penguins outscored their opponents 51-27. Allowing 1.80 goals per game over almost a fifth of the season qualifies as excellent defense. Overall, the numbers look like this… 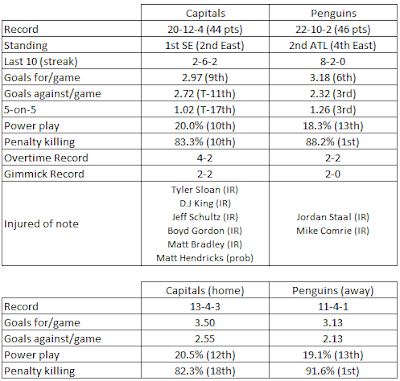 The stingy defense might be what Penguin fans were hoping for, if not expecting, when the club went out last summer and signed free agents Zbynek Michalek and Paul Martin. Each has done his part in the defensive end. In this 15-game run Martin is 2-3-5, plus-7, and he has logged more than 20 minutes of ice time in 14 of those 15 games. Meanwhile, Michalek is 0-3-3, plus-1, and has topped 20 minutes of ice time in 12 of those games. Neither is an especially productive offensive defenseman, but that role has been assumed comfortably by Kris Letang, who is second in the league in scoring among defensemen (6-23-29) and is a plus-18, also second among the league’s defensemen. If anything, though, Letang has slowed down a bit. Over his last six games he has a goal and a pair of assists (he was 1-1-2 in the Monday win over Phoenix).

Through 34 games the Penguins scored 108 goals. Sidney Crosby had a hand in 57 of them (27-30-57, points on 52.8 percent of the team’s goals). At the moment, the Hart Trophy is a one horse race, and that horse wears “87.” The question is whether he can keep up that sort of pace for another 48 games, because if he cannot, it is an open question where the scoring is going to come from. Only one other Penguin has as more than eight goals (Evgeni Malkin with 13), and no other Penguin has more than 30 points. Crosby shows no sign of slowing down, though. On the 15-game run he is 15-14-29 (he has a hand in 57 percent of the goals scored) with four multi-goal games and two hat tricks.

Malkin could be the key to providing Crosby with some scoring relief. Since he won the Art Ross Trophy as the league’s leading scorer in 2009 he has 107 points in 96 games, a very fine number, but not one that one would expect from a player who was considered at worst the second best player in the league two seasons ago. He might be lifting his game to a higher level, though. He is 5-3-8 in his last three games, including a five-point game against Phoenix on Monday.

The knock on goalie Marc-Andre Fleury has never been his talent, it has been his consistency. Even though he is a Cup-winning goalie and has a 40-win season on his resume, he has had stretches when he allows too many soft goals in too many critical situations. He started the season in much the same way. In his first 12 decisions this season he was 5-6-1, 2.95, .883. Since then, though, he is 10-1-0, 1.54, .948, and only once in those 11 decisions has he allowed more than two goals.

As folks tuning into the first installment of HBO’s 24/7 series learned last week, Dupuis skates on Sidney Crosby’s line. Frankly, 15 points in 33 games as a winger on that line is alarming. Even on this 15-game run he has not produced much (2-4-6). Dupuis is not alone; the Penguins do not have a winger with more than 20 points. That kind of production, with the implication that entirely too much of the Penguins’ fortune relies on the good fortune (not to mention good health) of Sidney Crosby is playing with fire. Guys like Dupuis have to produce more.

The story is that Laich was not answering his phone this past week in fear of hearing he had been traded. That seems highly unlikely. Guys with his pattern of improvement (21, 23, and 25 goals the last three years) with a $2.1 million cap hit might be considered a bargain. But he has struggled of late (1-3-4 in his last ten games). It would be nice if Laich could channel the player who was 2-4-6 in four games against the Pens two years ago (not the one who did not have a point in three games last year). Laich, like Dupuis for the Penguins, is not alone. He and his secondary scoring cohort – Mike Knuble, Eric Fehr, Jason Chimera – need to produce to ensure that the two game mini-streak the Caps are nurturing grows into something more.


1. First things first. The Caps and Penguins have similar goals scored records in the second period (43 and 42, respectively) and third period (36 and 31) this season. The Penguins, however, have 33 first period goals so far while the Caps have 24. What is worse, the Penguins are plus-12 in goals scored/goals allowed in the first period, the Caps are minus-9. If this pattern holds up, it will not be a pleasant evening. This will the the Penguins’ third game in four days, the last two being back-to-backs. It is the Caps who need to have that fast start and make a tired Pens team play catch up.

3. No-go for Go-Go. Sidney Crosby has 27 goals, but it is defenseman Alex Goligoski who leads the team in game winners (four). Crosby might get his goal (or maybe two), but the Caps can’t let others beat them, especially on the power play (where Goligoski has two game winners).

In the end, these are two teams that are likely to be circling one another all season, just as they have been the past two seasons. Wins and losses now are nice for bragging rights, but for both teams it is a matter of doing things the right way within their respective systems and making sure that good habits are maintained. It might turn on habits. Over the last two seasons Marc-Andre Fleury’s regular season record against Washington is 1-3-2, 4.57, .861. It would be nice to see that habit continue.

peerless
what is the best source to find out which goalie will be starting that night? this, of course, is for fantasy hockey purposes.
thanks
read all your posts and enjoy them
ray

I don't have an answer for that question. Those who read this space know that I pick the goalie incorrectly an uncomfortably regular amount of the time. But since Johnson got the start last night, that he got hurt, and that the Penguins called up their WBS Pens goalie, I'd guess it's a betting lock that Fleury gets this start.