Anatomy of a Streak

The Washington Capitals have compiled a 10-0-2 record against the Pittsburgh Penguins over the last three regular seasons. It is the longest streak of games with points earned by a team in this series since the Caps went 15-0-1 from October 1983 to November 1985. What is more, in the 12-game streak the Caps have not lost to Pittsburgh in the hockey portion of either extra time games they lost, falling as a result of Bettman’s Miracle, once in March 2009 and again last December. Some other things of interest (well, to Caps fans) about the streak…

-- The Caps have outscored the Penguins, 47-27, over the 12 games.
-- The Caps’ power play is 12/40 (30.0 percent).
-- The penalty kill is 84.2 percent (48 for 57).
-- Doing the arithmetic, the Penguins have enjoyed 17 more power play opportunities than have the Caps in the 12 games…conspiracy theorists, have a blast.
-- The Caps do have three shorthanded goals, so there is that.
-- 16 different skaters have goals for the Caps in the streak, including five players no longer with the club: Tomas Fleischmann (four), Shaone Morrisonn (one), Sergei Fedorov (one), Michael Nylander (one), and Viktor Kozlov (one).
-- 26 different players have points, including eight no longer with the team: the aforementioned five plus Brendan Morrison, Eric Belanger, and Quintin Laing.
-- Although one might have the impression that the shot totals favored Pittsburgh heavily, the shots are almost the same over the 12 games – 380 for Washington, 375 for Pittsburgh; each team had the higher number of shots on goal in six of the games.
-- The Caps have held the Penguins to three goals or fewer in 11 of the 12 games.
-- They have scored four or more in six of the games and won by a 6-3 margin in three of them.
-- The Caps’ scoring over the 12 games looks like this: 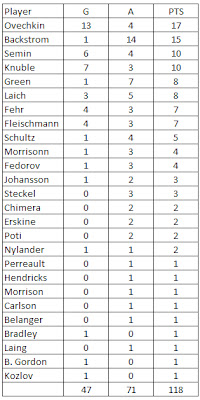 An interesting fact… of Alex Ovechkin’s 13 goals against the Penguins in this streak, only one was a game-winning goal – last night’s rocket in the 1-0 win. Of his 13 goals, six have come on the power play, and two were empty net goals.

-- Knuble continued his career as a Penguin killer – seven goals in the 12 games, and he only played in the last eight of them (he played for the Flyers in the 2008-2009 season).
-- Seven of the 43 goals Mike Knuble has scored as a Cap have come at the expense of the black and Vegas gold.
-- There is a “Mario-like” quality to his goal scoring performance. Among his seven goals he had three even-strength goals, two power play tallies, a shorthanded goal, and an empty netter. Nope…no penalty shots, but he does have a shootout goal.
-- Last night was the first time in his career as a Cap that he did not record a goal against Pittsburgh; he had single-goal performances in each of the previous seven games of this series.

The Caps have ten wins in this points-earned streak. Nine of the wins came in the hockey portion of the show (one came via The Gimmick). In the nine wins the Caps had eight different game-winning goal scorers: Sergei Fedorov, Boyd Gordon, Matt Bradley, Mike Knuble (Knuble also had the winner in the lone Caps Gimmick win), Alex Ovechkin, Brooks Laich, Eric Fehr, and Tomas Fleischmann (twice). They have spread things around.

It has not been often over the last two decades that a Caps fan can think of the rivalry with the Penguins in terms of dominance on the part of the Caps. Even if it is “only” the regular season (there being that pesky nonsense of the Penguins winning all but one playoff series between the clubs), it’s nice to look back on the last 12 games of this series and think, as a Caps fan…

…ahhhhhhhhh, sweet.
Posted by The Peerless at 12:37 PM

I write at a sports blog called Get To Our Game which often focuses on the Pens, so I'll just raise a couple points from the Pens' fan perspective.

This isn't like the NFL or college football where regular season losses keep you out of the playoffs or bowl games. It's an 82-game season and losing to one team in the regular season has zero bearing on your ability to win the championship. It's a lot different than, for example, Michigan losing to Ohio State 10 years in a row - THAT keeps you out of the championship.

Final point - I sense your sarcasm about conspiracy theorists and the +17 penalty differential for the Pens. Actually, I really hope you were being sarcastic. Teams earn penalties - they aren't given. Just because the Pens get more PP's doesn't mean they are favored by the refs. It might just mean they are tough to slow down without taking penalties.

Finesse, way to ruin a perfectly good article with the exact same hubris the Penguins have made themselves known for. What a gay. Why would you even post your site here? You know nobody in this target audience is going to waste their time staring at your pompous pixels. No matter what you say, losing 5% of your season year in and year out bothers Teams. Or are you so far removed from the very Team you "write" for to stop and listen to their view of the rivalry from their perspective? Stop wasting everyone's time.

Scoops, really appreciate the insightful rebuttal. It has made me and several people I know laugh out loud. At you, but still.

But to Peerless - love the site, keep up the good work.

The Pens do get favorable calls in this series. For example, in one of the games last year, a Pens stick snapped as he was skating up ice behind the play. The refs didn't see anything but because the Pen had a broken stick, they handed the Caps a 2 minute penalty.

Thats just the most blatent of calls but there are many others in the last 3 years.

Finesse: You do the rivalry between Washington and Pittsburgh a great disservice by saying that Pittsburgh treats these games as just regular season games. They get up for these games just like the Caps do. It's one of the most exciting rivalries in hockey right now. Try watching some hockey and you will understand.

I know lots of Penguin fans....they love beating us....in the playoffs or the regular season.

Bottom line, and Peerless pointed it out sort of: I can't get too happy about anything with the Caps (even if it's this streak against the Penguins) because of their lack of anything positive in the BB era when it comes to the ONLY THING THAT MATTERS... Playoff series victories. Sorry. I am a Caps fan, and I slightly have to agree with Finesse. The Caps treat the Penguins games like the Finals. The Pens do "get up" for games against the Caps, but I see no bearing AT ALL for streaking against a team when the last time they met in a game that actually mattered was the Game 7 collapse of two seasons ago. Sorry Peerless.

Teams don't suddenly get better in the playoffs. Or, at least, they all do, so any improvement is moot. The playoffs are all about streaks.

Red Army. I would agree with you somewhat but if you go back to the year the Pens beat us in 7 games we were 4-0-1 against them in the regular season. I would MUCH rather lose every regular season game to the Pens and beat them when it matters in the playoffs all the time.

Our streak against the Pens is nice.
So was the President's Cup last year.

But it doesn't really mean squat. Winning the Cup isn't everything, it's the only thing.

Talk to me in June.