The Washington Capitals have 25 games remaining in the regular season before the playoffs start – with the Caps or without them. This is the time of the regular season when teams that find their finishing kick are rewarded. For example, teams that go on to win a Stanley Cup use those last 25 games as a springboard to good things later in the spring. To illustrate the point, let’s take a look at the last 30 Stanley Cup winners, a group that spans several eras of hockey – the go-go 1980’s, the dead puck era of the mid-1990’s through the lockout, and the post-lockout period: 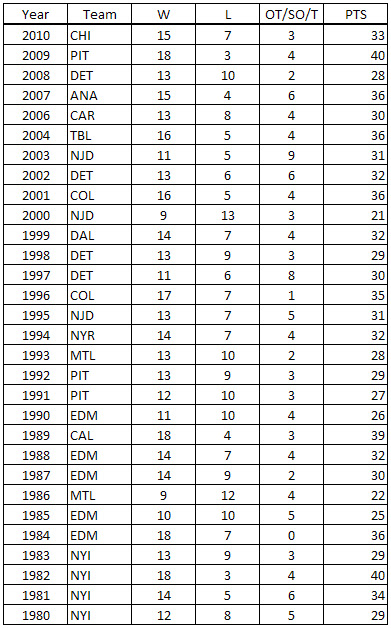 Conversely, these teams didn’t lose, or at least didn’t let standings points get away. Of the group, 23 lost fewer than ten games in regulation; eight of them lost five or fewer games.

Playing winning hockey as the season draws to a close is by no means a guarantee of post season success. Many teams might do well, but only one wins a Cup. In fact, last season the Caps played their last 25 games to a 15-3-7 record (37 points, a .740 winning percentage), and it didn’t do them much good in the post season. But teams don’t “flip a switch” going into the playoffs and win a Cup. They show themselves to be playing winning hockey well before that first puck drops in the post-season, at least those clubs that hoist the Cup in the end. If anyone thinks this team – or any team, for that matter – is going to be able to coast into the playoffs and suddenly find their stride, they have another think coming.
Posted by The Peerless at 8:57 AM