The Peerless Prognosticator is ON THE AIR!!! -- Caps at Blackhawks, March 13th

This afternoon the Washington Capitals host the Chicago Blackhawks in a battle of defender and contender for the Stanley Cup. It’s not often that the Blackhawks come to town, and it reminds us of some of the great dishes from Chicago... deep-dish pizza, Italian beef sandwiches, pizza puffs, Chicken Vesuvio.

But what in the name of Ditka have they done to hot dogs? This is what passes for the hot dog, Chicago style… 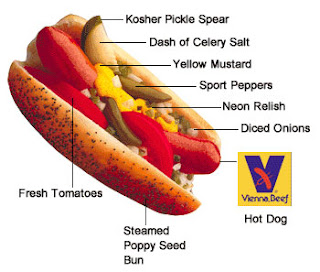 A poppy-seed bun? Neon relish? And just what is a “sport” pepper, anyway? A chili that spend 30 minutes on the treadmill? Pickles, onions, sport peppers, tomatoes, and celery salt? Maybe this isn't so much a hot dog as it is what passes for salad in Chicago. But we can agree on one thing… 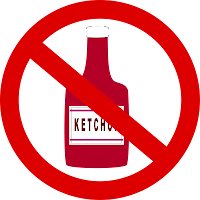 If the Washington Capitals are the hottest team in the NHL with a seven game winning streak and nine in their last ten, then this afternoon’s opponent – the Chicago Blackhawks – are right there with them. The Blackhawks have lost only twice in regulation in their last 14 games in posting a 9-2-3 record. They have, however, lost their last two contests – a 3-2 loss in Florida and a 4-3 Gimmick loss to Tampa Bay last Tuesday and Wednesday. Chicago has been off since that Wednesday game, however, and should be well rested for today’s game. Overall, their numbers compare to the Caps’ as follows: 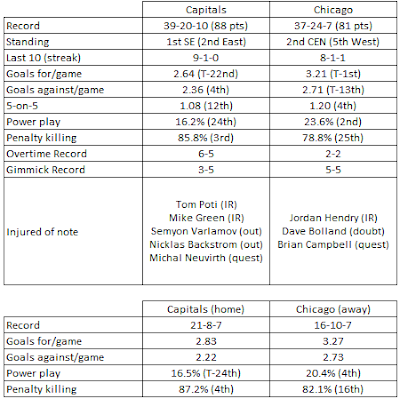 One of the engines in the Blackhawks’ recent good fortune is their Captain, Jonathan Toews. The fourth-year player is 13-22-35, plus-17 in the 28 games of the 2010 portion of the season, and he has 11 multi-point games in his last 19 contests. He has put himself squarely in the conversation of who is most deserving of the Hart Trophy as the league’s most valuable player. And, with respect to this game, Toews is a more effective player on the road this season. In 32 road games he is 13-24-37, plus-19, with five of his 13 goals being game-winners. He has been bombs-away against the Southeast Division so far this season with four goals and four assists in four games. He also has 22 shots on goal in those four games and is a plus-5. In three career games against the Caps Toews is 3-1-4.

When the Blackhawks won their Stanley Cup last season, the bill came due shortly thereafter in the form of having to move contracts that would strangle the team this season. Dustin Byfuglien, Andrew Ladd, Kris Versteeg, Brent Sopel, Colin Fraser, John Madden – six of the 14 players who dressed for 70 or more games for the Blackhawks have had to be replaced. One of the players doing the replacing is left wing Bryan Bickell. Playing in his first full NHL season (he played a total of 23 games over three seasons for Chicago), Bickell has chipped in 16 goals and 36 points in 65 games, while going a plus-9 (second among wingers to Marian Hossa). The 2004 second-round draft pick has been hot of late, too. He had a four-game scoring streak (2-3-5) broken Wednesday against Tampa Bay. If Bickell had a nickname, though, it might be “Captain Hook.” Five of his 14 minor penalties this season were of the hooking variety. Bickell has never faced the Caps in his career.

On the blue line, the Blackhawks rely a lot on the trio of Brent Seabrook, Duncan Keith, and Brian Campbell. All average more than 23 minutes a game, all have at least 25 points, all of them have two power play goals. But that is a lot of ice time to give these guys, and Campbell missed Wednesday’s game with an LBI (“lower body injury”) and will be a game-time decision for this afternoon's contest. What that means is that Chris Campoli, who arrived in a trade with Ottawa at the deadline, will have to assume a large role for the Blackhawks’ defense. Campoli was having a decent, if unspectacular, season with the Senators before being moved to Chicago (3-11-14, minus-3 for a struggling Ottawa team). With the Blackhawks he stepped in and skated more than 20 minutes a night, while contributing a couple of assists and being a plus player in his last four games (plus-5 overall). He has a bit of a chippy side to him, with a pair of fighting majors this season, as well as three cross-checking and four roughing penalties on his season’s resume. He has a goal and five assists in 18 career games against the Caps.

In the last month, Marty Turco has played a total of 38:32 in goal for the Blackhawks, all of that coming in a relief role after starter Corey Crawford allowed three goals on eight shots to start the game in a 3-2 loss to the Florida Panthers last Tuesday. He hasn’t won a game since February 1st, and that was hardly a highlight reel effort – four goals allowed in a 7-4 win over Columbus. You would not think Turco is getting the call in this one.

So that leaves Corey Crawford. Before this season Crawford appeared in a total of eight games over a three-season span. He was 1-3-1, 2.60, .914 in those games. This year is different. With Antti Niemi having been another casualty of the Chicago contract situation and left to go to San Jose, and Turco not filling the role of number one goaltender adequately, the job fell to Crawford. And he has filled it quite well. He is tied with Niemi for 13th in the league in wins (26), but has played in fewer games than any goaltender ranked above him. His 2.26 goals against average ranks fifth, and he has three shutouts. Did we mention he is a rookie? He leads all rookie goaltenders in wins, GAA, and minutes played; and he is second (to Toronto’s James Reimer) in save percentage. He had a personal eight-game winning streak broken in the loss to Florida last Tuesday, and he lost in a trick shot competition to Tampa Bay the following night. He has been quite consistent in his play, allowing more than three goals only four times in his last 33 games. Unless Turco is given the call, today will be Crawford’s first career appearance against the Capitals.

Irresistible force, meet immovable object. The Caps are third in the league in penalty killing, fourth on home ice. Patrick Sharp is third in the league in power play goals (12). But what Sharp hasn’t done lately is score power play goals. He has not had one in more than a month (February 11th at Dallas in a 4-3 Gimmick loss). The Blackhawks could use him – they are only 4-for-27 (14.8 percent) on the power play over their last 11 games, 1-for-16 in their last six.

Jason Arnott, Marco Sturm, and Dennis Wideman have played a total of 107 games against the Chicago Blackhawks in their respective careers. The rest of the skaters for the Caps have played a total of 132 combined games against the Hawks (73 of those from Scott Hannan and Jason Chimera). That is the kind of experience that is necessary at this time of year. Although the three are only a combined 1-6-7 in the six games in which they have played, they lend a sense of stability to the roster, especially Arnott with respect to the second line (and Alexander Semin in particular) and Wideman on the blue line. That contribution might explain the fact that the three are a combined plus-12 in the six games. And today, in a big game against a contender from the West on national television, it will be valuable.


1. First 20 minutes. Chicago has 74 first period goals scored this season, the Caps have 39. You would like the Caps’ chances if they were even after 20 minutes, because…

3. Opportunity. The power play returned to its old ways against Carolina, failing on two chances. It’s not so much the failure as the lack of opportunity. It was the fifth time in the last seven games that the Caps had two or fewer power play opportunities. Perhaps it was no coincidence that in the game they got five chances in that stretch they scored two goals. They are 17-8-3 when getting four or more opportunities.

In the end, this should be a good one, a contest matching contenders at the top of their games – the Blackhawks 9-1-1 in their last 11 games and the Caps 9-1-0 in their last ten. Further, each team is getting consistently effective performances from the big guys – Toews for Chicago and Alex Ovechkin for the Caps. The odd part of this game is the goaltending. Combined, Corey Crawford and Braden Holtby have 62 games of NHL experience. It might come down to which goalie shows his lack of experience least. And you know which one we think that is…

Email ThisBlogThis!Share to TwitterShare to FacebookShare to Pinterest
Labels: 2010-2011 prognostications, chicago blackhawks, that was the week that was, the peerless prognosticator