After the second full week of games, the picture, well... paints a picture 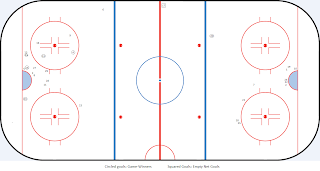 After seven games and 29 goals scored, you can see that not many of them are scored above the circles.  And of the six game-winners (the other win coming via shootout), only one could be considered of the long-range variety. It is worth noting that 19 of the 29 goals have been scored below the dots.  The Caps have been going to the net, and it has paid dividends.  It goes to show that there really isn't much of a secret to offensive success in the NHL.  Goalies being what they are, if you shoot from distance, you are going to be disappointed.  But get in close, and the chances for success increase substantially.  Seven wins in seven tries is testimony to that.
Posted by The Peerless at 11:01 PM