The Peerless Prognosticator is ON THE AIR!!! -- Game 2, Lightning at Capitals

New year, clean slate. And the first chalk marks on that slate will be made tonight at Verizon Center as the teams renew their rivalry. Not that it matters a great deal, for if there is a difference between the regular season and playoffs, perhaps nowhere is it more stark than in the rivalry between the Caps and Lightning. The taste of that sweep no doubt will linger in the mouths of the Caps and their fans until they meet again in games played in the spring, but this will have to do for now.

And in regular season games, the Caps have owned the Lightning in the Boudreau era. Since Bruce Boudreau stepped behind the Caps’ bench, Washington is 19-3-1 against Tampa Bay, including a record of 4-1-1 last season.  Here is how the teams fared last season... 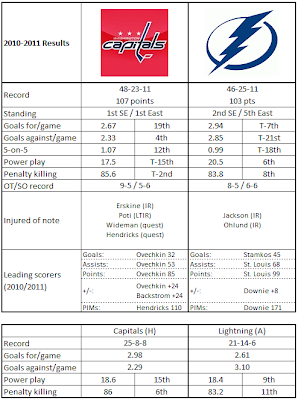 (click for larger pic)
But the Lighting own an 8-2 record in games and a 2-0 record in series against the Capitals in the post-season.  Caps fans probably remember the latter much more than the former.  But on to tonight's matchup.

A Familiar, If Haunting Face…

Those losses last season to Tampa Bay – in regulation and overtime – speak to a change in the Lightning that seems to have been made precisely with the Capitals in mind. On New Year’s Day, while the Caps were visiting the Pittsburgh Penguins in the Winter Classic, the Lightning were finalizing a trade with the New York Islanders that brought goaltender Dwayne Roloson to Tampa in exchange for defenseman Ty Wishart. Three days later, Roloson shut out the Caps, 1-0, in overtime. Eight days after that, he shut out the Caps again. And then, after he allowed four goals in a 5-2 loss on February 4th, he held the Caps to one goal on 30 shots in a 2-1 shootout loss in the season series finale.

Roloson changed the direction of the season series and the rivalry in his four appearances with the Lightning against the Caps last season. His 2-1-1 record was respectable enough, but it was his 1.22 goals against average and his .959 save percentage, with two shutouts, that provided the Lightning with the antidote to the Caps’ offense. He numbers weren’t quite as impressive in the playoffs – a 2.44 GAA and .925 save percentage against the Caps -- but he allowed only two third period goals in the four game Lightning sweep. If there is a “Cap killer” among goaltenders in the NHL, Roloson stands at the head of the class with an 8-5-4 win-loss record, but a 2.11 GAA, .923 save percentage, and four shutouts in 17 career appearances against Washington.

It has been feast or famine in two games for the Lightning, a 5-1 win in the season opener and a 4-1 loss to Boston on Saturday. Of particular concern to the Caps is the fact that the 5-1 win over Carolina in the season opener featured a 32 save effort by Roloson (he did not play in the 4-1 loss to Boston). The Lightning have had the benefit of six goals from five different players – Martin St. Louis the only one with two – and points from 12 different players.

You might expect St. Louis and Vincent Lecavalier to be featured prominently on the scoring rankings for the Lightning, and there are St. Louis, with two goals and an assist in two games, and Lecavalier, with a game-winning goal and an assist at the top of the list.

You might also expect Steven Stamkos to be right there with them, and he does have two assists, but he hasn’t found the back of the net on any of his seven shots in the Lightning’s first two games. It isn’t good news for Caps fans, either. In his first season Stamkos went his first eight games without a goal before getting a pair in Game 9. The following year, he went two games without a goal before scoring a pair in Game 3. Last year, it was a pair in the Tampa Bay season opener. Pairs to open the bidding is his habit. Stamkos is 8-4-12, minus-10 in 18 career regular season games against the Caps. He has four power play goals among the eight tallies, but he has no game-winners among them.

Since posting career highs in goals (27) and points (51) with Pittsburgh in 2007-2008, Malone has seen his numbers dip with the Lightning. In three years with Tampa Bay, his games played dropped from 77 in his last year in Pittsburgh to 70, to 69, then to 54 last year; his goals drop from 27 to 26 to 21 to 14 last year, and his points drop from 51 in that last year with the Penguins to 38 last season. He has received a modest amount of ice time in two games so far (averaging about 14 minutes), but he is making good use of it with a goal and an assist. In fact, he will come into this game having scored goals in four of his last five regular season games (he finished 2010-2011 with a goal in each of his last three games). He also had two of his three playoff goals in the four-game sweep of the Caps last spring. He has scored six goals in his career against the Caps – two on the power play, two shorthanded, and two at even strength.

The newcomer gets his first start for the Caps against a familiar foe. Vokoun has appeared in 23 career games against the Lightning, but might have had his best run of games last year against Tampa Bay. In three games he was 2-0-1, 1.26, .954 with one shutout. Vokoun had a GAA lower than that against only one other team he faced more than once last year, and that happens to be the one he is playing for now (0.99 against the Caps).

1. Don’t make it special. Here is a number to chew on – 0.99. Last season that was the 5-on-5 goals ratio of both the Tampa Bay Lightning and the Carolina Hurricanes. One advanced to a conference final in the playoffs, the other sat out the dance entirely. But the Lightning were a top-ten team on both sides of special teams, sixth on the power play, eighth in penalty killing. The Lightning shut down the Caps’ power play quite effectively last spring, killing 17 of 19 shorthanded situations (89.5 percent).

2. Stymie Steven. Last season Steven Stamkos had only one goal in six games in the regular season, and the Caps were 4-1-1. He had two in four games in the playoffs, and the Caps lost all four games. He can score goals in bunches – he had four streaks of at least three consecutive games with a goal last year and eight multi-goal games last season. He also had 36 of his 45 goals in wins. Keeping him from lighting the lamp is essential.

3. Start up the Vokeswagon Bus. Tomas Vokoun did not get the opening night start, but he probably maintains an advantage over Michal Neuvirth in the latest edition of Goalie Sweepstakes. His value is in what he does in the spring, but getting off to a solid start is the kind of thing that only adds to the confidence his teammates have in front of him. He was 4-4-0, 2.37, .921 in October last season, but he was 2-7-1, 3.28, .912 in October the previous season. He is not unfamiliar with slow starts.

It is not a revenge game. You don’t get back at someone for eating your steak dinner by stealing their bag of potato chips. This is another regular season game, important because it is a division opponent and a game on home ice – the kind of situation the Caps need to take advantage of to take care of divisional business. They can do that by imposing their game on the Lightning, being patient enough to defeat a 1-3-1 defense and using their speed across their forward lines to take advantage of a large, but somewhat plodding blueline corps. And just how long can this Roloson guy keep playing well in goal, anyway? Tonight, not well enough.