Not so young anymore 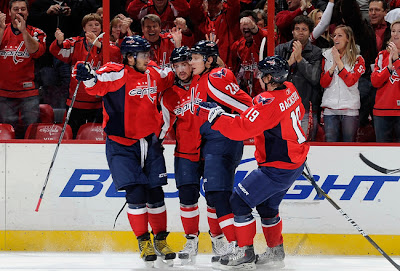 On October 6, 2007, Alex Ovechkin, Alexander Semin, Nicklas Backstrom, and Mike Green took the ice together for the first time as Washington Capitals. It was not an especially auspicious entrance. Ovechkin did score the game-winning goal, and Backstrom assisted on an insurance goal by Milan Jurcina in a 2-0 win over the Carolina Hurricanes in the Caps’ home opener of the 2007-2008 season.  But it was not an emphatic statement.

You could say it wasn’t an especially impressive first six weeks or so for the foursome, either. As a group they accounted for 19 goals scored and were a combined minus-15 through the Caps’ first 21 games. The last of those games was a grisly 5-1 loss to the Atlanta Thrashers, a game in which Ovechkin recorded his 14th goal of the season to open the scoring, only to have the Thrashers roar back with five unanswered scores. That game was the last straw that broke the back of Glen Hanlon’s tenure as head coach of the Capitals.

Enter Bruce Boudreau. The button-down, three-piece suit look of the Caps’ offense gave way to a tie-dyed, bell-bottom look of freedom. In their first 21 games after the coaching change, the foursome recorded 38 goals and was a plus-9. The “Young Guns” were born.

In that first season the Young Guns finished with a combined total 123 goals, largely fueled by Ovechkin’s historic 65 goals, a record for a left-winger, and were a plus-29. Although the Caps would fall in seven games to the Philadelphia Flyers in the first round of the playoffs, the Young Guns recorded 14 of the 20 goals the Caps scored in that seven-game series. Things looked mighty bright for a team that had come so far just to qualify for the playoffs. These guys were young, talented, and with nothing but upside in front of them. Folks would be talking of the possibility, not of “a” Stanley Cup, but of “Cups”…plural, in their future.

It is November 2011. The Caps have not yet won a Stanley Cup. They have not yet played in a final for one. They have not yet played in a Conference final. They have two playoff series wins – both against the New York Rangers – since those heady days of 2007-2008. And the Young Guns? Last season they finished with a combined total of 86 goals and finished plus-76 (score one for improved two-way play). In the playoffs they finished with a total of 10 of the 23 goals the Caps scored in nine games. They were swept out in the second round, another season with the promise revealed in that first year together unfulfilled.

At the moment this foursome is on a pace to record 92 goals and finish a minus-29, not quite what we were expecting when we scribbled a series of pieces about these players a couple of months ago. Only Backstrom is younger than 26; all of them have more than 350 games of NHL regular season and more than 35 games of post-season experience on their respective resumes. These are just numbers, but not the numbers one expects from players who were supposed to grow into dominating roles for an elite Stanley Cup contender. In some respects they have marked time; in others regressed. But more than the numbers, it is the constant beat of disappointment in outcomes.

The Caps have improved upon their regular season records since that first year of the Young Guns, including among them a season in which they won a President’s Trophy and set a record for a non-original six team for standings points in a season. But how much of that improvement has come from the Young Guns, and how much has come from the manner in which Caps management – particular George McPhee – has painstakingly tried to build the parts around that Young Gun core to give the Caps the depth of talent they need to weather the grueling march that is an NHL season? And we are still left with those playoff disappointments that have the look of opportunities squandered.

It has always been our contention that Alex Ovechkin was the easy part of this build. He fell into Washington’s lap, the chance of a ping-pong ball. The matter of building a champion was always going to be in what came after – building a core around Ovechkin, providing sufficient depth in role players to complement the skill and style of that core, finding the talent behind the bench to get the most out of all those parts.

One can opine about the moves George McPhee might or might not have made in terms of personnel, but the fact is that this team is the best group – on paper – ever assembled by this franchise.

One can ponder whether Bruce Boudreau is the right guy to get the most out of this group, but the fact is that Boudreau has won 61 percent of the 324 NHL regular season games he has coached (that wins, not games with points earned), and he has won championships or coached in championship finals at every level of his professional coaching career before ascending to the NHL with the Caps.

One can think about whether this new group of support players is the key to unlocking the door to a Stanley Cup, but the fact is that this group – Joel Ward, Jeff Halpern, Tomas Vokoun, and Troy Brouwer (yes, Roman Hamrlik is having his problems) – is an upgrade over every player occupying a similar roster spot last season.

McPhee might not have found the magic formula for the roster, but he has done his job in assembling the parts to make this a formidable lineup. Boudreau might have his shortcomings at this level of coaching, but his history shows he knows the game and has been a winner. The new guys and the grinders like Matt Hendricks, Brooks Laich, and Jason Chimera are not going to be guys who will give an honest effort just about every night, but they can’t be the best players on the ice with any frequency. There are questions and concerns about each of these actors, but for the most part they have done their jobs and are continuing to do them.

The Young Guns need to do theirs. McPhee, Boudreau, and the other guys in the locker room cannot do it for them. There are still 65 games to sort these things out, to prepare for the post season and its unique challenges. But if they do not do their jobs, there is no Stanley Cup in this team’s future.


Photo: Greg Fiume/Getty Images
Posted by The Peerless at 7:44 AM