It was a light week, game-wise, with only two contests on the schedule, but it was chock full of twists and turns.  And when it was over for the Washington Capitals, they were worse off than when they started the week, despite jumping a spot in the standings.  They started the week five points out of a playoff spot and finished it six points behind. 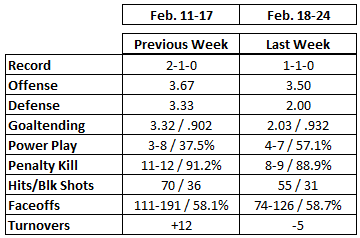 Things got better from there, though.  In the second period, which has been a problem for the Caps this season, Washington outscored New Jersey, 3-2, leaving the Caps either ahead (in Game 1) or tied (in Game 2) at the second intermission.  Against a team that squeezes the opponent and the clock over 60 minutes, neither was a bad outcome.  It denied the Devils the luxury of falling back into a prevent defense.

What the Caps did in Game 2 that they could not in Game 1 was close the deal.  They scored four goals on 10 shots over a 16:46 span of the third period of Game 2, three of them on special teams (two power play goals and a shorthanded goal to go with an even-strength score).  Of course, the problem in Game 1 was not so much offense as much as it was quick-stepping to the penalty box, which brings us to…

Game 2 was a different story.  The Caps allowed the Devils only 17 even strength shots for the game and only three of those by the trio of Ilya Kovalchuk (2), Patrik Elias (1), and David Clarkson (0), who came into the game with a combined 21 goals of the total of 45 scored by the Devils.  Kovalchuk scored on one of his even strength shots, tying the game in the second period on a defensive breakdown by the Caps, but otherwise this trio was not heard from at 5-on-5.  It was a much better effort.

It was Braden Holtby’s week, and he had a fine one.  He stopped 45 of 47 shots at even strength (.957 save percentage), and even his save percentage on the penalty kill (.909) was excellent (it is a small population of saves but the percentage is exceeded only by five goalies who have appeared in at least five games).  By period he was sturdy, going 18-for-18 in the first period and 20-for-22 in the third period of the two games.  Even the 17-for-19 record in the second periods this week was not bad (.895), in the context of his overall season save percentage entering the week (.888).  He gave the Caps a chance to win Game 1 of the week (before the parade to the penalty box) and kept the Caps engaged with the Devils until the power play allowed the Caps to shake New Jersey off in the final frame.

If you go 50 percent for a game, it is a good game.  If you go better than 50 percent for the week, you are on a run.  If you go 50 percent on the power play over 25 periods of hockey – more than eight games – you are pretty good.  The Caps finished the week with all of those statements being true, going 2-for-4 in Game 1 of the week, 4-for-7 for the week as a whole, and 12-for-24 over their last 25 periods of hockey as the week came to a close.

There is no clearer indicator of wins and losses for the Caps than their performance on the penalty kill.  Coming into the week they were 1-7-1 when facing more than three shorthanded situations, 4-2-0 when they faced three or fewer.  They were 0-8-1 when allowing a power play goal, 5-1-0 when they did not.  And sure enough, the Caps lost the game in which they faced more than three power plays; they lost the game in which they allowed a power play goal.  They won the game in which they were perfect on the penalty kill; they won having allowed only three power play opportunities in that game.  Having to kill five power plays in the third period did them in, in Game 1.  The Caps simply spent too much time (almost eight minutes in all, including 2:28 in 3-on-5 time) killing penalties to develop any rhythm at the other end of the ice, and it provided New Jersey with too many opportunities for what would eventually be a tie-breaking goal in a 2-2 game.

Going into the week’s play the Caps were averaging only 11 hits a game at home.  They more than doubled that in two games this week, averaging 27.5 a game.  Alex Ovechkin got his (nine in two games), but Matt Hendricks got his, too (eight in an average of 27:40 of total ice time).  But the number that might be most (or in a way, least) significant in the hits department  is “5.”  The Caps had five players with at least four hits in Thursday’s game… and lost.

The Caps won all three zones for the week.  They were especially efficient in the defensive end, going 26-for-43 (60.5 percent).  It enabled the club to climb over 50 percent for the season.  The surprise was not that Mike Ribeiro and Nicklas Backstrom went 11-20 in the offensive end, or even that Backstrom and Jay Beagle went a combined 16-for-23 in the defensive end.  It was probably that Mathieu Perreault continued his improvement in the circle, going 12-for-19 (63.2 percent) to finish the week at 56.1 percent for the season (third on the team).  He gets some measure of protection in this regard (10 of his 19 draws came in the neutral zone), but possession is possession, and it is better to have it than not.

The 23 giveaways stood out this week, especially since New Jersey was charged with only 11 combined for the two games.  But there were only eight giveaways by defensemen, perhaps a reason why the Devils did not have a lot of opportunities in the two games this week.

It was a nice finish to the week, especially getting the Captain untracked (a hat trick and four points in Game 2 for Alex Ovechkin), but that is not what the Caps need now.  They need “nice weeks” – plural.  They have one winning week in their first five, and the Caps sill have only one streak of consecutive wins this season (the three game streak from February 9-14).  They leave the Devils – the only team in the top eight the Caps have defeated this season – behind to take on three teams this coming week that are not among the league’s elite.  Of this week's opponents, only Carolina is in the top-eight, but as a group the Hurricanes, the Jets, and the Flyers went 7-5-0 this past week (Winnipeg and Philadelphia each went 3-1-0).  The Caps can either use their “nice finish” of the week as a springboard to a run of success, or they can lose contact altogether with the top-eight…if they haven’t already.

Email ThisBlogThis!Share to TwitterShare to FacebookShare to Pinterest
Labels: 2012-2013 nhl season, NHL, that was the week that was, the peerless prognosticator, Washington Capitals