The Peerless Prognosticator is ON THE AIR!!! -- Game 35: Capitals at Flyers, March 31st

The Washington Capitals, fresh off their thrilling 4-3 skills competition win over the Buffalo Sabres in upstate New York, head down to south Philadelphia to visit the rugged Flyers in an early evening…

What, you think the Flyers lack a certain edge?

“Cousin, have you been reading the papers?”

I like to think I keep up with current events.

“Well, geez, cuz, even I can see that the Flyers have lost eight of their last 11 games.  And, they have only 23 goals scored in those 11 games.”

There is that, Fearless.

The Flyers are in the midst of a late-season swoon, going 3-6-2 over their last 11 games, getting outscored by a 35-23 margin.  They have not been able to string together consecutive wins since they beat Washington and Ottawa more than a month ago.  And what it means is that even with their 3-1 win over the Boston Bruins on Saturday afternoon, the Flyers are in 14th place in the Eastern Conference.

Offensively over those 11 games, it has not been a case of being bad as much as it has been being just not good enough.  Jakub Voracek is 5-5-10 over those 11 games and can be said to be carrying at least a fair share of the scoring load.  However, Claude Giroux, of whom more might have been expected so far, has three goals in those last 11 games.  Good, but not quite what the Flyers need.  Ditto for Scott Hartnell.  Having played in only 18 games as a result of suffering a broken foot earlier in the season, Hartnell has three goals over the Flyers’ last 11 games.  For a guy who had a career-high 37 goals last year, it is not bad, just not good enough.

Here is what the Flyers are not getting offensively – any offense from their defensemen.  Only one of the 23 goals scored by the Flyers over the last 11 games has come from a blueliner, that coming from Kimmo Timonen back on March 7th in a 5-4 loss to Pittsburgh.  It also happens to be the last time the Flyers scored more than three goals in a game (the streak with three or fewer now at nine games).  In fact, that goal by Timonen is the only goal by a Flyer defenseman over Philadelphia’s last 15 games.

Ilya Bryzgalov has appeared in goal in each of the 11 games in this 3-6-2 slide.  His record of 3-5-2 over that span (Brian Boucher has the other decision) is consistent with a 3.13 goals against average and a .892 save percentage.  It is not as if this record is all that different from his season marks.  He is another of those “second page” goalies in the NHL.com statistical rankings – 35th of 48 goalies in goals against average (2.77) and 36th in save percentage (.902).

These are not your father’s Flyers.  And here is how they compare to the Caps overall this season… 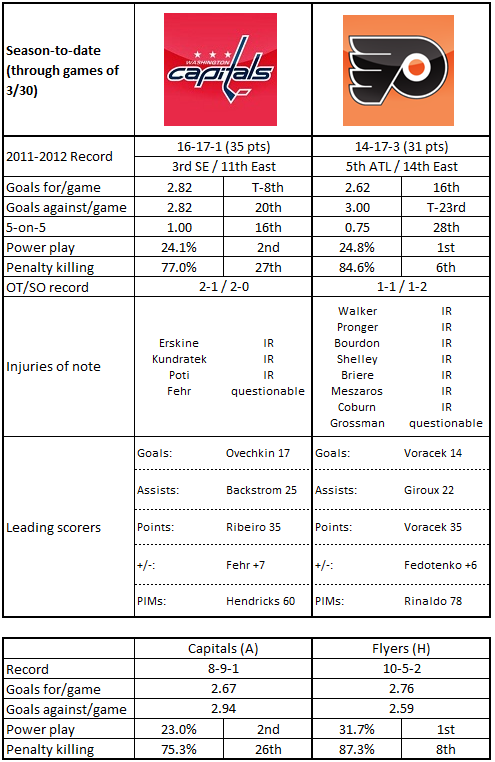 1.  In one sense, the lack of scoring from the Philadelphia defense and the leaky defense generally should be of little surprise.  Of the eight players listed in the tsn.ca injury listings (the source for the table above), six are defensemen, and five of them are on injured reserve.

2. Of the 28 players to dress for the Flyers this season, only three have “plus” totals: Ruslan Fedotenko (plus-6), Max Talbot (plus-1), and Tye McGinn (plus-1); and McGinn has played in only 17 games.  On the other hand, 19 players are in minus territory, and five of them are minus-10 or worse.

3.  Think the “sophomore slump” is a myth?  Well, perhaps sometimes, but in the case of Sean Couturier it would seem to apply.  Last season Couturier was 13-14-27, plus-18 in 77 games.  Through 32 games this season the sophomore is 2-6-8, minus-13 and has the 15th highest number of goals scored against among forwards while on ice.

5.  Mike Knuble has a third of the Flyers’ goals over the last two games (two of six).  With four goals in 20 games this season, he is in striking distance of matching his total with the Caps last season (six in 72 games).

1.  Nicklas Backstrom has taken over the team lead in assists for the Capitals (25).  He has six helpers in his last seven games.

4.  Jason Chimera recorded two shots on goal (and one expletive) against Buffalo on Saturday. That broke a string of three games in which he did not record a shot on goal, which happened to be his longest run of games without a shot on goal since he went four games without one from March 28-April 3, 2010.

5.  Troy Brouwer’s shorthanded goal on Saturday night was his first as a Capital and his first since November 25, 2009, when he scored for the Chicago Blackhawks in a 7-2 win over the San Jose Sharks.

Claude Giroux has come alive of late, going 2-4-6 in his last five games.  He has been winning faceoffs – 50 percent or better in nine of his last ten games.  He has been logging big minutes, topping 20 minutes of ice time in 17 of his last 21 games without consecutive games under 20 minutes.  And yet, the Flyers are struggling.  With as many injuries as the Flyers have had to contend with, Giroux is going to have to find another gear in his game if the Flyers are going to make a chase for the playoffs. He had a goal and an assist in a 4-1 win over the Caps on February 27th and is 7-3-10, minus-2, in 15 career games against Washington.

No one was more excited on the Washington bench after Saturday night’s win over Buffalo than Mathieu Perreault.  Now, it is time to apply that enthusiasm to the ice.  Actually, that enthusiasm is there, but the results have not been lately.  Since he had a three-goals-in-four-games stretch earlier this month, he is without a goal in his last six games and has only seven shots on goal in those games.  Secondary scoring is important to the Caps as they start their stretch run, and Perreault is going to have to be a part of that.  He is 1-1-2, minus-1 in seven career games against the Flyers.

1.  Storm the wall.  It was rather noticeable in the win over the Sabres that the Caps were not winning a lot of battles along the wall.  Philadelphia will be even stiffer competition in that area of the rink.  The Caps cannot play just between the faceoff dots.  They will have to give as good as they get along the boards.

3.  Buzz Bryz.  If Ilya Bryzgalov starts this game and has a save percentage below .900, the Flyers have almost no chance of winning.  Bryzgalov has failed to hit the .900 save percentage mark in 13 appearances this season.  The Flyers’ record in those games is 1-12-0.

In the end, one is good, but two is better.  The Caps got off to a good start on this three-game road trip with their come-from-behind win over Buffalo on Saturday.  They will need to take it up a notch against a club that is still formidable in its own building (10-5-2 at Wells Fargo Center).  A win in this one, and the Caps could find themselves in ninth place, tied with the eighth-place New York Rangers in standings points (the Rangers would hold a lead based on fewer games played).  That would set up perhaps the season’s most important game for the Caps on Tuesday against Carolina.  But first things first.  There are Flyers to bring to earth.