Washington Capitals -- That Was The Week That Was: Week 6

A winning week.  A pair of wins against Southeast Division teams and a loss to a non-divisional opponent.  It is part of a pattern on which the Caps are going to have to improve, but for the moment, a winning week is a winning week. 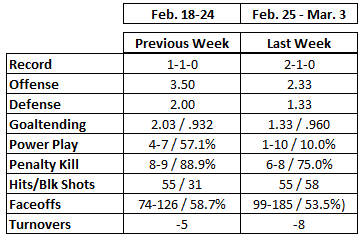 The 2-1-0 week was the second winning week in the last three and extended the Caps' non-losing streak to three weeks running (5-3-0 overall).  When the Caps beat Carolina and Winnipeg this week, it extended their winning streak against Southeast Division teams to five games and improved their record against their divisional opponents to 5-2-0.  That is the good news.  The bad news is that with their loss to Philadelphia on Wednesday, the Caps slipped to 3-9-1 against opponents outside the Southeast Division.

The good thing about the week is that seven different Caps had goals.  The bad thing is that seven different Caps had one goal.  The “top line” (a term that really defies description these days with the revolving door at left wing) of Mike Ribeiro, Alex Ovechkin, and Matt Hendricks (this week's contestant on the left side) had two goals.  Ovechkin had neither of them.  The defense had two goals this week; Mike Green had neither of them.  John Erskine, who had one of the goals for the defense, had a two-point week, ending a streak of eight games without a point.  Something of a strange week.  If there was a good takeaway from the week, Nicklas Backstrom had a three-point week (1-2-3, plus-2), and he is now 1-8-9, even, over his past eight games.

100 is a nice round number.  It happens also to be the number of shots on goal the Caps allowed this week.  Not so nice.  It contributed to a week in which the Caps were out-Fenwicked, 143-118.  That is a lot of offense being directed at Capital goaltenders.  First and third periods were troublesome; the Caps were outshot in the first and last frame by a combined, 37-31 and 39-24, respectively.  They might have made a better week of it, results-wise, had they not come out so flat against Philadelphia in the middle game of the week.  The Flyers scored on their second and fifth shots of the game (the second goal coming on a power play), and the Caps never threatened after that in a 4-1 loss.

Braden Holtby had, on balance, a very nice week.  He was 2-1-0, 1.55, .954, with two shutouts.  That’s on balance.  In the middle game he allowed four goals on 18 shots in less than 35 minutes of play.  But there were those two shutouts.  More impressive still, he recorded those shutouts facing a total of 68 shots on goal, the highest shot totals he faced in any of his six career shutouts.

Oh, and let’s not forget Philipp Grubauer, who appeared in his first NHL game in relief of Holtby in the loss to Philadelphia.  He saved all 14 shots he faced in 25:05.  In a strange way it resembled Holtby’s first NHL appearance, one in which he got the win by stopping all four shots he faced in 10:09 of ice time in a 5-3 win in relief over Boston in November 2010.

Call it “regressing to the mean” if you like, but this week was a downer for the power play.  The Caps failed to convert on their last eight opportunities in a 1-for-10 week.  The Caps could manage only seven shots in those eight missed opportunities.  Alex Ovechkin managed only three of those shots, all in the 4-1 loss to Philadelphia.  In going o-fer for the last two games of the week, the Caps went consecutive games without a power play goal for the first time this season.

The Caps were perfect against the Southeast teams they faced (5-for-5 against Carolina and Winnipeg) and not so against the other team (1-for-3 against Philadelphia).  It is part of an emerging pattern.  For the season the Caps have killed 80.8 percent of the shorthanded situations they faced against Southeast Division teams.  They have a 75.0 percent penalty kill against everyone else in the East.  Recently the disparity is more pronounced.  Over their last five games against Southeast teams the Caps are a perfect 14-for-14.  But in their last five games against opponents outside the division the Caps are killing penalties at a 66.7 percent rate (14-for-21).

This week’s takeaway is the fact that the Caps blocked almost 30 percent of the shot attempts they allowed.  It might not be surprising that John Carlson led the week with nine blocked shots, or that John Erskine had eight.  But Mike Ribeiro had six, five of them in the 3-0 shutout of Carolina to start the week.

The Caps keep climbing the rankings in this category.  They won the week and won two of three games in the circle, but their performance was not uniform in all three zones.  The Caps were fine in the defensive end, winning 30 of 53 draws for the week (56.6 percent), but they struggled a bit in the offensive end, going 26-for-55 (47.3 percent).  One of the odder numbers of the week was “1.”  That was the number of offensive zone draws taken by Mike Ribeiro in the 4-1 loss to Philadelphia, that in a game in which he was otherwise 7-for-10 in the other two zones.

The Caps lost the week, and they lost each game in the turnover matchup.  It did not seem to matter much if the Caps gave the puck away (22 giveaways against) or had it taken from them (27 takeaways against), but turning the puck over a touch over 16 times a game (arbitrariness of the measures notwithstanding) is something to work on.

With 28 games left, there are two ways to look at how this season might unfold.  The worst case scenario is this. The Caps are 5-2-0 against Southeast Division teams, 3-9-1 against everyone else.  If they earn points against opponents in these last 28 games in proportional fashion, they will earn another 25 standings points, finishing with 42 points.  That will not enable them to reach the playoffs.  That is lottery pick territory.

On the other hand, in the best case scenario, if they finish their last 28 games with points earned proportional to what they accomplished over their past nine games (6-3-0 for 12 points), they will finish 54 points.  That would probably put them right on the border line of playoff eligibility.  But here is the tough wrinkle thrown into that mix.  Between March 9th and April 7th – a period of 17 games – the Caps will play five back-to-back sets. None of them include both games being played at Verizon Center. In fact, seven of the ten games overall will be played on the road (including a pair in Winnipeg).

Realistically, though, the Caps’ season really comes down to the 16-game stretch that starts on Tuesday against the Boston Bruins.  That is how many games remain for the Caps until the trading deadline on April 3rd.  Six of those games are against Southeast Division teams; the other ten against teams outside the friendly confines of the Southeast.  Unless the Caps find a way to start beating non-divisional rivals with some regularity, their season is going to be pretty much over three weeks before the schedule says it is.

Email ThisBlogThis!Share to TwitterShare to FacebookShare to Pinterest
Labels: 2012-2013 nhl season, NHL, that was the week that was, the peerless prognosticator, Washington Capitals