Once more, we take a look at the week that was.  Week 1 might be thought of as a “week-plus,” since we are covering the first full week plus the season opener on October 10th.  It was a good week for the Caps, despite having a stinker thrown into the middle of the week. 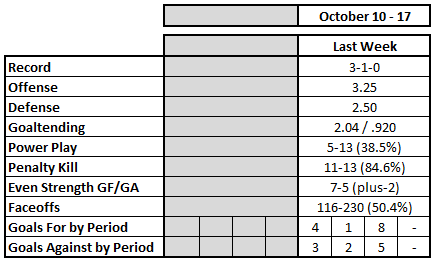 The 3-1-0 start is the best four-game start for the Capitals since they ran off seven straight wins to open the 2011-2012 season.  While those are six standings points in the bank, the news was not entirely positive.  The problem here is strength of competition.  In the three wins, the Caps defeated teams that to date have a combined record of 4-6-1 in games apart from those played against the Caps (and yes, that does include the defending Stanley Cup champion Chicago Blackhawks).  In their lone game against a team with a superior record – the San Jose Sharks – the Caps came up short.  No doubt a part of that was having both Nicklas Backstrom (injury) and Alex Ovechkin (team suspension) out, but it was a sluggish effort.  They will be tested in Week 2 as they take their act to the Canadian prairie for three games.

There were 14 different players recording points for the Caps in Week 1, led by defenseman John Carlson (2-3-5).  Carlson finished the week tied for third in points among league defensemen and tied for first in goals.  Alex Ovechkin picked up where he left off, well, over his career to date.  He recorded goals in each of the three games in which his alarm clock was set forthe correct time.  While Ovechkin leads the team in goals (3), he has not yet taken over the team lead in shots on goal.  That spot would belong to T.J. Oshie who, after a slow start (no points in his first two games), put up a pair of 1-1-2 efforts and finished the week with 16 shots on goal.  Then there was Nicklas Backstrom.  Held out the lineup for the first three games, Backstrom returned to the lineup on Saturday against the Carolina Hurricanes.  He had a goal and two assists for his 49th career game with three or more points, third highest career total in team history.

The issue for the Caps coming into the season on the blueline was how well the third pair would play, whether or not they would be a liability.  It did not take long for the Caps to shake things up back there.  Nate Schmidt played in the first two games, Taylor Chorney taking over in the last two contests alongside Dmitry Orlov.  Not only splitting games, the two had virtually identical scoring lines (Chorney: 0-0-0, plus-1, 14:06 average ice time; Schmist: 0-0-0, minus-1, 14:16 in average ice time).  Chorney put up better possession numbers in what was a small population of games (60.0 percent Corsi-forat 5-on-5 to 52.3 for Schmidt).  Chorney also had the best PDO at 5-on-5 of any defenseman (111.11) and the best zone start differential of any Caps defenseman (plus-17.8).  He was blessed.

Same old, same old.  Braden Holtby got all the minutes in Week 1.  This was to be expected, since the Caps have yet to play in back-to-back games.  That will change in Week 2, but for now, Holtby is off to a solid start.  He is 13th among 38 goalies having played at least 100 minutes in goal in goals against average (2.04) and is 19th in save percentage (.920).  His .919 save percentage at even strength could be better, but it is also very early in the season.  If one looks at the time line, he was better in the back half of the week (.957 overall save percentage in Games 3 and 4 of the week) than he was in the first half (.889 in Game 1 and 2).

Here is another area where the Capitals picked up where they left off last season.  What is more, they spread the good fortune around.  Four players shared in the five goals (T.J. Oshie had two), and nine players recorded power play points.  T.J. Oshie seems to have settled in nicely in the middle of the 1-3-1 set.  Along with leading the team in power play goals, he is tied for the team lead in power play points (3) and leads the club in shots on goal on the man advantage (6).  From the back line, John Carlson has a power play goal, one of 14 league defensemen to have recorded one, and he is tied for third among league defensemen in power play points (3).  The power play as a whole was quite efficient, going 5-for-22 in shooting (22.7 percent) and had 22 shots on goal in 19:16 of power play time (1.14 shots per minute).

The penalty killing could be split into two parts.  In Game 1 and 2 of the week the Caps were 6-for-8, and in Games 3 and 4 they killed off all five shorthanded situations they faced.  In all, the Caps killed the last eight power plays they faced, going back to late in the first period of their 5-0 loss to San Jose.  The Caps’ efficiency on the penalty kill points to the old adage of the goaltender being the best penalty killer.  Washington, and Braden Holtby, allowed two power play goals on nine shots to open the week, but they slammed the door after that.  San Jose (in the last 43:05 of their contest), Chicago, and Carolina managed no power play goals on the last 15 shots faced while shorthanded.  Overall, opponents shot 2-for-24 (8.3 percent) in 22:41 in power play ice time (1.06 shots per minute).

Without that San Jose game, this statistic would look a lot better.  They all count, though.  As it was, the Caps has 12 players record even strength points for the week.  If there was a surprise there, it was that the team was led by Alex Ovechkin (three points), who appeared in only three games and is viewed in some quarters as more of a power play weapon than one at even strength.  Almost as strange is the two other players with multi-point weeks at even strength – Matt Niskanen and Marcus Johansson (two apiece).

The Caps had a decent week in the circle, dominated by their performance in the offensive end.  For the week, Washington was 60.2 percent to the good in offensive zone faceoffs.  There they were led by Jay Beagle, who was perfect on 14 offensive zone draws for the week, and Evgeny Kuznetsov, who was 14-for-25 (56.0 percent).  Things were not as rosy in the defensive end, where the Caps went 30-for-69 for the week (43.5 percent).  Only Chandler Spephenson posted a mark of better than 50 percent, and that was more a product of few events (66.7 on 2-for-3). 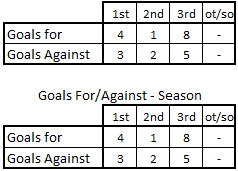 What distinguished Week 1 for the Caps in goals scored by period was their third period performance.  Even the 8-5 margin understates the manner in which the Caps dominated the third period.  San Jose scored a pair of empty net goal in the late going of their 5-0 win over the Caps, pumping up the opponent total.  The Caps finished the week tied in third period goals scored and did so having played fewer games than any of the teams ahead of them or with which they are tied.

It was a good week, even with the flat effort against the San Jose Sharks.  The best face to put on Week 1 is that the Caps came out of it with a 3-1-0 record having missed their top line center for three games and their top scoring winger for a game.  The Caps got good weeks from players from whom much is expected – Alex Ovechkin, John Carlson, T.J. Oshie, Braden Holtby, and even Nicklas Backstrom, who seemed to put a week’s worth of production into his single game.

In the standings, the Caps are positioned between the New York teams in the Metropolitan Division, the Islanders a point ahead of Washington and the Caps tied with the Rangers.  Both the Islanders and Rangers have played one more game than the Capitals.

The Caps now head to the road for the first time this season where they will visit Calgary, Vancouver, and Edmonton, teams with a combined 5-9-1 record.  It is something of a mine field, though.  They get to face a Calgary team that won 23 games at home last season (tied for sixth in the West), but that is 0-3-0 at home so far this season.  You would think they would come out a bit ornery.  Then there is the potential to face long-time nemesis Ryan Miller in goal in Vancouver, finishing up the trip with their first in-person look at Edmonton’s Connor McDavid.  It will be a different sort of benchmarking week for the Caps.

Three Stars:
Posted by The Peerless at 12:34 PM

Email ThisBlogThis!Share to TwitterShare to FacebookShare to Pinterest
Labels: 2015-2016 nhl season, Alex Ovechkin, Braden Holtby, John Carlson, NHL, that was the week that was, the peerless prognosticator, Washington Capitals