The Washington Capitals did it again. They avoided losing consecutive games for the first time this season, posting a 3-2 Gimmick win over the Detroit Red Wings at Verizon Center on Tuesday night. The Caps leap-frogged the New York Rangers into first place in the Metropolitan Division with the win.

Things started well for the Caps, who got a goal from Justin Williams to open the scoring just 43 seconds into the game. The Red Wings were unable to clear the puck out of the defensive zone. Marcus Johansson got his stick on a sliding loose puck at the top of the zone and nudged it to Evgeny Kuznetsov. From there, Kuznetsov circled to the net where Johansson and Williams were also headed. As Kuznetsov closed on the net and tried to get a shot off, he was worked off the puck by Niklas Kronwall. However, Johansson was occupying two Red Wings, and it created an opening for Williams to lean in, stretch out his stick, and slide the puck past goalie Jimmy Howard for a 1-0 lead.

The Caps could not carry that lead into the first intermission, though. Henrik Zetterberg tied the game with 4:20 left in the period when the Red Wings won a battle for the puck off a faceoff in the Caps’ end, and Dylan Larkin found Zetterberg for a tap-in from the top of the crease.

The Caps’ streak of games avoiding consecutive losses was put in jeopardy early in the second period when Tomas Jurco was left all alone at the top of the crease to take a pass from Joakim Andersson and beat goalie Braden Holtby past the left pad.

The game remained 2-1, in favor of the visitors, until midway through the third period. Then, on a power play, the Caps worked the puck down to the front of the Detroit net. Johansson tried to stuff it through Howard’s pads, but the puck squirted out to Howard’s right. Alex Ovechkin darted down from the faceoff circle to snap the puck into the back of the net before Howard could stretch his leg across to defend the shot, and the game was tied, 2-2, at the 10:51 mark.

That would be it for the hockey portion of the contest. In the freestyle competition, T.J. Oshie and Evgeny Kuznetsov beat Howard, and Holtby stopped Gustav Nyquist and Pavel Datsyuk, giving the Caps a 3-2 win.

-- For Alex Ovechkin, his goal was his fourth power play goal of the season, which seems light by his standards. However, through 25 games played last season he had six power play goals. He is one good game off that pace.

-- Marcus Johansson added two assists, and he is on a nice little run of late.  Johansson is 2-5-7 in his last seven games.

-- They were doing oh, so good, too.  That is, until the 2:35 mark of overtime.  The Caps, who are tied for the third-fewest number of minor penalties this morning, took one – courtesy of Alex Ovechkin – in overtime, putting the Red Wings on a 4-on-3 power play.  The Red Wings managed two shots on goal, then took a minor penalty of their own shortly after their power play expired.  Ovechkin got the Caps lone shot on the ensuing power play, but he could not get that second power play goal. 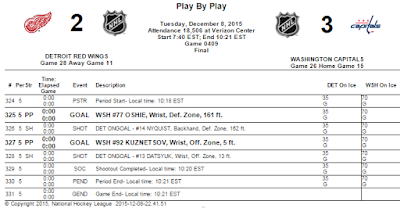 -- The “Chorlov” defensive pair had a rough game.  Both Detroit goals were scored from point-blank range (a combined 19 feet, officially), and both Taylor Chorney and Dmitry Orlov were the defensemen on the ice and not in position to help prevent those scores.

-- Evgeny Kuznetsov gets the all-you-can-eat buffet coupon… an assist, plus-1, three shots on goal, four shot attempts, a hit, a giveaway, two takeaways, two blocked shots, 13 draws taken (okay, he lost nine of them) in 20:46 of ice time.  His assist on Williams’ goal broke a season-long three-game streak without a point.

-- Don’t look now, but with his assist last night, Nicklas Backstrom has points in his last six games (2-5-7) and in 12 of his last 15 contests (5-10-15).  Does anyone put together streaks more quietly than Backstrom?

-- Brooks Laich skated just two shifts in the third period and one in overtime.  His 9:00 in ice time was not his lowest of the season, but he could see it from there (7:16 against the Pittsburgh Penguins on October 28th).

-- The Caps returned to their stingy ways, shots allowed-wise.  The Red Wings finished with 23 shots on goal, breaking a four-game streak in which the Caps allowed more than 30 shots to opponents.  The consistency was nice, too.  Detroit had declining shot totals by period, and in no period did they reach double digits.

It was also good to see Alex Ovechkin score a power play marker, even if it came more from being opportunistic than from a standard set-play one-timer (watching Ovechkin jumping on a loose puck in front of the net brings to mind the adjective “rabid”).

There is no rest and no time to ponder the win, though, for the Caps head out on the road for a three-game trip – two games in Florida against the Panthers and the Lightning, and one in Pittsburgh.  It will be a test of a trip.

Unknown said...
This comment has been removed by a blog administrator.
10:47 PM