Few defensemen have been as durable and productive over the past three seasons as Matt Niskanen.  In his three years with the Capitals, Niskanen is one of six NHL defensemen to have appeared in at least 240 games, logged at least 5,500 minutes, and recorded at least 100 points (he has 242 games, 5,585 minutes, and 102 points).  And quite a list it is, too.  Niskanen accomplished the feat as an example of consistency.  Although he missed four games in 2016-2017 (his first games missed as a Capital), he recorded five goals (compared to five and four in his previous two seasons) and 39 points (an improvement over the 31 and 32 in his first two seasons with the club).

Niskanen’s consistency extended into his segment to segment production in ten-game pieces.  In eight ten-game splits (12 games for the last one), he recorded between four and eight points, but in five of them he recorded four or five points.  He was a “minus” player in just one of those ten-game splits (minus-2 in Games 11-20).

Where Niskanen’s performance numbers were down was in his shifts per game.  With 26.0 shifts per game this season he averaged the fewest in any of his three years with the Caps, although it was still the eighth-highest number of shifts per game for Caps defensemen over the last three seasons.  And those shifts were a reflection of the team’s success.  Washington was 34-6-8 in the 48 games in which he skated 26 or more shifts, 21-13-0 in the games in which he skated 25 or fewer shifts.  As far as ice time was concerned, 21 minutes was a reasonable threshold as an indicator of wins and losses.  The Caps were 45-9-7 in games in which he logged more than 21 minutes, 10-10-1 in games he logged fewer than 21 minutes or did not dress. 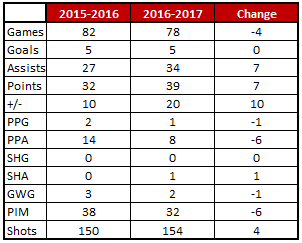 Fearless’ Take… Niskanen has been one of the most durable and productive defensemen of the last decade.  He is one of only 11 defensemen over the last ten seasons have appeared in at least 700 games and recorded at least 250 points.

Cheerless’ Take… Matt Niskanen has played a lot of games, logged a lot of minutes, and even has a fair number of points, but as a Capital, efficiency hasn’t been his thing.  This was the third straight year of declining shooting percentage – 3.2 percent after 3.4 percent and 3.3 percent in his first two years in Washington – after posting consecutive years of 6.0 percent or better with Pittsburgh.  Maybe they just have better setter-uppers.  And this year’s shooting percentage happened as he had his highest shot total (154) with the Caps after a 117-shot year in his first season in Washington followed by a 150-shot season.

Odd Niskanen Fact… Matt Niskanen was born in Virginia, Minnesota, “Queen City of the North” (no, there is no “Minnesota, Virginia”), the birthplace of no fewer than eight pro hockey players (three of them named “Carlson,” two named “Cullen”), not bad for a town with a population under 9,000.  And on ice, the Caps did not lose a game in regulation this season in which Niskanen had a multi-point game (9-0-1, the only loss that weird 8-7 overtime loss to Pittsburgh on January 16th).

There are games where just about everything goes right for a team and for a player, and it is memorable when one of those times is against a hated rival.  Such was the case on January 15th when the Caps hosted the Flyers in a Sunday afternoon game televised nationally.  It didn’t start that way for the Caps as they and their guests played to a scoreless first period and almost half of a second period without a score.  Nine minutes into the second period, though, Andre Burakovsky scored an unassisted power play goal.  That was the lead the Caps took to the third period, but it did not take Justin Williams long to add to it with a goal with just 1:36 gone.

And then, Niskanen dropped the hammer with a pair of goals barely two minutes apart.  The first came off a sloppy Flyer turnover at the Capitals’ blue line that allowed Nicklas Backstrom to break free.  Reaching the Flyer zone, he fed Alex Ovechkin for what seemed sure to be a one-timer from the left wing circle.  However, Ovechkin spied Niskanen filling in down the middle and fed him for a tap in from the top of the crease to make it 3-0…

Just over two minutes later, Tom Wilson did some of the heavy lifting, carrying the puck down the left wing in the Flyer end and circling around the net.  When he popped out the other side to goalie Steve Mason’s left, he slid the puck out to Niskanen, who stepped into a one-timer from the right point that Masonn misplayed off the top of his glove and into the net to make it 4-0, 5:47 into the third period and sealing the deal in a 5-0 win.  It was one of two two-goal performances for Niskanen this season, and he finished the contest with a season-best plus-4.  It was the second time in his career that Niskanen that Niskanen had a plus-4 game, the other coming in his rookie season with the Dallas Stars in a 6-3 win over the Nashville Predators on February 23, 2008.

Matt Niskanen appeared in each of the Caps’ first 24 games of the season, extending his consecutive games streak with the club to 188 games.  Taking the ice for consecutive game 189 against the Boston Bruins should have been unremarkable, and it was.  It was the cutting short of his evening that was remarkable.  Niskanen last seven shifts into the game and was already a plus-2 form a pair of Justin Williams goals in the first eight minutes of the contest.  But with less than five minutes in the first period, niskanen was chasing a puck to the end boards and looked to be losing his footing when Patrice Bergeron did the rest, cross-checking Niskanen into the end wall head first.  That ended Niskanen’s participation in that contest, a 4-3 overtime Caps win as it turned out, and he missed the road trip to Buffalo that followed and what would be his first missed game as a Capital.

Matt Niskanen had a postseason bordering on the bizarre for the Caps.  The team split the four games in which he had points and lost the only game in which he had a goal.  Then there was the night he skated just 2:09 against the Penguins, in Game 3 when Sidney Crosby sustained what appeared to be a concussion when he was charging to the net, was hit by Alex Ovechkin’s stick, then cross-checked in the head as Crosby was stumbling forward.  Niskanen earned a major penalty for cross-checking and a game misconduct for his infraction, forcing the Caps to play with five defensemen for more than two full periods in what would eventually be a 3-2 overtime win.  That goal he scored – in a Game 2 loss to the Penguins – was his first postseason goal with the Caps.  Then there was the physical play.  His 45 credited hits for the postseason was the third-most in Caps history since hits became a statistic in the 2005-2006 season.  As it was, only four defensemen had more credited hits for the entire postseason, and of that group, only Edmonton’s Matt Benning played in fewer games (12).  At the other end, he tied with John Carlson and Nate Schmidt for second-most points among Caps defensemen in the postseason.

Matt Niskanen is among the better two-way defensemen in the NHL, but this season he appeared to display an edgier side to his play.  It was not unwelcome.  The Caps were 11-3-0 in games in which he was charged at least two minutes in penalties; they were 14-4-3 in games in which he was credited with three or more hits.  His postseason was an improvement on 2016, scoring-wise (he was 0-3-3 in 12 games in the 2016 postseason), and he did it while averaging his fewest minutes in the postseason as a Capital (22:38, although that early exit against the Penguins in Game 3 depressed that number).  Niskanen took care of business more consistently than perhaps any other defenseman, if not any other player, over the course of the season.  He rarely had what could be called a poor game, even in the postseason (save for that whole Crosby cross-check thing).  In a way, he was the defense equivalent of Nicklas Backstrom, a player to plays at his own pace and to the extent he can from his position bends the game to that pace.  It was a solid overall year for Niskanen.