The Peerless Prognosticator is ON THE AIR!!! -- Game 34: Capitals at Lightning, December 14th

The Washington Capitals embark on the first leg of a three-game road trip on Saturday night when they visit the Tampa Bay Lightning at Amalie Arena.  The Caps shook off a 5-2 loss to the Columbus Blue Jackets on Monday with a 3-2 win over the Boston Bruins on Wednesday for their seventh win in eight games.  The Lightning might finally be waking up from their long slumber to start the season.  After dropping four of six games (2-3-1), they have won two in a row, both by one-goal margins, a 2-1 win on the road against the Florida Panthers on Tuesday and a 3-2 win over Boston on home ice on Thursday. 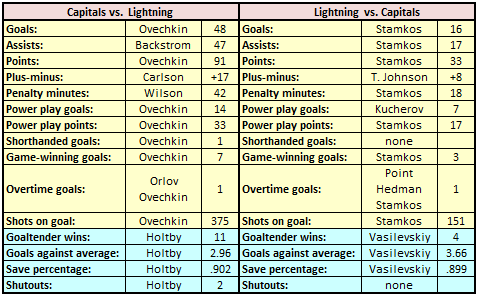 The Lightning have a veteran defensive group.  Of the eight defensemen to dress this season, six are age 29 or older.  At the other end, as the youngest defenseman in the group, is Mikhail Sergachev.  The 21-year old, former ninth overall draft pick (2016, by Montreal) is in his third season with the Lightning after spending four games of the 2016-2017 season with Montreal and then being traded to Tampa Bay with a conditional second round pick in the 2018 Entry Draft for Jonathan Drouin and a conditional sixth round pick in the 2018 Entry Draft.  Sergachev had a fine first season with the Lightning, going 9-31-40, plus-11, in 79 games in 2017-2018.  His nine goals tied for second among rookie defensemen (with Thomas Chabot), trailing only the New York Islanders’ Ryan Pulock (10).  His 31 assists trailed on New Jersey’s Will Butcher (39) among rookie defensemen, and he and Butcher were the only rookie defensemen to post 40 or more points, Sergachev with 40 and Butcher with 44.  He slipped a bit last season, posting six goals and 32 points in 75 games.

This season, Sergachev is back to averaging just over a half-point per game (4-12-16 in 30 games).  He arrived at those totals to date in a roundabout way.  He had six points (all assists) in his first five games, but then he went 0-3-3 in his next 13 games.  He got hot again, going 4-3-7 over the following eight games, but he is now without a point in his last four contests and managed only two shots on goal over those four games.  Watch his ice time.  In 12 games in which he skated less than 18 minutes, the Lightning are 9-1-2, while they are 7-10-1 in the 18 games he skated more than 18 minutes.  Sergachev is 1-2-3, even, in seven career games against the Capitals.

He led the league in goalie wins in 2017-2018 (44).  He did so again last season (39).  Both years, he was a Vezina Trophy finalist, winning the prize last season while also being named as the goalie on the league’s first team all-star squad.  However, there are lingering doubts about Andrei Vasilevskiy being in that elite group of NHL netminders, and that is a product of an iffy postseason record (15-15, 2.83, .912).  If anything, that playoff record has deteriorated over time.  In his first 22 postseason appearances, Vasilevskiy was 12-7, 2.51, .923.  In his last 11 appearances, he is 3-8, 3.41, .890, and he has lost his last six decisions.  Until that record changes, there will be those lingering doubts about whether Vasilevskiy is in that top echelon of NHL goaltenders.

In that regard, perhaps his start to the 2019-2020 season will take some of the heat off, if only because he is off the pace he set over the previous two seasons.  His 2.78 goals against average in 22 games would, if he finished the season there, be his worst in six years in the NHL.  His .910 save percentage is within rounding error of his worst season (2015-2016, when he appeared in only 24 games).  He does not yet have a shutout this season after posting a total of 14 over the previous two seasons.  Vasilevskiy has already lost eight games in regulation this season.  He did not suffer his eighth loss in regulation last year until March 7th and had only ten all year.  And, streakiness has crept into his game.  Starting on November 1st, he had a four-game stretch with an aggregate save percentage of .875.  He followed that up with a three-game stretch with a .941 save percentage.  Then, it was four games with a .876 save percentage.  And now, he goes into the game against the Caps with a three-game streak with a .958 save percentage.  Vasilevskiy is 4-5-1, 3.66, .899 in ten career appearances against Washington. 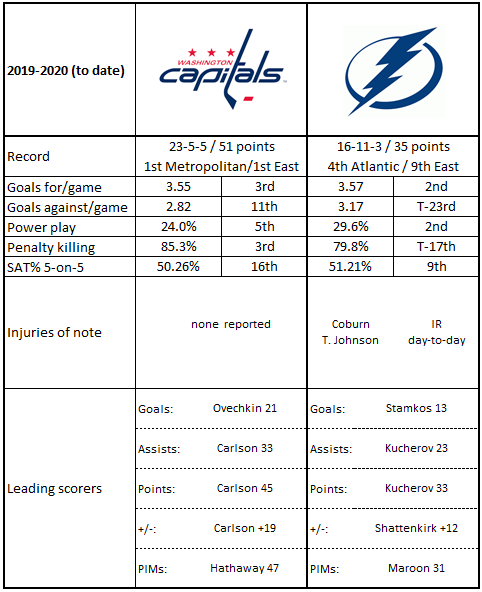 1.  Only three teams have fewer standings points earned on home ice than the Lightning (17) through Thursday’s games – Ottawa (16), New Jersey (13), and Detroit (11).  The Lightning already have six losses in regulation in 15 games on home ice; last season they had a total of seven in 41 home games.

2.  No team in the league has more power play goals scored on home ice than Tampa Bay (21), and they have the league’s best home power play (36.2 percent).  On the other hand, their 37 even strength goals on home ice are ranked in a tie for 19th place with New Jersey and the New York Rangers.

5.  Tampa Bay has a positive shot attempts differential at 5-on-5 on home ice in almost all situations: when ahead (plus-19), when behind (plus-101), in close situations (plus-9).  Not when tied, though.  Their minus-29 is fourth-worst in the league in those situations.

3.  Washington has spent more time on the road than any other Eastern Conference team in killing penalties (108:57).

4.  No team has been charged with more giveaways on the road so far than the Caps (179).

5.  John Carlson has 27 points on the road this season.  By itself, this would rank fifth in total points among defensemen through Thursday’s games.

From February 19, 2011 until February 27, 2017 a span of time that encompassed defenseman Kevin Shattenkirk’s tenure with the St. Louis Blues, Shattenkirk was 11th in total goals scored by defensemen (59), ninth in assists (199), ninth in points (258), tied for fourth in power play goals (32), second in power play points (129), ninth in personal shot attempts differential at 5-on-5 (plus-958).  He was even second among defensemen in Gimmick goals scored (eight).  Little wonder he was considered the prize among players available at the 2017 trading deadline.

And then he came to the Caps.  It did not go well.  His regular season numbers were good enough (2-12-14, plus-4, in 19 games), but he was 1-5-6, minus-4, in 13 games in the postseason, and there weren’t many tears shed when he signed in the ensuing offseason as a free agent with the New York Rangers.  Starting with his stay with the Caps through last season, he played in 138 regular season games with Washington and the Rangers, went 9-56-65, minus-25.  The goal total was tied for 93rd among defensemen over that span, the assists were tied for 40th, the points were tied for 60th.  He had four power play goals (tied for 44th) and 26 power play points (tied for 30th).  There didn’t seem to be many tears shed in Manhattan when he signed with the Lightning as a free agent last July.

He has rehabilitated his image, to a point, with the Lightning.  Through 30 games he has five goals, almost his total in 119 games with the Rangers (seven), and his 22 points put him on a 60-point pace that would eclipse his total of 51 with the Rangers.  Part of the solution might be in a simplified role.  He is getting a lot less power play ice time (1:38 per game) than he had in any of his previous nine seasons (almost a full minute less than he had with the Rangers last season (2:26) that was his previous low average).  On the other hand, he is getting more even strength ice time (17:09 per game) than he had in either Washington or New York.  In 18 career games against the Caps, Shattenkirk is 1-6-7, minus-2.

There are some players of whom it could be said, “he could fall out of bed on his 50th birthday and put up points.”  Nicklas Backstrom did not fall out of bed, and he is not yet near his 50th birthday, but he did miss eight games with an upper body injury before returning to the lineup against Columbus last Monday.  Backstrom had a goal and an assist in that game, and then he followed it up with an assist against Boston on Wednesday to give him points in five straight games, a streak interrupted by that injury absence.  He has averaged a point per game over his last dozen games (3-9-12).  Scoring at a point per game pace is not new for Backstrom.  Among the 103 Capitals to dress for at least 200 games with the club, he is fourth in points per game (0.97), trailing only Mike Gartner (1.04), Alex Ovechkin (1.11), and Dennis Maruk (1.26).

Backstrom is closing on other personal milestones.  With two more assists he will become the first player in team history with 700 career assists with the club.  Six more points, and he will become the second player with 900 points (Ovechkin has 1,244).  He is already the all-time leader in plus-minus, but with a plus-2 in this game would hit the plus-120 mark for his career.  With six power play points he would pass both Brothers Sedin, Daniel and Henrik, on the all-time ranking in power play point among players born in Sweden with 370 power play points.

The odd part of Backstrom’s performance this season is not the points, though.  It is the absence of them.  The Caps are 6-1-3 in games in which he went without a point, 11-3-1 in the games in which he had one or more points.  Backstrom is 13-47-60, plus-9, in 50 career games against the Lightning.  Those 60 points against the Lightning are the most he has against any NHL team in his career.  Since he came into the league in 2007-2008, only Ovechkin among all other players has more points against Tampa Bay (72).

The Capitals have had good luck recently in Tampa, earning points in eight of their last ten visits (6-2-2), outscoring the Lightning, 36-32.  Over those ten games, the Caps have power play goals in nine of them (12-for-31 overall, 38.7 percent) while allowing only five power play goals to the Lightning in 28 chances (17.9 percent).  It is on that which the result might turn, the Caps ability to make the Lightning pay for playing outside the rules.