The Peerless Prognosticator is ON THE AIR!!! -- Game 31: Capitals at Ducks, December 6th

The Washington Capitals will wrap up their annual California trip on Friday night when they visit the Anaheim Ducks at Honda Center.  The Caps go into the contest winners of five in a row, sharing the second longest winning streak in the league at the moment with Philadelphia to Boston’s eight-gamer.  Since winning consecutive games to end October and begin November, the Ducks have struggled, going 3-6-4. 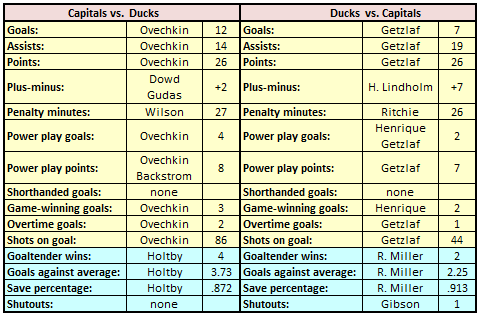 The list of all-time goal scoring leaders for the Ducks is sprinkled with familiar names.  Teemu Selanne (457 goals as a Ducks, tops all-time), Corey Perry, Paul Kariya, Ryan Getzlaf.  Even casual fans would recognize these names.  Fewer would recognize that of Rickard Rakell.  Now in his eighth year with the Ducks, the former first-round draft pick (30th overall by Anaheim in 2011) ranks seventh on the all-time Ducks goal scoring list (122).  He might have ranked higher but for a setback last season.  After three seasons in which his goal scoring progressed from 20 goals to 33 and then to 34, Rakell posted 18 goals in 69 games, losing 13 games to an ankle injury last year.

This season, Rakell gave indications that he was back to his productive ways with three goals in his first seven games, but then he went nine games with four assists and no goals on 19 shots.  He had points in three of those nine games, all Anaheim wins, in a stretch in which they were just 4-4-1.  He broke out of that slump with a goal in a 4-2 loss to Minnesota on November 5th, and that set off one of those perverse kinds of stretches that befuddle observers.  Starting with that goal against Minnesota, Rakell has five goal in his last 12 games.  All of those goals came in losses (0-4-1).  The Ducks are 3-2-2 in the seven games in that stretch in which he did not score a goal.  In ten career games against the Caps, Rakell is 3-3-6, minus-3.

Through Wednesday’s games, 18 rookies had reached the ten-point mark.  One of them had the almost comic-book hero sounding name of forward Sam Steel, who is 2-8-10 in 24 games to date.  Steel was the last pick of the first round in the 2016 Entry Draft, a product of the Regina Pats program in Canadian junior hockey.  He spent two more years with the Pats, posting 83 goals in 120 games before graduating to the San Diego Gulls of the AHL last season, where he went 17-17-34 in 47 games.  Steel also dressed for 22 games with the Ducks last season, not far under the maximum number of NHL games played to qualify as a rookie this season (25), and went 6-5-11.

Steel started this season with a 17-game streak without a goal, but he did manage to record eight assists over that stretch.  He scored his first goal of the season on November 18th in the Ducks’ first meeting against the Caps this season, his first career power play goal 5-2 loss in Washington.  His other goal in his last seven games was also recorded in a loss, a 4-3 Gimmick loss to Arizona on November 27th.   That November contest against the Caps is his only career appearance to date against Washington.

The 2012 Entry Draft was loaded with defensemen.  Eight of the first ten picks were blueliners.  Among them was Hampus Lindholm, a defenseman out of Rögle BK in the Swedish Hockey League, taken by the Ducks with the sixth overall pick and the fourth defenseman taken in that draft behind Ryan Murray (Columbus), Griffin Reinhart (New York Islanders), and Morgan Rielly (Toronto).  After spending a year with the Norfolk Admirals in the AHL, he moved up to the Ducks for the 2013-2014 season and has been a fixture on the blue line ever since.  In six-plus seasons with the Ducks, Lindholm already ranks fourth all-time in games played by an Anaheim defensemen (467), fourth in goals (48), fourth in points (183), first in plus-minus (plus-88), ninth in power play goals (10), tied with Chris Pronger for sixth in game-winning goals (eight), and he is one of four defensemen since the league began recording time on ice statistics in 1997-1998 to record more than 10,000 minutes of ice time.

This season, Lindholm’s performance breaks into two parts.  In neither part does he have a goal, but the assist patterns are different.  He posted single assists in six of his first nine games this season, five of them in Duck wins.  In his last 11 games he also has six assists, but those came in a pair of three-assist games, one in a 5-2 win over Colorado on October 26th, and the other in a 4-2 win over Los Angeles last Monday.  Lindholm is 4-8-12, plus-7, in 12 career games against the Capitals. 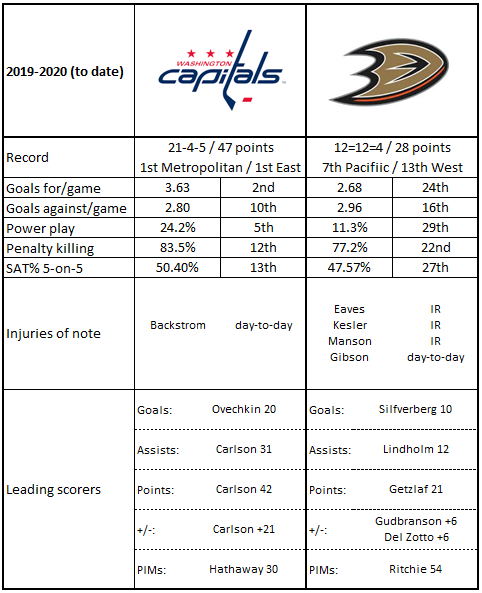 1.  As much as Anaheim has struggle this season, their home record is not bad.  At 8-5-2 on home ice, their 18 standings points earned at home are tied for tenth through Wednesday’s games.

2.  What the Ducks do not seem to be doing at home, though, is “playing” well, at least in terms of shots for and against.  They have allowed 54 more shots on goal on home ice (482) than they have recorded (428), and their minus-70 in shot attempts at 5-on-5 is fourth-worst in the league, owing to a second-highest total of 737 shot attempts allowed at fives.

3.  The Ducks are also a team that enjoys few chances to make good on power plays.  They have had 38 power play opportunities in 15 games, the third-lowest total of power play chances on home ice tin the league.  Small wonder that their four power play goals scored on home ice are tied with Ottawa for fewest in the league, and the Senators have played three fewer home games.

5.  Anaheim spends a lot of time killing penalties at home, 81:46, in fact.  That’s the fifth highest shorthanded ice time total on home ice in the league.  Of course, one could reason that away that the Ducks kill a lot of penalties, but their home penalty kill ranks just 15th (83.3 percent).

2.  Tom Wilson’s empty net goal against Los Angeles on Wednesday was the Caps’ sixth empty netter on the road this season, most in the league in road games.  Their nine empty netters overall also lead the league.

3.  Only Vancouver has been shorthanded more times on the road (66) than the Caps (59, tied with Calgary).

4.  Turnovers are a feature of Caps road games.  Their 168 charged giveaways in road games are most in the league, while their 118 takeaways are tied for second with Calgary, behind Edmonton (125).

5.  The Caps remain skilled marksmen on the road, their 11.9 shooting percentage tops in the league.

John Gibson is ill. It has kept him off the ice for several days, and Ryan Miller is expected to get the start against the Caps on Friday night if Gibson is not sufficiently recovered.  It is not as if Miller is an unknown to the Caps.  If he does get the call, it would be his 35th career appearance against the Caps, third-most among active goalies, behind Henrik Lundqvist (42) and Marc-Andre Fleury (41).  And although no one wants to entertain the possibility, a win would make him the third goalie with 20 or more career wins against the Caps (Fleury has 23, Lundqvist has 22).  Then again, if he loses in regulation (cue the cheering Caps fans), he would stand alone among active goalies in career losses in regulation to the Caps (he would have 15).

Miller is past his time as a number one goalie, but he has settled into his role as mentor and backup for Gibson.  In two-plus seasons in Anaheim, he is 24-14-10 with a 2.60 goals against average in 56 appearances.  His .919 save percentage with the Ducks is the best he has among the four franchises for which he has played (Buffalo, Vancouver, and St. Louis in addition to Anaheim).  His record this season was disturbing to start. He stopped 26 of 27 shots in his first appearance of the season, a 2-1 win over Columbus on October 11th.  But after that, the goals allowed totals just grew.  He allowed two in three consecutive games (one a 20 minute stint in relief of Gibson against Nashville in a 6-1 loss on October 22nd), then it was three, then four, and finally six in a 6-2 loss to Tampa Bay on November 23rd.  He did, however, stop 34 of 36 shots in his last outing, a 4-2 win over Los Angeles on Monday.  Miller is 19-14-0, 2.53, .916 with three shutouts in 34 career appearances against the Caps.

When you are drafted in the sixth round, and you are assigned the sweater number 72, the writing is on the wall that your prospects as an NHL player are, at best, uncertain.  That was how Travis Boyd started his climb to the NHL, taken out of the USNTDP program with the 177th overall pick of the 2011 Entry Draft and getting that comparatively high sweater number than often identifies the player who is not expected to contend soon, if at all, for a roster spot (yes, there are exceptions like John Carlson’s “74” or Braden Holtby’s “70”).  And it was not as if the climb to the NHL was easy or brief for Boyd.  He spent the next four years in the University of Minnesota program, then on to the Hershey Bears in the AHL.  He did not reach the NHL until the 2017-2018 season, when he appeared in eight regular season games for the Caps.  But he also got a game in the 2018 playoffs, skating 12 minutes in the Caps’ 2-1 overtime win over Pittsburgh to clinch the Eastern Conference semifinal series against the Penguins.  Boyd followed that up with a 53-game season with the Caps last year, displaying a scoring touch (five goals, 20 points) that might not have been expected.

His growth and development presented the Caps with what would become a difficult decision that the team would finally make this past week.  Who would the team take moving ahead as the 13th forward, a situation that came to a head when Carl Hagelin was about to be returned to action from injured reserve?  Would it be Boyd or Chandler Stephenson?   In no small part, it was a matter of managing the salary cap, and Boyd’s $800,000 cap hit was more manageable than Stephenson’s $1.05 million cap hit.  Stephenson was traded to Vegas for a fifth-round draft pick; Boyd remained a Capital.  Boyd is a bit behind last year’s goal-scoring pace, with just one goal in 15 games.  His point production is a bit ahead of last year, though, with seven points in 15 games.  He is in a bit of a slump, though, with one point in his last seven games after going 1-5-6 in his first eight games of the season.  Boyd has one assist in his only appearance against the Ducks, in the 5-2 win over Anaheim on November 18th this season.

Anaheim resembles the Caps just defeated, the Los Angeles Kings, but are slightly better.  A little more offense (2.68 goals per game to 2.52), a little more defense (2.96 goals per game to 3.31), equally anemic power play (11.3 percent to 11.2 percent), and iffy penalty killing (77.2 percent to 75.3 percent).  The difference, though, is that the Caps were sandblasted by the Ducks in their last three visits to Anaheim, losing by scores of 5-2, 4-0, and last year a 5-2 margin.  It would do well for the Caps to take the Ducks seriously, even if they are struggling, and the team might be looking forward to getting home after a four-game road swing.  Let’s flip the script.